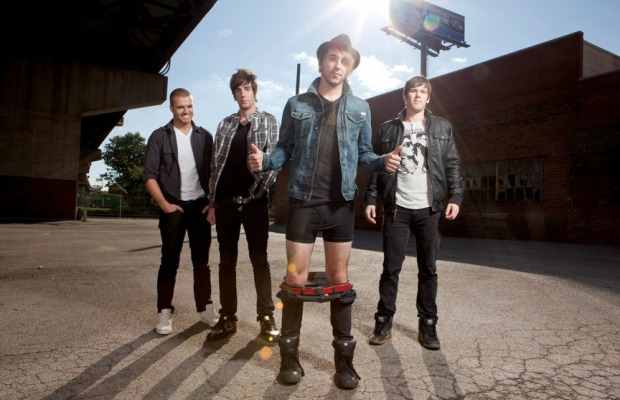 After skyrocketing to pop-punk stardom in the late ‘00s, All Time Low headed to the majors for 2011’s Dirty Work with Interscope. Realizing their music doesn’t lend itself to the current major label model—“[Major labels] are trying to sell singles, and the kind of music we play doesn’t lend itself well to that,” frontman Alex Gaskarth says—the band jumped ship and recorded their follow-up independently. Now rejoining Hopeless, who released So Wrong, It’s Right (2007) and Nothing Personal (2009), AltPress.com caught up with Gaskarth to discuss the re-signing, the upcoming album and the freedom of being an independent band again.

All Time Low have officially re-signed with Hopeless. How did it happen?
It was a process that came naturally. Having worked quite a good ways through the record independently, [we] started reaching out to various labels to see what the prospect was of us signing with different companies. It was a good situation in the sense that it was the first time in a long time that we got to sit back and mull over a decision and make the decision that was absolutely, 100 percent what’s best for us. A lot of the time, especially when you’re a young band or when you’re already in a deal, as was the case Interscope, you have to make a few compromises because that’s the only way you’ll get it done. But, this time around, we were in [a] unique position where we were able to ask for exactly what we wanted and see who was willing to give [us] that.

There are lots of people and a lot of labels that we love, so everybody reached out and we sat down and talked with a lot of people. What ended up happening was [along with] that sense of familiarity and family that we had established with Hopeless, they came to us with a really cool and forward-thinking deal. It was offering a very equal-opportunity and beneficial situation for everyone, which I think is sort of the wave of the future, especially with independent labels. Not to mention, we just love everybody there. We know they love us and we know that they love the band—that’s really the biggest selling point at the end of the day.

Hopeless released So Wrong It’s Right and Nothing Personal, so in a way, did it feel like you were coming home?
Yeah, I think in a big way. It’s a new start and a different approach this time around, but it definitely does feel like home. It’s coming back to something very familiar. We know everybody over there really well, and most of the team really hasn’t changed. We know they’re going to do a great job, that they know how to handle our band—and I think that’s probably the most exciting part of it all.

You’ve been fairly vocal recently with your frustrations around Dirty Work’s release and your time with Interscope. Do you feel more comfortable putting this new work into the hands of people you have a personal relationship with? Absolutely. I think that makes all the difference. I have been vocal, but at the same time, by no means do I think it’s really anyone’s fault with [Dirty Work]. It’s one of those “that’s the way it goes” situations. It was a bummer, and I wish we’d had a little more foresight to see that it was going to happen. But when you’re in the moment, it’s very hard to think like that. You want to be optimistic and stoked on what you’re doing, but it was one of those typical cases where the floor just dropped out underneath us. A lot of [our team at the label] were displaced and rearranged, so by the time the record was out, everybody that had been working on the album wasn’t there anymore, so we had a whole new team that didn’t really “get” us. It ended up being okay in the sense that they ended up letting us go to pursue new things.

What can you tell us about the new album?
What I can say that we are definitely gearing up for a fall release. We want to have it out this year, and I think the sooner the better. Realistically, we won’t get it out this summer, but [that’s why we] went ahead and released one song from the album ourselves—to start setting [the release] up. I think it’s going to be a great partnership again. Looking back to Nothing Personal, I think that was one of the more successful debuts we’ve had from a record, and I expect nothing less. I think everybody’s really excited to just go for it.

We don’t want to announce record titles or song names or anything quite yet, but I think in the coming weeks and months, you’re going to see more and more starting to spill out, which is really exciting.

You wrote a lot of this record independently, but you’ve worked with a vast amount of people in the past with co-writers and producers. The phrase that comes to mind is that this time around, there were “less cooks in the kitchen.” How has that worked out for you, and why did you choose to do it this way?
With Nothing Personal, we split it up between producers. There were less co-writes, [but there] was more diversity among producers. With [Dirty Work], there were those opportunities and moments where it was like, “Go write a song with this person, and then have this person produce it.” It was a very major-label approach, and that does work sometimes. I learned a lot and I got the opportunity to work with some incredible people, but I think the reason for the new approach this time was that it felt like it was the right time for us to flex our own muscle, and to show people what we’re capable of on our own.

I think the fact that there were all these people to fall on with the success and faults of [Dirty Work], people pointed the finger in all different directions. “Oh, it was the major label. Oh, it was the co-writers. Oh, Alex can’t write his own songs. Blah, blah, blah.” This time around, it was just time to establish the fact that, “Hey, this is the music we write. This is what I’m writing regardless of who’s involved.” There’s really no one to take the blame but us this time. If you love it or hate it, it’s All Time Low. There’s no curveball. There’s no forks in the road. It just is what it is, and I think that really makes it a solid album.

When you guys were in the studio, you weren’t saying too much. Who did you guys do this record with? Where did you record at?
We recorded in L.A. with Mike Green, who did five or six songs off the last record. They were actually five or six of my favorite songs on the record, tracks like “[Under A] Paper Moon,” and “Guts” and “Heroes,” and some of the songs I really think are some of the best songs we’ve ever written and recorded as a band that may have gotten lost because of the focus on the stronger singles and whatnot. I think it was a no-brainer to go with the guy who felt the most natural, and he really kind of complements us as a band. He feels like a fifth member. Like, he pulls everything together. So, we went with Mike Green, and Neil Avron is mixing it, so he’s making it sound all purdy.

You also recently announced your collaborations on the record, which include Jason Vena from Acceptance, Cassadee Pope and Anthony Raneri of Bayside. How did those come about?
I like to say that it kind of came together in a much more natural way than some guest appearances are. Cassadee, for example: We were working on the demo and she just happened to come in with Rian [Dawson, drums], and I was like, “Hey, why don’t you sing this harmony? Fuck it. Who cares?” She stepped up to the mic and sang it, and we were like, “Wow. That actually makes the chorus sound rad.” So, we just kept it. It was one of those things where it was a lot of friends and a lot of just people hanging out and we wanted to get them somehow on the album.

What do you want people to know about where you guys are headed and your signing with Hopeless?
Above all else, it’s really just that we’re in it for the long haul. I think because [Dirty Work] was kind of left dead in the water halfway through, people thought it might be the end for the band. We’re in it to do this as long as we possibly can, and we love the music we write. We had a blast with the last record despite some of the shortcomings, and I think now is the time to pave the way for a new brand of All Time Low. One that is much more self-sufficient and knows quite a bit more than it did in its previous form. Expect to see us on the road a lot. Expect us to go hard on this album. We’re really excited, and just looking to the future and really happy to be partnered with people that give a shit.