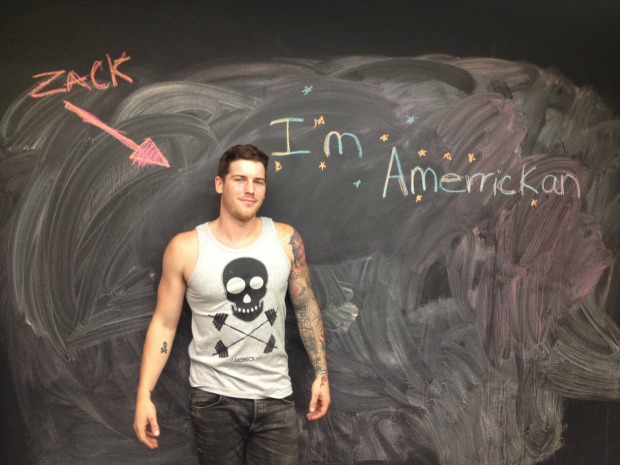 Zack Merrick isn’t just the bass player for All Time Low (whose new album, Don’t Panic, comes out today). He’s also a kick-ass designer for his own tee and accessories line, Amerrickan, distributed by Kill Brand.  We caught up with Merrick while he was prepping for ATL’s World Triptacular global release event for Don’t Panic and “The Rock Show At The End of the World” tour to ask him some burning questions—like how the hell does he manage to run a clothing line while touring the world?

How did Amerrickan start?
I was really into taking photos on the road and making prints of the images, [that were] kind of cluttered, but still one complete image.  I’m friends with Jonny Smith, the owner of Kill Brand, and he always talked about how much he loved the pictures and wanted to try to use one for a T-shirt design. I let him, and the tee was picked up by [the online clothing retailer] Zumiez. We were calling it the “Zack Merrick collection by Kill Brand”, which was obviously too long. At the time, Ryan [Ogren] from the band Runner Runner made a joke that we should write I AM-MERRICK-AN on a shirt. That actually birthed the Amerrickan name.

Where does your design inspiration come from?
Inspiration comes from whatever just pops in my mind. Ironically, some of the things I have said in interviews we put on T-shirts, and people seem to really like them. I mostly wear plain T-shirts, so it’s fun to try and design something on a blank canvas. Whatever I think is cool or funny, the Kill Brand designers can make in a few hours. I like ketchup, so it goes something like this: “Hey, let’s try a shirt with a cat wearing a beer helmet, and instead of beer we put ketchup bottles in the helmet and have it say CAT-SUP.”  We actually did that.

Who are your “Amerrickan role models”?
I think having a strong will inspires me. Do anything you want and don’t be afraid to go for it. Recently, I went to the Baltimore Ravens football practice and was watching Ray Lewis. I was really inspired and moved because he is a very motivated guy and a leader. He does not say no, he does not give up, he just keeps going.

What do Amerrickan’s clothes say about the person wearing them?
Usually if someone is wearing an Amerrickan shirt, they’re a loyal All Time Low supporter. It's like patriotism toward the brand. I hope that people feel cool when they wear it, like they are part of something, since Amerrickan is not a huge, corporate clothing line.

What is the best thing about having your own clothing line?
The best part is I get tons of free clothes!

You have a new line and a new album coming out within days of each other. How do you balance the band and Amerrickan?
I say this a lot: make time! It’s like every situation in life–a wedding, a kid’s baseball game, or even going to the gym. At the end of the day, you can do whatever you want if you put in the effort.

Any funny moments involving ATL and Amerrickan that you can share?
Not to bring up the Ravens again, but it is football season. The other day at the Ravens practice, Bernard Pollard and Rian [Dawson, ATL drummer] ended up having a drum off.  Also, it's well known that Jack [Barakat, ATL guitarist] can't drive very well, so I said at one point [during the practice], “We didn’t wanna die, so we didn't let Jack drive,” and we made that a shirt design.

What does the future hold for Amerrickan?
We have stuff coming out at least every two months. Kill Brand keeps me on my toes, keeping everything fresh and limited edition so we don’t saturate the market. We just put out Halloween designs, and this week we start the VOTE AMERRICKAN. We are selling everything on iamamerrickan.com (http://iamamerrickan.com) for now.  I'm just livin’ day by day.

What fashion trend do you wish would die a slow, painful death?Bright neon shirts with zebra patterns that say “party” on them.

What advice do you have for kids who want to do what you do?
If your really want to do it, you can make it happen; just give it 100 percent and anything can happen.

FIVE FAVES as chosen by Zack Merrick
1. Amerrickan Ravens crest tee, $20
“’Cause I love football and the Ravens. I just thought it would be a cool spoof tee to give to the band and my friends to wear to games. This is our yearrr!”

2. Amerrickan Skull logo tank, $14
“We have a skull logo with guitars under it that I really like, but we added the weights to match what I do: I work out. I just said that like LMFAO.”

3. And That’s What’s Up unisex tee, $14
“Kill Brand dudes noticed that I say “That’s what’s up” about anything I agree with, or that we are gonna make. They made me a shirt as a joke, and I ended up using it.”

4. Amerrickan Anchor wallet, $15
“This wallet is cool ’cause it’s custom made. I have a stealing-hotel-room-keys problem, so the extra pockets are great for stashing my stolen keys.”

5. Sugar Skull logo tee, $22
“This is our newest shirt. I just think it’s a cool design. We did this for Halloween, so it’s limited edition.”

Want more? Yeah you do! Get 25% off your entire purchase (and that means EVERYTHING, not just Amerrickan) at www.killbrand.com until October 31st by using the exclusive AP code “alternativezack” at checkout.

Don’t forget to pick up Don’t Panic and buy tickets for “The Rock Show At The End of the World” at www.AllTimeLow.com.