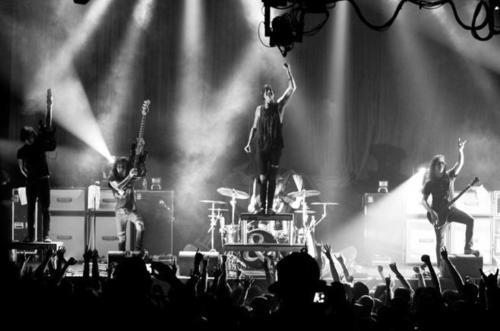 OF MICE & MEN has had their fair share of obstacles in recent weeks. Bassist/clean vocalist Shayley Bourget amicably left the band, putting the vocal dynamic of the group squarely on the shoulders of frontman Austin Carlile, then Carlile was briefly hospitalized due to heart complications (but as you’ll read below, he’s doing much better now).

Despite all of that, the band didn’t alter their studio schedule, recording a new album that should be out later this year. AP spoke to Carlile from the studio about the new album, the band’s lineup changes and more.

How are you feeling, Austin? You were just in the hospital a little over a week ago. Everything turn out okay? What happened?
Yeah, I’m doing better. The doctors have me on a bunch of medicine. I have a viral infection inside my heart, so they have me on a bunch of medicine to stop it from getting out of control, but I’m feeling alright. I’m alive, so I can’t really complain too much.

That’s great to hear. Another day alive is a good thing. So you guys are in the studio with Cameron Webb who’s done records with everyone from Godsmack and Motorhead to Silverstein and Sum 41. How is he? How is the experience of working with someone with so much longevity and knowledge of music and the industry?
It’s great working with Cameron. He walks around like he’s on fire. I’ll be in the vocal booth and I can’t think of something and he’ll come in there acting like he’s angry and go, “This part builds up and it does this and it does this and then…aw, nothing happens.” I remember when we were recording a guitar part, he picked up a table and was like, “It needs to sound like this” and he just slams the table down.

He’s just really eccentric and kind of a genius. It’s been really great to work with him [and have] his input on parts that might not be good enough or on how to make the big parts bigger. He’s great—I have nothing but positive things to say about him and the recording process.

Is there anything specific about the recording process or his input that is really helping shape the sound of this record? Where is his influence most prevalent?
On our new stuff, we want to go more rock, or I guess a nu-metal sound you could say. He’s really helping us hone in on that idea of making our music friendlier for different listeners instead of just staying in a box. We’re trying to break out of the whole normal music writing sessions and the normalcy of what people assume our music is and Cameron has really helped create that aspect of our sound that we’ve been searching for. It’s been a really great experience.

Where are you in the process exactly? I know it’s been a few weeks, so how is everything sounding?
We actually have everything laid down already. We’re working on the mixes and trying to get everything sounding as good as possible. I have one of the songs on my iPhone and we listen to it all the time—it’s really great; we really like where the sound is going and how the songs have turned out. We’re ready to drop them all and show the world a more polished and mature sound.

Back in February, Shayley Bourget (bass/clean vocals) left the band and now you’re the only vocalist left. Is there any added pressure? How did you being the only vocalist play into how the songs came out?
It definitely came on as a big pressure, but I’ve always worked better under pressure and with the history of the band since we first started, we’ve always been rushed. Most bands start out in the first couple years [where] no one knows them and then they get all the kinks worked out. We got started and were immediately in the limelight and everybody knew our every move. It’s been hard getting things adjusted to where they need to be, but I’m really comfortable with the fact of doing more vocals. I think as a listener they’ll be able to hear it, too.

The change we’ve had in bringing my voice into [singing cleans] at the same time of keeping all [the old aspects of screaming], we kind of worked around that more and we evolved some of our sounds to fit more with my voice. I think our listeners will be very happy with what we’ve done. It’ll also help us draw in new listeners in different areas of the musical scene and different places can appreciate what we’re working on.

Coming up on your third record, it’s definitely a good point to assess your sound and make changes where you see fit—no band wants to repeat themselves over and over, so it’s good that you’re all trying something new and taking musical risks to hopefully come out on the other side as better musicians.
I completely agree. We haven’t really had much of a break as a band. This year we had three months off—well, we had a month off and then two months of recording, but even a month off was kind of driving us crazy. It feels nice to be back on the studio and getting everything re-amped for 2012 and hopefully do a lot of big things.

Shayley’s departure was announced just back in February and you entered the studio in March, so did you guys bring in and use material he wrote? Are you singing melody lines and lyrics he brought to the new songs or was he already not involved in the writing process of this record prior to official departure?
Shayley was actually basically out of the band since November. Our headlining run he wasn’t a part of and I was doing all the vocals and for our As I Lay Dying run, we brought in our good friend Joel Piper [of Confide] and he played bass and sang for us. Everything that we have written for this record, Shaley hasn’t been a part of and we’re really excited about the direction the band is headed.

Something that has always been a big part of your identity as a band are the very personal lyrics you’ve written (“Second & Sebring” being written for your late mother). What are you trying to do lyrically this time? Are there any themes and personal experiences you’re exploring that are sticking out to you?
Kind of the same thing. I think all of the stuff we write I try to be passionate about and have what I’m writing about and what I’m singing out mean something to me. If you’re playing music and it doesn’t mean something to you, there’s kind of no point in doing it.

With the new stuff, I really touched on a lot of things that I haven’t before and reiterated on a couple things. We have a song that’s basically a “enjoy your life, have fun, you only get one” kind of song. Then we have a song that’s about the evil things in the world and overcoming bad things and bad times. I tried to keep it well-rounded to give the listener the same familiarity as with the old songs of them being so close to home and talking about things that are relevant. I just hope they can walk away from a song and feel something from it more than just a song. The whole perspective of, “Oh, these guys are going through the same things I am. This guy is experiencing the same things I do. I can relate to that.” That’s one thing I always want to keep.

You touched on this a little earlier, but I think after everything that’s happened the past few years since Of Mice & Men’s last release, everyone is wondering where the sound is going to go. You used the word “nu-metal” earlier, which I think gets a bad rap in today’s scene sometimes. Can you expound on that choice a little bit?
I think our newer stuff is a lot more structured. When I think of nu-metal, I think of Linkin Park, Limp Bizkit, Slipknot and even Chevelle—those types of bands. The songs are a lot more structured and they’re a lot deeper and the tunings are even lower. I kind of wanted to touch on that and have our songs to have more of a rock and roll feel. Just in your face, angsty, here-it-is rock and roll. And that’s what I think of when I think of nu-metal: structured, heavy music that has a point. It’s angry just like all the other music, but the bigger parts are bigger and the powerful parts are more powerful and the slow parts slower.

With shooting for this new sound, are there any parts or songs that you think are real curve balls that fans might not expect from you guys?
There’s a couple parts that are like that. We’ll have a part and it’s clearing up, so you think something is going to happen and it totally stops and does something completely different and then the part you thought was going to happen comes out of completely nowhere. We wanted to put a lot of parts in that keep the listener interested and glued to the song. Some of the songs are songs you’d listen to by yourself, but then some are songs you’d listen to while at a party or an event and have the same appreciation for them.

Do you guys have any release plans yet?
We’ll definitely be releasing some of the new material before Warped Tour because we’re playing Warped and we want to be able to have everybody sing the songs and have Warped Tour be the first platform where we play the new songs live. We would be playing them soon if we could, but we want to wait until a bigger platform like Warped when the songs will be really rounded and released. I’m excited that music will be coming out so close to Warped Tour.

Is there anything left you want people to know about the band and record?
I think I just want to say thank you. We have the best fans and family that I think any band could really ask for. They’re in for a treat with the new stuff and 2012 is going to be a big year. We couldn’t do it without our friends and our listeners and the support of all of our fans. It means the world to me and it’s cool that I get to do what I love for a living and have fun with it and have so many people be 100% behind it. alt