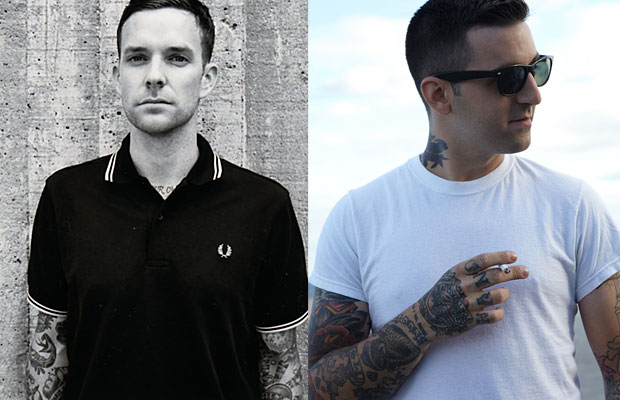 VINNIE CARUANA of I AM THE AVALANCHE and BAYSIDE’s ANTHONY RANERI took some time out of doing laundry and wet-vacuuming to chat with Jason Pettigrew about their impending tour with Saves The Day and Transit, inclement weather, their long-running bromance and achieving inner tranquility.

Were either of you affected by Hurricane Irene?
VINNIE CARUANA: The bottom floor of the house me and my friends live in flooded, and that’s the floor I live in. Not ravagingly [sic] flooded, the carpet was just wet as shit. There was nothing floating around. I moved my mattress out and put everything I had on top of my bed platform.
ANTHONY RANERI: Not at all. The infrastructure is a little different than it is on Long Island.

See, I was told that you were cleaning up things.
RANERI: Well, I’m doing laundry [Laughter.]
CARUANA: Me too, dude!

Look at you two! The old saying “brothers from different mothers” comes to mind.
CARUANA: Well, I think the word is “rockstar.” Doing your laundry is very rockstar. I did my laundry and had a bagel. I took a whole bagel to the head as soon as I woke up. [Raneri laughs.] Anyway, October 6 is the first show. I have an exclamation point beside the date on my calendar. I want to drive to the [Philadelphia club] Trocadero right now, and live there for a month [before the first show].
RANERI: Just camp out?
CARUANA: Yeah, what else am I gonna do?

You guys have had a bromance for a while now. You did a split single, what, five years ago? (IATA contributed “Drinking Song,” while Bayside covered Death Cab For Cutie’s “I Will Follow You Into The Dark” for a 2007 tour-only release. —record nerd ed.)
RANERI: We recorded that in Mikey’s [Ireland, IATA guitarist] ex-girlfriend’s bedroom. But we go further back than that. [To Caruana.] What was that, Warped Tour ’01?
CARUANA: Yeah. That’s when I first remembered meeting you. Danny Navetta from the Movielife introduced us.
RANERI: The Movielife were doing some shows on that tour, and Bayside were doing shows. [Vinnie and I] are very similar people. We grew up in the same scene; we grew up around the same people. It’s Long Island, New York—we all stick together.

It’s good that you’re out on tour together. It’s almost like you’re foxhole buddies in the trenches, considering how the industry standard these days is for bands to buy onto opening slots on tours.
RANERI: We reminisce a lot about how things used to be. The music scene was very different at the time we were coming up than it is now. We’re definitely two bands that hold on to those old standards.
CARUANA: That’s why we respect each other as musicians. There are friends that are friends, and then there are friends you are actually telling the truth when you say, “Wow! I love your record.”

And the friendship is strong enough to survive when a question like, “Dude, what the hell were you thinking when you did that?” comes up?
CARUANA: I don’t think we’ve ever had that conversation. Anthony?
RANERI: I don’t think I’ve ever disagreed with any decisions you’ve made in your career. I back the records; I back the move [to another label]. We did a lot of things for the first time together. [Bayside] were playing shows when Avalanche were just starting. Me and you first met when you were still in the Movielife and Bayside had just started. We did our first solo shows together, which turned into much bigger things for both of us. I remember when we were in Australia and [some promoters] asked me to come DJ at a party. I had never done that before, and you just stood beside me at the DJ booth, watching me as I was trying to figure it all out. [Laughter.]
CARUANA: We were in a fancy hotel room in Australia, and these people wanted Anthony to come across town and DJ this party—which ended up being massive. There were 15 of us in this hotel room, drinking beer and being silly, and Anthony’s like, “Only if they send two vans over to pick us up, and all my friends get to come in and have free drinks.” [Laughter.] He said to me, “Dude, just hang out, this is going to be really weird.”

You guys have the bromance down so well, your bands could go anywhere in the world together and it will still feel like home. That’s admirable.
RANERI: Home is where your friends are.
CARUANA: It’s going to be an easy tour for me. You’re driving in the van and you know that everyone’s waiting at the club to hang out all night.

I Am The Avalanche have been sidelined for a while as the band wrote songs, got their business in order and got jobs so they could pay their rents. They haven’t done an extensive tour for a while. Anthony, do you have any tips on getting Vinnie acclimatized to road life again?
RANERI: It’s funny: I can see how the perception could be like you said. People could consider this tour a reintroduction [to IATA]. Publicly, it is. But as a good friend of Vinnie’s, we talk almost on a daily basis. I know that they’ve been pushing for years to get this new record out. To say that they’ve “sidelined” anything is definitely the wrong word, because it’s been a priority for them all along.
CARUANA: We haven’t had much of a presence. If you’re standing in front of people, they’re wondering where you are.
RANERI: I wouldn’t offer advice to him. [IATA] know what to do. They know what’s going on. They worked on their band everyday, writing songs to get this album finished. This isn’t a place to get comfortable; you have to keep wondering what your next move is going to be, career-wise.

The interview continues on page two…