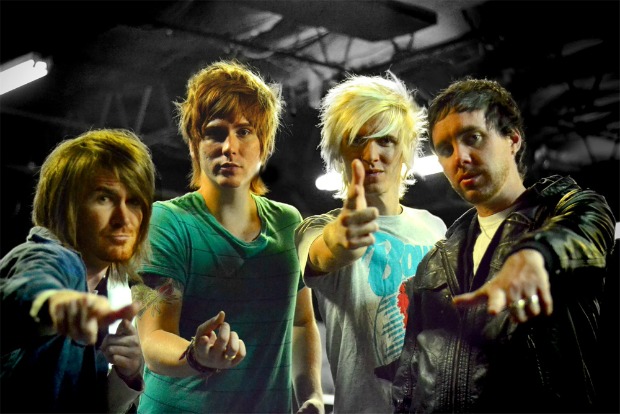 Forever The Sickest Kids are at a crossroads in their career. After losing two members and parting ways with their label, the band is pushing forward and releasing new music that is created 100 percent by themselves. Before the Canton, Ohio, stop of their tour with the Cab, Marianas Trench and Simple Plan, frontman Jonathan Cook, bassist Austin Bello and drummer Kyle Burns filled AP in on the future of their band—and why they couldn't be any happier.

How has the reaction been to the tour so far? You have Simple Plan and Marianas Trench, who don't tour here a lot. Besides the obvious pop-band angle, what does each band bring to the tour?
Austin Bello: To be honest, I hadn't heard of Marianas Trench before this tour. Now, I have a couple of their albums. I honestly really like them. They are kind of pop like the Cab. Simple Plan are the nicest dudes I've ever met. The whole tour gets along like a family, and that's kind of rare.

Kyle Burns: It's crazy. They have the biggest cult following in America, Simple Plan does. When we started playing shows, we saw a lot of new faces in the crowd, not people we would normally play to. It was a lot of Simple Plan's crowd that would sell out the venue before most people could buy tickets, because they have such a good following.

I heard your new song “Shut The Front Door (Too Young For This).” What was the inspiration behind the song? What in particular stands out to you about the musicianship in the song?
Bello: It's kind of a rebellious song. I think we were going through a time where we were growing up and seeing all of our friends that are our age. All of my friends almost have kids, they are all married, and they have 9 to 5 jobs. We are kind of reluctant to [think about] growing up right now. Kids forever.

What sort of direction do you want to go in with the next album? Is there anything different that you want to explore?
Burns: We already have a couple of songs in the works for the new music coming up. I listen to it all the time. It's like our old style from Underdog Alma Mater with what we've been through in the past four years. It's absolutely amazing. It's some of the best music that I've been fortunate enough to be a part of.

You guys are without a label now, correct?
Jonathan Cook: Purposely. We've had three labels make us offers to re-sign. We've run the game enough to know how to do things. I think right now, we are going to continue to put out music the way we have. “Shut The Front Door,” “Crossroads” and “Summer Song” were the first music videos that we have shot on our own. After that experience, there is no need to go have a father-figure above you telling you what to do anymore. You just find a new sense of freedom.

Burns: We love the label that we grew up with. Universal did such wonders for us and got us so much more exposure that we couldn't have got by ourselves. But now that we have a fan base and everything, we want to be able, like Jonathan said, take the knowledge that we've learned over the past four years in marketing and our creative responsibilities and use it [for] ourselves.

Cook: I will say that we were blessed with the way that everything worked out in the end. I know a lot of my other musician friends get into gnarly situations with their label, but Motown went through a hard time and let us go in a way where we are totally free. So we have no ties, no debt, no responsibilities, but we are just totally free as musicians. If we would have left in another way, it would have been gnarly and a bunch of legal jargon and we may need another label.

Burns: We definitely left on great terms. We literally still talk to the label on a weekly basis. We will be like, “Hey! We have this thing coming up. What do you think we should do?”

Do you guys have recording plans?
Bello: This is a really cool time for the four of us, because we are about to record, mix, produce and just do everything ourselves. This album is going to have our four opinions only in it. We're actually going to be recording it all and mixing it ourselves with our sounds. It's the most freeing feeling that we've ever had. We do what we want.

Burns: Over the past four years, that was one cool thing. The label would send these million dollar producers and what not. It was an awesome experience. All of us would be sitting over their shoulders and watching what they were doing. We would be like “How did you do that?” and “Why did you do that instead of this?” We just gathered all of this knowledge in the past four years.

Do you know where you guys want to record yet?
Bello: I'll tell you. Between Kyle, I, and Jonathan, we have home studios. They are pretty freakin' relaxed and pretty awesome. They are free—absolutely free. They are cool. We have everything set up that we need. We have every guitar that we need, every piano we need, we have couches, and we have video games.

Burns: After all the stuff was going on with the label, we released “Shut The Front Door” and it cost us zero dollars to release it. We recorded it all, wrote it all, produced it, mixed it and everything for free. It's such a blessing.

How has the absence of Kent [Garrison] and Marc [Stewart] affected the band, if at all? How do you think the band has changed without them in it? Will you guys continue as a four-piece?
Cook: Absolutely. It's a situation that when we signed, we were all in college anyway. It was inevitable that some of the guys would eventually want to go back to college. That's what happened. They left on great terms. And because the band got popular while we were still in college, we knew that some people would want to leave and go back to college. Fortunately, I was the only one who was able to graduate. So Kent and Marc told us that they wanted to go back to college and they gave us plenty of heads up. Kent texted me last night and Marc texted me last week. It was all on good terms.

Burns: Marc was getting married last summer and one of the things that he said when he was getting married was, “I'm going to take a step back from the band and actually hold my life to the fly.” That's one thing he wanted to do and go back to school sometime. Kent did the same thing as well. He wanted to be home with family, go to college. We were like, “That's cool. Absolutely.”

Bello: In a band sense, it is kind of a shock when you realized that you're down a third of your band. For us four, there were times we had to be like, “What do we do? Are we going to keep going?” All of us were 120 percent sure. This is what we love and this is our passion, so we had to do it.

Burns: It's crazy to think that we actually started off with six members in the band. We're just as strong as ever. We all had to pick up a lot of slack. From this point forward, we all know our responsibilities and what we need to do to keep Forever The Sickest Kids alive.

Do you think their absence will influence new material or will show at all in new music?
Bello: Maybe. If you're making music with other people, you have influences from all angles. So now, it's our four influences. As for song writing, the beginning kind of developed from this core anyway. I think it will be more of the same. alt