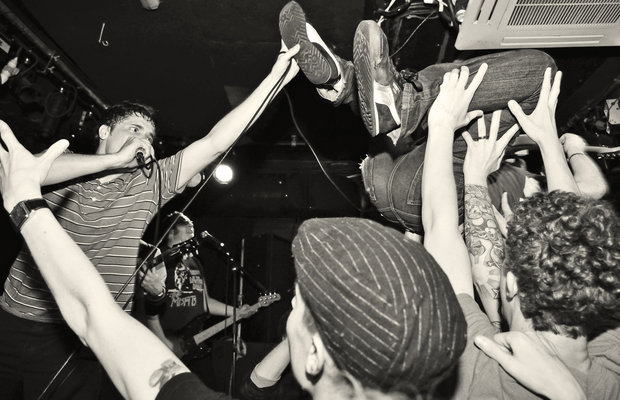 CLASSICS OF LOVE released their debut full-length earlier this week via Asian Man Records and AP chatted with frontman Jesse Michaels about the new album, the chances of an Operation Ivy reunion and more.

It seems like you haven’t been this aggressive vocally in nearly 20 years. Has your voice gotten its second wind?
If anything, my voice is… It’s just the style of music. The last couple of years—Common Rider, all that intervening stuff—I was writing a different type of music. But this record was punker and more demanding of a very energetic, adrenaline-based performance. So that’s what I did. In other words, it wasn’t like a difference in quality of my voice; that’s what the type of music called for.

Did you have to remember how to sing that way?
Not really. It’s pretty natural for me. I’ve listened to fairly aggressive punk all my life, even when I was doing mellower stuff I was still listening to Jerry’s Kids and stuff like that. I love that stuff, even when I’m not playing it. So it was fairly natural.

There’s a little bit more of a ska influence peeking out on these songs versus the Classics Of Love EP, even though the bulk of it is Dag Nasty-esque hardcore. Did you have to convince your bandmates to include those ska flourishes?
If anything, they kind of convinced me. [Laughs.] Mike Park told me we should do ska songs, and I was like, “Yeah, whatever.” Because he’s crazy about ska. But then I said “Why not?” We tried it and it sounded good. I was surprised that it worked, actually. Not everybody can play ska. Not everybody has the feel for it. We tried a song and it sounded good, so we just went with it.

When you have pretty good chemistry with the people you play with, it kind of has its own momentum. I fooled around with the arrangements a little bit, and there’s certain go-to things that I try to include in any song, no matter what the style of music—like dynamics, having a good hook—so it all fell into place pretty naturally. Although I will say we’re very selective about the songs we end up keeping. For every song we keep, we try probably three or four, and they don’t quite work.

Classics Of Love is the first time you’ve played music with people who are significantly younger than you. What did the age difference bring to the band dynamic for you?
Not that much. Truthfully, it barely occurred to me that they were younger. I have a kind of childlike… I’m kind of an ageless person in a certain way, or maybe I’m just immature. I tend to be able to relate to people who are younger than me as well as I can people who are my age. We have a similar sense of humor.

A lot of people view you as an elder statesman of punk. What do you think about that?
[Laughs.] I’m not really that involved [with the scene]. I kind of do it as a hobby. I don’t really feel that deeply affiliated with the punk scene; there’s things I love about punk music and ideas that I like, but there are things about it that drive me crazy. I’ve pretty much moved on in my life. I’m not doing laps in the pit anymore or drinking 40-ouncers in the alley, or any of that shit. So in many ways I’ve moved on, but on the other hand, I still love it creatively. This band has been a chance to have a little fun with it without it being life-consuming or becoming a controlling identity for me.

Do you think you needed that much downtime between records to get to that point? The last Common Rider record was 2002.
I’ve never been all that consistent about playing music. I do a lot of other stuff; I’m a painter, I’m a writer, I’ve been going back to school. I guess I was a bit sporadic with the music, and I don’t really know why that is.

Was it difficult to write a novel knowing that some people view you as the son of Leonard Michaels?
Not really. My father was a great writer, and obviously it helped me to have grown up around books. But he traveled in very academic circles; he was kind of a writer’s writer. I get along with people like that, but I’m a different type of person; I’m more of a normal guy. It’s a different world. Most people don’t really believe that talent is genetic, so it’s not like people who liked his stuff will be particularly interested in what I’m doing. I’m working with a different audience. I’m sure people will probably draw some connections, but I also write in a much different style.

You’re very much a non-fiction writer on the Classics Of Love record. Would you say that’s accurate?
It is in one sense. I’m writing non-fiction stuff. But on the other hand, I think the process is kind of similar. You kind of enter the same imaginative space, wehatever you’re writing. My father was a very poetic writer. He was very well known for his prose, for these carefully crafted sentences. That’s kind of what I did with lyrics, although it’s a completely different genre. In some ways, it’s similar. In other ways, it’s completely different.

The one song that sticks out to me is “Gun Show,” both musically and lyrically. Are there certain moments on the record you’re most lyrically proud of?
Well, “Gun Show” is probably one of the more poetic songs. It’s basically about being in a punk band; it’s kind of a romantic song. It’s an us-against-the-world song, inspired by a Stiff Little Fingers song. I was stoked about that one. I feel pretty happy about all the lyrics. We used one song for every three we got rid of, and we weeded it down to the good stuff.

Were the songs you threw out completely written from a lyrical standpoint?
Not so much. Some of them. I always write reams of lyrics for every song, because I free-associate a lot.

Do you find yourself picking those songs’ scraps for other songs?
Oh yeah, I definitely pick up the scraps. For me, there’s something about inventing something new which makes it more interesting. I’ll use the lines I remember from old songs, especially choruses. I don’t go back through the old piles of lyrics, though. It sort of has to come out of my imagination to have creative energy, if you will.

The name Classics Of Love came from a Common Rider song. Was there a specific relevance to that song that made you want to choose it as a band name?
Well, I don’t know exactly… I don’t remember exactly how it came up. Our drummer was the guy who wanted to use that. I was a little bit skeptical because it sounds a little bit too sweet. That song title actually came to me in a dream; I woke up from a dream and I had a song going through my head called “Classics Of Love” which is not the one that Common Rider recorded. But anyway. It’s just sort of a phrase that’s been batting around in my head for a long time and it ended up feeling right for this band for whatever reason.