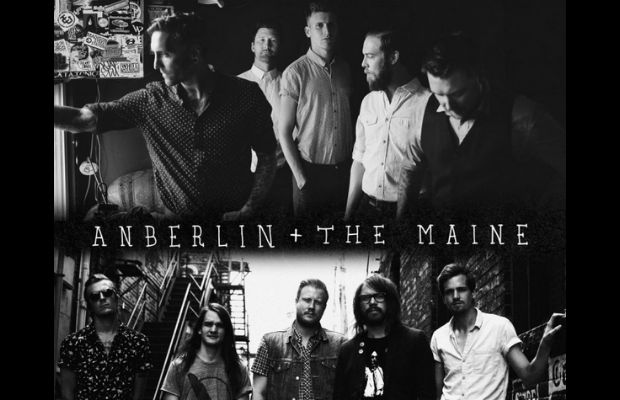 Anberlin and the Maine are co-headlining a North American tour with support from Lydia and From Indian Lakes. The tour has been stirring up a tremendous amount of excitement among fans since the day of its announcement. We caught up with the Maine and Anberlin frontmen John O’Callaghan and Stephen Christian about a week into the tour for a chat.

You’ve been out for about a week now. How have the shows been? How has the crowd been receiving it?
JOHN O’CALLAGHAN: Even with the shows where I thought ticket counts wouldn’t be as great, they were awesome. Like Stephen said, I don’t think people have really walked out. It’s been very, very surprising. That’s what it’s all about, playing for those new people. And I think that’s why the tour makes so much sense because people are coming with an open agenda and an open mind—they’re ready to hear new music. If they haven’t really given The Maine or Anberlin a fair shake in the past, I think this is the tour where they allow it to happen. The shows have been really incredible; there hasn’t been a disappointing one yet.

I could already tell from the announcement video this was going to be a fun tour for both bands.
O’CALLAGHAN: I think we’ve played about five or six shows; it’s an awesome tour so far. I can tell it’s gonna be a lot of fun for the rest of the month. We’re all getting to know each other really well, and everybody’s having a good time.
STEPHEN CHRISTIAN:I really like the other bands that we’re out with right now. From Indian Lakes are incredible to watch live, and I’ve never had a chance to meet Lydia, even though I know they’ve been around for a few years now, so it’s cool to get to know them, as well. We had a chance to hang out with the Maine in Australia, and we had so much fun, so it’s awesome to be able to keep continuing. On a lot of tours, you get to know people, and then you never see them again for years—especially when it’s overseas and so short. I was actually joking with some of the guys and saying, “What if we didn’t get along with the Maine? We’re signed up to hang out with them for, like, two to three months.” But it was awesome; Australia was incredible, and this is a really cool continuation.

Aside from it being a fun tour, The Maine and Anberlin sound like a very no-bullshit, music-centric lineup. How did you link up? John, were you an Anberlin fan before you came up?O’CALLAGHAN:Yeah, I absolutely was. We’re very fortunate to be on tour with Anberlin. And like Stephen said, we’re very fortunate to be out with Lydia and From Indian Lakes. For us, it’s kind of surreal to be out with Anberlin because of how big of fans we were before this tour started—and I’m not just blowing smoke. It’s cool for us because we’ve been working toward that. It sounds a little strange, but we’ve been working toward that music-first mentality for a while now, and it’s really great to be on tour with bands like these.
CHRISTIAN: The deciding factor for us was that Forever Halloween was such an incredible record. I liked it a lot; I was totally stoked on it. After listening to that, I was like, “Absolutely, it’s just too good.” I think that it clicked perfectly with what we’re doing now. It totally felt like if our fans came and listened to the Maine, they would instantly be like, “This is my new favorite band.” It just completely worked.

You make a good point about why Anberlin fans should come check out the Maine. So, John, why should the Maine fans come watch Anberlin?
O’CALLAGHAN: Firstly, because we’re fans of Anberlin, and it’s not like, “Just because we like them, you should like them.” But it’s the rock sensibility that they have. Anberlin sound so big when they play live—they’re just fucking huge. We’re trying to work toward something like that. There have only been a handful of bands we’ve been able to tour with who sound really large like that. Secondly, I feel like their songwriting is not too far off of what we’re going for or what we would hope to be. The songs are pop songs disguised as rock songs. They have a structure and a formation. Not saying it’s formulaic, necessarily, but they have very catchy choruses covered up by that rock sound. We can learn a lot from that, and I think our fans will appreciate it.
CHRISTIAN: I think we both have moved in the same direction. We both started out a lot more pop than what you would go see now. On our first record, [looked, sounded and felt] way different than now. I think that without that evolution, not only would our bands not be touring together, but I doubt Anberlin would even still be a band. Those nuances and moving toward a rock sound are what brought us together.

How do your bands play off of one another? Is there any competition?
CHRISTIAN: When you’re faced with another good frontman, it only elevates your game; you’re only more excited to get out there and play. To watch the Maine, night after night, it’s just kind of like, “Man, I wanna be back out there; I wanna get back onstage, right now.” It’s just exciting, and it makes for a fun show. I get this feeling from the Maine where, honestly, my first thought when I see them play is, “I need to go write some more music.” They’re just inspiring like that. I think that’s how we feed off of each other. Every time I watch the show, it makes me want to get back out there.
O’CALLAGHAN: I feel the same way. If everybody’s playing a similar set and there’s a certain part where you put the mic out and the crowd’s singing, you get goose bumps. Anberlin have been doing it for 11 years; we’ve been doing it for seven years, so the fact that people are still here and looking forward to it all is mind-blowing in itself. It’s a very humbling experience every time we’re able to go back out on tour—especially now, with these bands.

The Maine have Forever Halloween out, and Anberlin have Devotion coming out. So will fans mostly be hearing new songs live?
O’CALLAGHAN: No, I wouldn’t say it’s a lopsided set at all. Anberlin are playing a balanced set, and we are as well. As a fan, you don’t wanna see a new-material-heavy set from any artist. It’s important that we satisfy our needs by playing just enough new material so that we’re keeping it fresh and exciting for ourselves, but at the same time, making a point to balance it out. We’re playing what we need to; to get our rocks off and still be appealing to the people coming to the show.
CHRISTIAN: If I went to a show, I wouldn’t want to just hear new songs. We definitely try and play from front to back—first album to the most recent simply because people didn’t discover your band on the most recent record, most likely. I’m sure a few people discovered you, but the majority of fans at the show have been fans of your band for years. They want to hear it all. They want to hear their favorite record and the new stuff. So, like John said, we put a few songs in there for us, but it’s a pretty healthy balance.

Have The Maine ever toured Maine? And, have Anberlin ever toured Berlin?
O’CALLAGHAN: We have been to Maine a few times. The tour that we did just before this one had our first proper show in Portland Maine. We toured there, like, seven years ago, when we first started but hadn’t been back since.
CHRISTIAN: Yeah, we’ve been to Berlin twice now, and everything inside of me just wanted to say, “Ich bin ein AnBerliner,” like Kennedy did, but I held back on that cheesiness. ALT