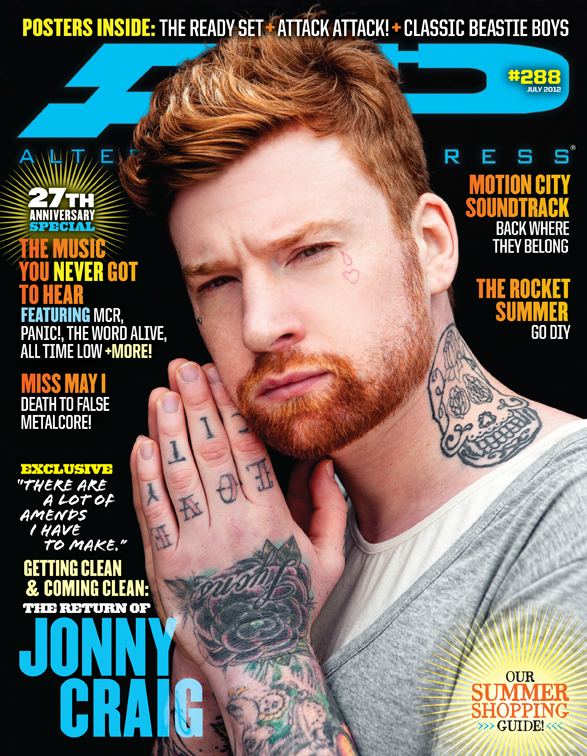 After a long battle with drug use and a slew of other mishaps over the years, AP 288 cover star Jonny Craig went to rehab earlier this year and is now back on stage and re-entering the real world. We had the chance to catch up with Jonny to talk about how he's feeling about his performances, his continued sobriety, moving out on his own and making new music again. Be sure to get the full backstory by picking up AP 288 here.

So you’ve hit the stage a couple of times now and the turnouts have been great with a lot of positive support. How have you felt about your performances?

At first it was a little rough. I just didn’t know how to take it and then that Chain Reaction show—it was like the third one in—was just really good to see a lot of people’s reaction to me being sober and saying that I’m sober. It felt good. From there, I had more shows after that and they were good. The audience is still there and I still love doing it, so it’s not really much of a change for me. It just took a little bit to get into it being sober and stuff.

How do you feel about your voice now? Do you feel you're singing better now?

It was a little hard to tell. At the first two shows, my voice sounded fine. Then it kind of went out a little bit, but that’s because I also haven’t practiced and haven’t been singing in a while, so I didn’t really focus on it too hard—on changing or not being changed yet. I haven’t been able to really gauge that, you could say. I just went with it and at these last two shows I could tell my voice was getting a little stronger, so I think the problem was just that I hadn’t sang in a while and that’s why I felt a little off about it.

How has interacting with fans after the shows been?

They’re all super happy for me and want me to sign the magazine cover and told me it was a great read. They’re stoked and that makes me stoked. I’m definitely feeling it. A lot of kids have really gone out of their way to say [they’re happy for me].

I saw you’ve moved to L.A. officially. What’s the situation there?

Yeah, I was out here for rehab and then the sober living was in Santa Monica, so I’ve pretty much been in the LA area for almost three months now. I’m actually getting a place this week; I’ll be moving into a two bedroom down in Hollywood. Right now I’m just staying with my DJ and his parents. During the last week of sober living we came over here every day of the week and was kind of feeling it out to see if it would be alright for me to stay here and how I’d feel about it. It was fine and I’ve been here now for almost three weeks and we’re out of here this week. It’s been good and hopefully my new apartment will prove to be a good idea.

You are out into the real world now and performing and doing day-to-day things again, so how are you keeping yourself headed in the right direction? What steps are you taking to readjust and stay on this path?

It’s tough a little bit. I came out and I was super positive about it and I was like, “I got this.” Two weeks passed and it was just sitting around typing and waiting to play shows. It wasn’t as bad as I thought it would be. I don’t sit here and just think about getting high all the time every day. I have things that I do daily that keep my mind off that. Where I’m staying right now I have a pool and I just come outside and listen to music and go swimming and call someone up and hang out with them.

It’s a lot different for me now adjusting and doing stuff in life when I’m not high. Yeah, of course I’d probably go swimming high and hang out with people, but I wouldn’t make an honest effort in making those plans happen.

That’s awesome you’re still so focused on a better future and finding yourself.

Yeah, and obviously I’m struggling. I still have meetings and stuff. I don’t go to as many meetings as when I was in the sober living and rehab, but I definitely when I feel that urge or struggle, I definitely just go. Even if I’m not listening [to the meeting], I feel safe there. I don’t have to worry about someone being like, “Oh yeah, I’m feeling the same way you are. Let’s go get high.”

(cont. on next page)