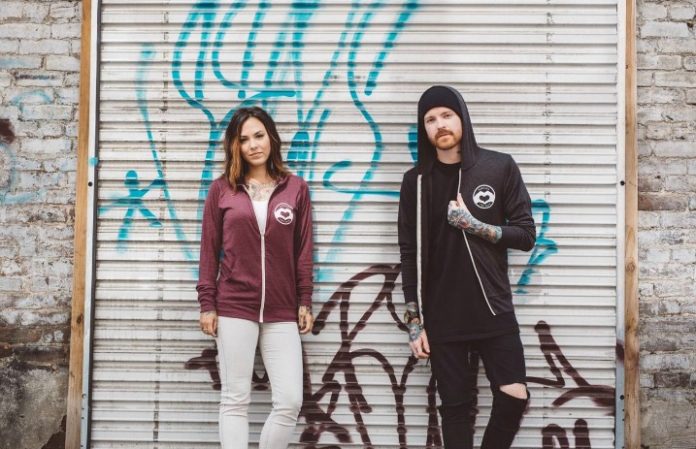 Nearly a decade ago, Memphis May Fire frontman Matty Mullins and his wife, Brittany, founded the faith-centered mentorship program Beneath the Skin. Following a conversation with a fan struggling with depression and anxiety, the couple’s then-unrealized vision came into focus and Beneath the Skin was born. Knowing that the emotional turmoil within the music scene was becoming too pervasive to ignore, Matty and Brittany created a platform for young adults to connect and heal in the most authentic way possible. Before the band hit the road for their North American tour with Killswitch Engage, we caught up with Matty about self-love, community and Memphis May Fire’s progress on one of AP’s most anticipated albums of 2016.

What is Beneath the Skin all about?

MATTY MULLINS: My wife started it for the kids in the music scene. I think there’s a lot of detachment from real life, and she wanted to set up something where these kids can have peer-to-peer mentoring to get them away from their phones, out of their bedrooms and face to face with someone who can really listen to what they’re struggling with and maybe offer whatever advice they might have for whatever season of life that they’re in. The overall idea is to decrease self-harm, depression and anxiety.

Brittany said that she was inspired by a fan that she spoke to at a Memphis May Fire show, what was that interaction like?

This girl came up to me and confided in me and told me she was dealing with drug abuse and self-harm and came from a really bad family life. Right then I just knew that something had to change. I had been praying about it for the last seven years, and then I got this vision for Beneath the Skin and we’ve finally been able to make it come to fruition.

How does your faith play a role in the organization?

It’s not a religious organization—we do value healthy relationships, self-love, hope and a Christ-centered faith. On the application we mention that this is not only an emotional journey but a spiritual journey as well, so if they feel prepared to support their mentee in such a way, then they can move forward and if not, we have a position called the Connection Advisor which gives the opportunity to still be a part of the organization without that piece.

What would you say makes a capable mentor?

It’s young adults who have struggled in the past with anxiety, depression, suicidal thoughts and self-harm and have actually overcome it. Now, they want to see others overcome those same struggles, so it allows them to support, love, be understanding and lend an ear to another young adult. The mentees can be of any age but mentors need to be 18 or older. It’s really for anybody who is passionate about seeing people grow and become their better self.

What do you think it is about the relationships we cultivate that affect our emotional wellbeing?

For me, anxiety and depression hit me out of nowhere and I didn’t understand what it was or where it was coming from, and that was the scariest part. When I started to interact with other people that had struggled with those things, whether they had fully overcome it or not, I found so much peace in knowing I wasn’t alone in it. When we have those struggles, especially mentally, we can start to feel like we’re going crazy or we’re losing our minds and there’s no turning back. I also think that when people have followers on social media, they feel like they have community and when they have likes they feel like they have acceptance and that’s not at all the truth. Human interaction, one-on-one interaction and really involving yourself in someone’s life and vice versa is the only way for us to really heal and move passed things.

Do you think that all social media perpetuates an insatiable need for validation?

It depends on how you use it and how you let it affect you. I think for the music industry, social media is very valuable in certain aspects. I think that what you are sharing on your social networks and the validity that you’re getting from it plays a big role. If you’re going on social media just to complain and let other people complain back to you, you can feel some kind of friendship there but it’s so false. If used correctly, social media can be good in some aspects, but I do think that it’s a definite downside to our generation and the struggles that we’re having.  If you’re looking for your YouTube comments to give you validation or security and you get one or two really hurtful, really hateful comments, it can shatter your world if that’s where you’re looking for your acceptance.

What do you think it is about artists and creative people especially that makes them predisposed to hurt?

For me, and for a lot of my friends who are artists, I think that we feel so deeply and that’s what makes a great songwriter or poet or painter, you can take emotions and translate them into music, or into art, and other people that feel those emotions connect to that, and that’s what makes art so beautiful. As artists, we’re given those gifts to use them outwardly and when we turn all of that passion and emotion inwardly, it can be a train wreck. Basically, taking these emotions and not doing anything with them is when they become really dangerous, and I think that’s why artists are prone to depression, anxiety and so many big feelings and emotions—at least that’s what I feel like I’ve learned in my own life.

What can you tell me about the new album?

There’s multiple topics that are discussed and I write from my perspective throughout the entire record, but I write about things I observe as well, situations and things people go through that they need a song to sing about. Some of the songs are about my own faith and the fight for what I believe is right. One thing that really influenced me throughout this record is something I’ve learned over the last couple years, that it’s ok to not be ok. I think that’s something so valuable to learn because as human beings, as soon as we feel any hurt or any sort of pain, our instinct is to run from it, but there’s so much to learn and so much growth to be had from just sitting in your pain and letting it teach you something, while also working it out and solving it from the roots. The overall theme is that every season of our life teaches us something different about ourselves and to rejoice, even in seasons of pain.

What would you say to someone who’s reading this interview and struggling emotionally?

I’m really thankful that my wife is doing Beneath the Skin. I think that it offers a lot of different people the ability to get one on one with someone, and to have a real human interaction, but whether or not you get involved with Beneath the Skin, I recommend that you get involved with a good community of people. We’re all a product of our environment and the people that you surround yourselves with affect you a lot more than you realize. So be careful about how you choose your friends, and wake up in the morning choosing positivity. Sometimes we get so ingrained with negative thinking that it just becomes a big part of who we are and negative thinking produces negativity in life and our overall outlook of it. Perception is everything, for better or worse it becomes our reality. I think that retraining your brain to perceive things differently is possible, it’s hard but it’s real and it is possible. If you can start to think in the way that you want to live, then it will slowly become the way that you live.