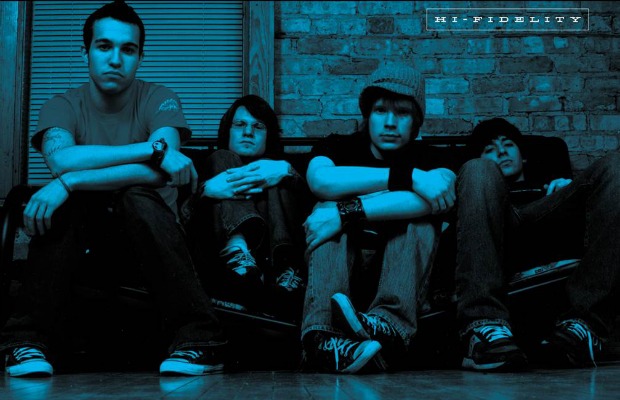 Ryan Bakerink has shot numerous bands when they were on the cusp of breaking out including Paramore and Thursday. But none of his images are as iconic as his picture of Fall Out Boy for their seminal album Take This To Your Grave. Which is kind of funny when you realize that the image used was never intended to be the cover image. The Chicago-based photographer talks about working with Fall Out Boy, coming up in the Chicago scene and what the cover of Take This To Your Grave means to him 10 years later.

How did you start working with Fall Out Boy?
I had a pretty good relationship with a number of the bands around Chicago at that time, especially the bands that were on Victory Records. The owner of Fueled By Ramen called the PR person at Victory. She knew me, I had a great relationship with her, so she recommended me to Fueled By Ramen. Fueled By Ramen called me up, and we talked about the idea and this band called Fall Out Boy. I had heard of them around town, but I hadn’t actually heard them. I was like, “Yeah, this band sounds familiar; cool, lets do this.”

I called Pete up, and I remember being immediately impressed with him, not only with how focused he was, but the aesthetic vision he had beyond the music itself. He was willing to collaborate, he had the ideas and he wanted to work with me. Pete and I went over ideas on the phone prior to me showing up at their place. He was bouncing back and forth between wanting a picture of the band on the cover and this idea of staging a bedroom scene for the cover. After he and I talked about it for a while, we eventually decided to go with the bedroom scene that he had thought of—which I thought was a great idea.

I showed up at their apartment around 5 p.m. to meet up with the guys and start getting to work. Everyone was extremely friendly and extremely into it. But because it was clear that Pete had this vision for what the cover should be, the rest of the band kind of let us run with it. So he and I really worked to set up this bedroom scene, which we literally had to create with things from around the apartment. We stripped the largest bedroom—I think it was Pete’s bedroom—and just went around the apartment and found things from everybody else’s bedrooms and created this set. In hindsight, I kind of feel like the rest of the band just let Pete do all of the heavy lifting. It was exhausting. We were carrying beds and dresses and all these things into the other room, and we were just soaked in sweat.

Everyone wanted to contribute something to the image so everybody had their own say of what sort of toys were in the image or what sort of posters. I remember having a lengthy conversation with Patrick [Stump] about Elvis Costello, and how much he and I both loved him. I noticed that Patrick had Elvis Costello’s Armed Forces vinyl sitting out. I grabbed that and strategically placed that in the image, thinking it was going to be my contribution but playing it off of [as] Patrick’s.

So we build the set with the dresser by [the bed] and all of these toys and posters in it. One of the ideas was to have the sheet pulled back, just as if somebody got out of bed and left a letter to someone. Maybe their partner was in the bed, and somebody just got up and left. We hadn’t decided on the album title yet. So we did one with a letter, in a sealed envelope that said “take this to your grave” on it. And the other one said the title of the album’s other possible title, which was “to my favorite liar.” Then, Pete thought it would be a cool idea to actually have a person laying on the bed so we had an impromptu model; I think it was Pete’s girlfriend at the time. So we had her lie on the bed. I really loved that shot. I showed the Polaroid to Pete and he was like, “That’s the one. That’s the cover. That’s awesome.” I’m pretty sure Pete kept that Polaroid because he loved it so much. We showed it to the band and they loved it.

So we wrapped that up, and it was around 2 a.m. so we were all exhausted. But I realized that we didn’t have any shots of the band, and I knew they mentioned that they wanted solo shots and portrait shots for the album layout. So I shot each individual member around the apartment. It was getting later and later, and we needed some band shots. The only real option was this brick wall and this couch that they had—which was, to me, awesome because it was breaking in the middle. It was a broken futon, totally caved in. I’m like, “Well, this is really the only shot because this futon is perfect.” So I sat the band there and we did a handful of shots. We didn’t have a lot of time because it was late, in the early morning so there was no daylight. We threw up some studio lights and did some quick shots, more so just trying to pose them in an interesting way. I did those shots kind of on a whim, and that was that so I went home.

A few weeks later, I got a call from someone at the label saying, “We can’t use the cover shot because there are too many things in the image that are copyrighted; we can’t afford to get the rights to use them.” We were all pretty bummed out, and I should’ve known better. I figured they were just going to use something else, maybe they had to find another photographer at the last minute and come up with another idea. But then the album release party came up, about a month or two later, and it was at the Metro, here in Chicago. I saw Joe [Trohman], and he ran up to me with the album in his hand. He was like “Hey, Ryan this is great; look at the cover!” I took a look at it and thought, “Oh, cool, they used that image.” I was sort of in shock because I didn’t think they were going to use any of my images. But it was interesting how they ended up using the last image we took that night, and I didn’t even know if it was supposed to be used at all. I wound up really liking it,. I think it worked out in the story of Fall Out Boy. >>>