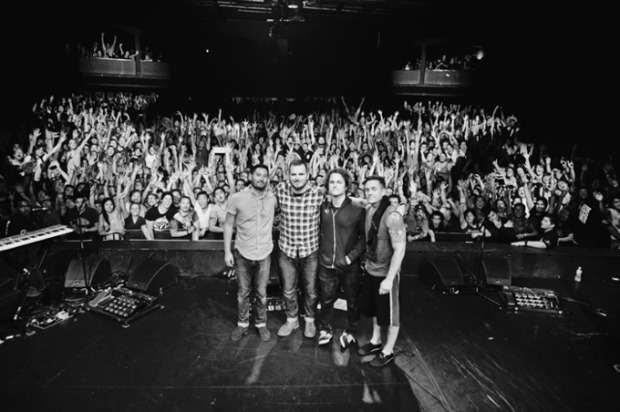 After a spectacular 14-year career, THRICE decided to take an indefinite hiatus earlier this year. The band have made a point of saying their adjournment is just that, implying that the four members will likely get together at some point in the future to continue making music. But as of right now, the band’s slate is wiped clean. We took this opportunity to catch up with guitarist TEPPEI TERANISHI as he wandered through aisles in a Seattle-area Home Depot, chatting about everything from his band’s new live release, Anthology, to what he has in common with Ron Swanson. (Hint: It’s not the bushy mustache.)

It’s been just under six months since Thrice were put to rest for the time being. Given the passage of time that’s taken place, how do you feel about how you guys wound things down?
I thought the tour was awesome. I think it was a really fun way to close out the chapter. The bands [Animals As Leaders and O’Brother] were great and the last however many shows we did at the end were really fun. I honestly don’t think I could ask for a better way to close up that chapter.

Yeah, at the very end it seemed like you were just adding a new show every single day in California. Obviously, there has to be part of you that expected that would happen, but did you think it would be that ridiculous?
No, definitely not. We kind of had a back-up plan. We were like, “Well, if these shows sell out in x amount of time, then maybe we could add another show or something here,” but we didn’t expect to have to keep adding more and more.

The fact of the matter is, you probably could have kept on going. So what made you stop when you did?
You can’t draw it out too long, you know what I mean? I think we kind of hit the limit there and we were like, “I think this is enough. We’ve got to cut it off at some point.”

Yeah. We recorded a handful of shows during the course of that tour, and I think we ended up pulling from maybe two of them. Most of it is from one show—to be honest, I can’t remember exactly which show—but there were just a couple songs, maybe two or three, that we pulled from a different show.

There’s nothing in the liner notes saying where the recordings came from, so I was wondering what the original place was.
I have the worst memory. I know some of the ones we recorded were from Chicago at the Metro, Orlando at the House Of Blues and then I think New York, but I could be totally wrong on all of that.

So if you were at that show and you were the guy yelling, “Deadboooooolt!” for an hour-and-a-half straight, you might hear yourself then?
[Laughs.] Yeah, exactly.

I have to wonder as well, when you played that last show, was there any sort of palpable relief within the band when you finally played “Deadbolt” for what could be the last time, that way no one had to yell it anymore?
No, not necessarily that. It’s a weird kind of thrill feeling. It’s kind of hard to describe, but when you’ve done anything for as long as we have, to think this is the last time you’re going to do it for who knows how long, It’s a really weird thing—especially when it’s a super-bittersweet thing. We all loved doing that still. It’s not like there was bad blood in the band or anything. We just kind of felt it was time to take a break from it.

We recently conducted interviews with Tim and Spencer from Underoath, and they both gave the same perspective, saying, “We could have been the band that just did a festival or two a year,” and coasted on their back catalog, but they wouldn’t have had the time to dedicate to moving forward creatively and artistically as a band. So instead of doing that and taking those pay days, they decided to end it. It seems like Thrice were in the same situation where you could have very easily just said, “Okay, this is a tour just like any other tour,” and then just come out of semi-retirement every three or six months and play a show here or there. Was there a discussion about whether you should make a clean break or not?
Yeah. I guess in a way, we felt like we owed it to people to not half-ass it. I think we dedicated so much of ourselves and so much time and effort and everything into the band for so long, so to let it coast out felt a little weird. We were pretty deliberate in calling it a hiatus because of the fact that we don’t intend to not ever come back to it. I think, if life allows, we’d love to keep doing it at some point. Whether it’d be like record another record or do a tour, whatever, but definitely for the time being it’s put to rest.

You moved as well, right? You’re no longer down in California?
Yeah, up north. Just up the coast in Washington.

Dustin Kensrue also headed up that way, too, for Mars Hill.
Yeah, he just did actually.

So you guys are kind of half in one spot and half in another, as Riley and Eddie Breckenridge are still in California. If you had to look at the situation as it stands right now, obviously every fan wants to know: How do you see the next couple years playing out as Thrice? Do you see yourself getting together in, say, 2014? Is it silly to even put a timeline on it?
There’s definitely no timeline. We haven’t even discussed a timeline. I don’t think anybody knows at this point. It’s literally us taking a break from the hectic life of being in a band, which is full of touring and being away from family and stuff like that. I’ve got three kids and Dustin does, too. Now that I’m home, I can’t imagine still having that commitment. It just gets harder and harder every time you leave, especially as your kids get older.

How have you filled the void Thrice provided over the past few months? What has been consuming your day besides kids?
A couple years ago, I picked up doing some leather crafting on the road, and maybe about a little over a year ago started selling my stuff online, just as a total side thing for fun, but that’s actually been going pretty good. So as soon as I got off the road, I decided to put a little more time and effort into it.

What’s the process like for doing something like that? How methodical is it, or do you just kind of make whatever comes to mind?
It’s sort of methodical. I definitely need something to make ends meet while the band isn’t making any money, obviously, so I’m kind of hoping this can be at least one of the avenues where I can make that up. I guess I’m basically wearing all the hats at the same time, because it’s just me. I’m designing the products. I’m actually handcrafting all the products and then just dealing with the day-to-day kind of stuff, just dealing with customers, shops and whatever.

Was that something you knew you were going to step back into as the band were ending the tour? Had you already mapped that out, or was that one of those things where you woke up the next morning and said, “Well, I guess I’ll do this.”
No, I’ve been thinking about it. Obviously, for however long we’ve known that we were going to wind it down, it’s been in the back of my mind. I’ve been like, “I gotta figure something out.” I still don’t have a solid plan, to be honest. I’m just kind of winging it and taking it day by day. This has been keeping me busy and hopefully will end up paying off.