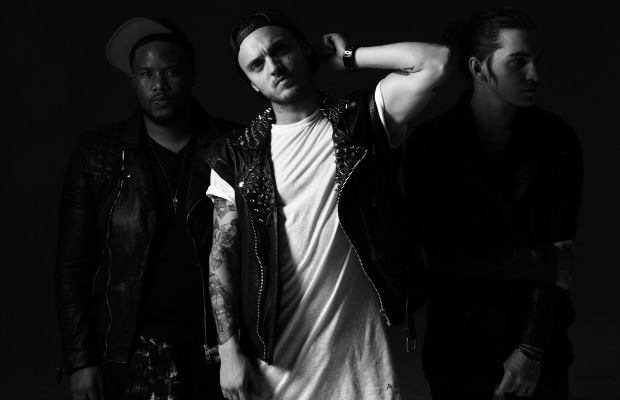 The Cab finished 2012 riding high. The Las Vegas pop-rock act’s independently released second full-length Symphony Soldier received raves from fans and critics alike (including AP’s four-star review); and the band were even granted the opportunity to support obvious inspirations (and collaborators) Maroon 5 on a world tour. With an announced signing to Republic, the Cab seemed primed to make the jump to radio stardom. Instead, fans hungry for more music were met with nearly two years of silence.

That silence ended April 29 with the surprise release of a new EP, Lock Me Up. We caught up with vocalist Alex DeLeon to find out where the Cab have been, where they’re going and the secret to surviving on the long, bumpy road from then to now.

First of all, congrats on the release of Lock Me Up. It feels like it's been a long time coming.
ALEX DELEON: Symphony Soldier , [which] we released independently, was really good for us. It got more radio success [than Whisper War]. I think we sold more albums. Pretty much everything saw more success than Whisper War, which we put out on Fueled By Ramen, so that was a pleasant surprise. But we also realized that, if you want to be the biggest band in the world, you need a major label.

Just because I write 10 songs doesn't mean I'm going to release 10 songs. It takes time. I'm a perfectionist, so I want everything to be great—or as close to great as I think is possible. So for us, we write a hundred songs, and we'll pick the 10 best, the 10 ones that we think are great.

How many songs did you end up writing during this cycle?
I would say at least fragments [of] a hundred, maybe 120? I write songs for other artists, as well. It's not like every song doesn't see the light of day. A lot of songs are great, but they just don't work for the Cab. Maybe it's not the vibe of the record. You write a hundred songs, and then you start to be like, “Okay, this EP or this album's going to lean a little darker. It's going to be a lot of minor stuff, it's going to be very R&B groove-based.” But you wrote really good songs that were upbeat and major and funky, and you're like, “Oh, these are great.” That's your opportunity as a songwriter to give those to other artists, to use them in other ways.

You released Lock Me Up on “Cab Day,” April 29, which is something that fans created initially to celebrate the anniversary of Whisper War's release. Was it always the plan to release something on “Cab Day,” or did the stars just happen to align?
It was a little bit of both. Our fans came together on their own and reached out and found each other—there are people in something like a hundred countries, it's crazy—[to make] this holiday for us, not even just for us, but for themselves, to meet other Cab fans and be part of this family-like atmosphere. Every year we try and think of something cool to do. A few years back we played Whisper War in its entirety, which we'd never done. There were four or five songs on the album that I didn't even remember the words to that we'd never learned how to play, so we were playing them for the first time. Sometimes we'll do group chats, or I'll do fan meet-ups in whatever city I'm in. We just try to do something special.

This year, as the EP and the songs started getting close to completion, it was like,”Wait, Cab Day is coming up; maybe we'll release a song.” It started out as us wanting to release maybe a song, or maybe announce the album title or something like that. And then, after talking with ourselves and our management and label, it was like, “Okay, if we really hurry, we might be able to release some new music.” So lucky for us, and lucky for the fans, we got to release five songs, which is a good chunk of the new album. It's not the whole thing. We've put a few of our favorites on the EP, but there are a lot more of our favorites on the album.

Is there a timeframe as to when that album is coming?
Definitely this year. I would say in the next few months.

All five of the Lock Me Up tracks will be on the album?
Yes, but there also will be a ton more. Hopefully seven or eight more songs.

Let's talk a little bit about those five songs. There's clearly been a progression throughout your career. Lock Me Up seems to pick up where Symphony Soldier left off and push even further away from the rock world toward more of a pop sound. “Moon” reminds me of La Roux's “Bulletproof.” “Stand Up” has that Maroon 5 groove. “Lock Me Up” would sound perfect on the radio next to Justin Timberlake, but it could also slot in next to a Black Keys track. Is that the sweet spot you're aiming for?
I've gone through so many phases. I've always loved Michael Jackson, Timberlake, Stevie Wonder. But then I went through a phase where it was Blink-182, Thrice, Thursday, Coheed And Cambria—total alternative rock, scene bands. And then, the next second, I'm only listening to hip-hop.

When we got signed, I think were were almost–not forced, but we were signed to Crush Management, [who manage] Fall Out Boy and Panic! At The Disco, so in a way, we didn't really know what to do. We liked so many different genres of music. This pop-punk kind of album came out. Semi-pop-punk I guess, with some of the guitar tones and all of that. But my voice was never pop-punk; I never considered myself a pop-punk singer. That, to me, was never the plan. I never considered us a pop-punk band. To me, we were always a pop band. We had tons of guitar and heavy rock influences, but we were pop. We had R&B influences.

Symphony Soldier came along, and we worked with John Feldmann, who brought more of a rock, live instrument side, but the songs started leaning a little more pop. I think the guitar riffs on this EP, or on this album, are heavier than all of the guitar riffs from the first two albums. Like, you made the Black Keys reference. “Lock Me Up,” that riff in the post-chorus is Black Keys-influenced. >>>