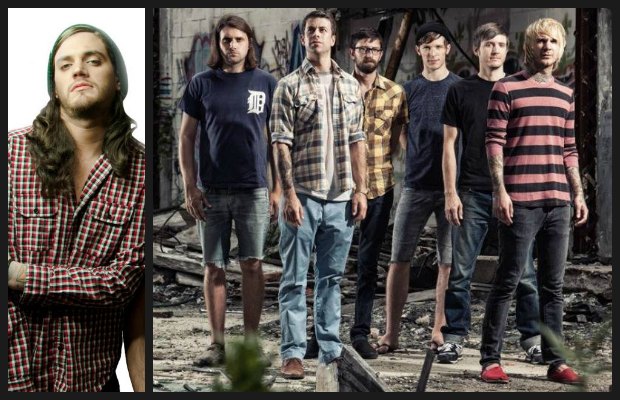 When news broke in November about Chiodos guitarist Jason Hale departing the band only a few months after their reunion with frontman Craig Owens and drummer Derrick Frost, it actually wasn’t that surprising. After all, in the band’s cover story in AP 290, Hale was quoted as saying, “I honestly think [continuing on] is totally doable without me… I don’t think I’ll ever be touring full-time again.” Cue Thomas Erak: The former frontman of the Fall Of Troy (and current leader of Just Like Vinyl) is a guitar virtuoso to say the least, and was approached in October to fill in for Hale for the remainder of Chiodos’ live commitments in 2012, including their headlining set at this weekend’s A Very GK! Holiday Festival in the Chicago area. But does that mean he’s an official member of the band? As we came to find out, even Erak doesn’t have a solid answer for that question.

I saw you took a nasty spill roller skating the other day.

My sister had her 30th birthday party, so she decided to throw the same party she did for her 10th birthday. I was just goin’ super-hard in the paint and couldn’t stop in the paint. I was probably goin’ about a hundred miles an hour. [Laughs.] My face stopped me.

Is there security camera footage and will we see it on Tosh.0 next season?

I hope so! Good question. Nah, it was in Everett [Washington], not Seattle. They don’t have technology like that there yet. There’s probably a black box or something just in case the place blows up.

Okay, let’s talk about Chiodos, who you are playing guitar for right now.

Who? I’ve never heard of that band ever. [Laughs.]

Are you an official member of Chiodos?

I’m… I’m… I’m playing guitar with some guys from Michigan.

Caginess, but kinkiness is fine, too.

Because, like, there’s a lot of talent flying around in this situation. What you have to understand is when there’s so much talent flying around, you can’t be thinking about making decisions. You just kinda gotta let it happen. I can’t confirm or deny anything. [Laughs.]

You can confirm that you’ve at least been playing in Chiodos in a live role, filling in for Jason Hale.

Yeah, Jason is a sick guitar player and those are big shoes to fill. [To Matt Goddard.] Oh my god, Matt, will you shut up? [To AP.] Hold on, we just had a van fart. Who did that? Jared, did you do that? Goddamnit! Sorry, that was like a barf fart right there.

You hinted on your Twitter account back in October that there was exciting news coming. How long had you been keeping this a secret from people?

Okay… Then how long has this been kept a secret from you?

I don’t know, it’s still a secret. It’s still being kept a secret from me. I’m just trying to find out the truth.

It is a very Fox Mulder answer! [Laughs.]

In this scenario, which member of Chiodos is Dana Scully?

Is it safe to say you are a member of Chiodos? Would the other guys in the band say that?

There’s no real talk of that right now. It just is what it is. I’m being honest for once; I’m not joking. It’s not being talked about yet. I’ve known these guys for almost 10 years, and they’re really good guys. They’re my friends and they make music I like, and I like playing music with them. Wherever that ends up going is where it’s gonna go. I would love to tell you yes or tell you no, but there is no yes or no at this point. It’ll figure itself out, man.

When were you first approached by the band?

Nobody in the band called me; their manager did.

Were you surprised to hear from them?