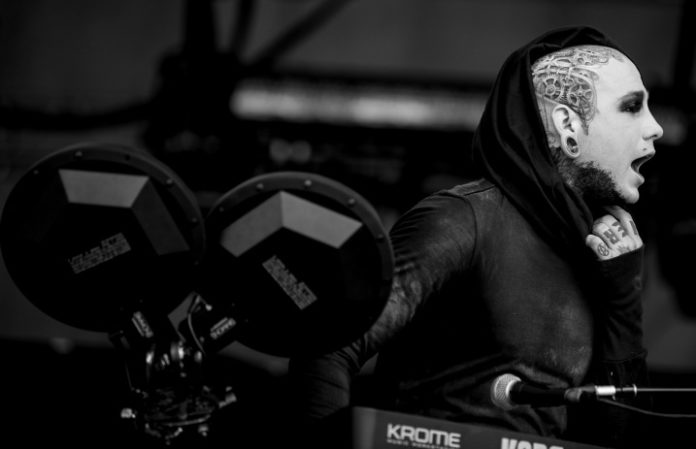 Fans and interviewers alike often wonder what musicians would be doing if they had chosen a different career path. Perhaps Billie Joe Armstrong would be a painter and Corey Taylor would be a special effects artist. But when it comes to Motionless In White's keyboardist Josh Balz, we can safely say when he's not touring or recording, he's hanging out in his hometown of Kingston, Pennsylvania, running a rather unusual shop of his own creation.  Back in late 2013, Balz and his girlfriend, tattoo artist Ryan Ashley Malarkey, decided their love of all things odd and macabre could be put to good use.  Beginning by selling antiques and obscurities from their own personal collection, and along with the help from some of their industry friends, the pair launched The Strange And Unusual Oddities Parlor, which has since grown into one of the largest of its kind on the East Coast. From taxidermy frog change purses to Ouija boards to antique Victorian furniture from all around the world, Balz and Malarkey welcome you to their world of the wondrous and weird.

What inspired you to actually open up The Strange And Unusual Oddities Parlor?

JOSH BALZ: My girlfriend and I used to actually collect a bunch of weirder stuff. Our dates would be going out to estate sales, flea markets and antique stores. We had skulls and taxidermy, and it kind of built up so we had excess—what were we going to do with all this stuff? We were sitting down one day and were like, “Well, why don't we just open up a store and try it out?” We wanted to have things that people can afford. We have things [in the shop] that cost a dollar to thousands of dollars. You would never guess the things that people are into. We have things from raccoon tails to taxidermy ducklings to wet specimens to human skeletons, but then we have things like furniture. We have antique frames, tchotchkes, and stuff like that. There's a little bit of everything, which is what we really wanted to do.

What has been one of your favorite items that has come through the parlor?

We have a full-size lion, which I love. It's one of my favorite things, along with all the wet specimens.  We have a preserved fawn, like a little baby deer, and I love it. It looks like he's sleeping. Basically, everything we have in the store is cruelty-free or sourced ethically because we're huge animal people. People are always weird about it, and it's definitely for certain people, but we're not like out back hurting the animals or anything like that.  We're very ethically sourced. I try not to get attached to things, but I definitely have favorite things like the lion. We have a full human skeleton and I also like a lot of the framed bugs. I frame a lot of the bugs myself. We do all of that stuff in-house, so it's really cool to be able to have a finished product that you made that is so unique. I do stuff like framed bats or bats in lanterns.

Did you start framing animals when you opened the store or had you done that previously?

We did it a little bit previously because we just wanted to try it. We do it on such a bigger scale now. It's actually a cool thing to do because we don't order the bugs already done.  We get the bugs, we hydrate and pin them ourselves. Then we let them dry out and cut glass and we frame different backgrounds. It's a really tough process, and it's definitely not for everybody because it's very hands on with like spiders and beetles and stuff like that. We wanted to try it because we couldn't afford to order pre-framed bugs because they're very expensive and if we bought them pre-made, pre-framed, we'd have to sell them for a lot more money. We wanted to be affordable, so the most affordable outlet was for us to do it ourselves.

Yeah, we actually opened a second store in Philadelphia recently; it actually opened last month. We needed a partner because I'm touring 10 months out of the year and my girlfriend Ryan is tattooing 10 hours a day. We wanted to open a second store, but we just didn't have the manpower to be able to take on a project that big, so we took on a partner [for the second store] and the partners were Cloven Hoof— Kristi Matt and her husband, Steve Matt.

Along with Cloven Hoof's taxidermy, you guys recently started selling Black Craft Furniture.  Why did you guys want to start carrying known brands?

I've always been friends with Bobby and Jim, the owners of Black Craft. I used to tour with Bobby years and years ago and I remember he was always talking about starting a clothing brand. Basically, all the stuff in our store is us or by friends; it's a very close-knit community, so we wanted to bring Black Craft into the situation as much as we could. When we first opened, they actually gifted us a bunch of shirts to sell for the store, and they tremendously helped us out. They recently came out with the furniture line and I knew that the store was a perfect place for that type of looking furniture; it definitely fit in our world. It's a very gothic, baroque style, and it looks awesome in the store. So definitely it's a big thank-you for Black Craft. They always help us out, so we'll always have a relationship with them.

Yeah, she actually has a private studio connected to the back of the store. It works great because there's a separate door, but people can browse in the store if they’re early or whatever. They get to actually enjoy their time waiting and they get to see cool things. Also, it helps the store, too, because some of those people will buy things or they'll use their word of mouth and send more people to us. So it's definitely good cross promotion for the store and her work as well.

How has being in Motionless In White benefitted your findings for what you sell at The Strange and Unusual?

It's actually awesome because we tour 10 months out of the year. We tour in every state and a ton of countries and different continents, so I get to know people that are interested in the same type of things, and some people are getting rid of certain things. I remember one time we were driving through North Carolina on a day off and I bought a Victorian couch and the guy met me at a truck stop at 4 or 5 o'clock in the morning. We shoved in the bay of the bus. We were going towards home and I just dropped it off there!

If you could get anything for the store—your dream item—what would it be?

Realistically, I have always been into dinosaurs since I was a little kid. Ever since I was younger, I wanted to be a paleontologist. So I would say if I could have anything, I would want a fully articulated T-Rex or Velociraptor, just a fully articulated dinosaur, which would be almost impossible to get because if anyone found one, it would have to go, to a museum or something like that.

When you were a kid, did you think you would grow up to be doing any of what you are doing now?

I definitely didn't think I'd be doing what I'm doing now. I think when I was younger, I always wanted to be something that was “cool,” like a paleontologist or a professional athlete.  When you're a kid, you always want to be the craziest thing in the world, but now it's like, do I have the best of both worlds?  Kind of.  I get to work with dead stuff, and I mean I'm not technically a professional athlete, but I'm a professional musician. We definitely get the same feeling, the travelling and the fans and the stuff like that. It's very humbling to be just a normal dude and just have the things that I have. It's very cool, and it's very interesting. I never would have seen myself here.  But being here, I'm very happy where I'm at.