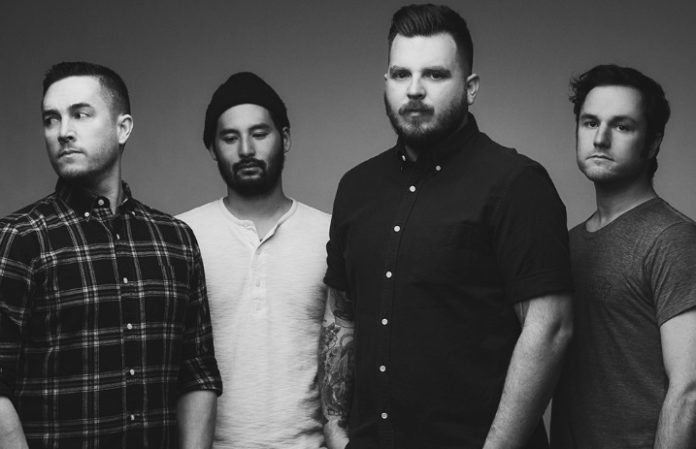 Thrice will always occupy a special place in the history of AP. Not only were they on a split cover with Thursday back in 2003 (which also presciently featured a poll titled, “Is Emo Sexist?”) but alongside acts like Glassjaw and the Used, they helped ring in what the New York Times memorably referred to as “The Summer Of Screamo,” which ushered in a new era for the magazine, as well. We loved Thrice so much that their drummer Riley Breckenridge even had his own advice column in the magazine (“Ask Riley”) where he answered questions from aspiring musicians, before teaming up with Chantal Claret for a revamped life-lessons column, “Battle of The Sexes.”

We were especially heartbroken when Thrice called it quits in 2012 after 13 years together and eight studio albums that showcased their shift from a melodic punk act to a post-hardcore juggernaut that prided themselves on creating music that didn't cater to any one subculture. Thankfully that didn't last long, and not only did the band begin playing again last year, but later this month they'll be releasing their first album in five years, To Be Everywhere Is To Be Nowhere. We caught up with Breckenridge while he was keeping one eye on his newborn baby to discuss the genesis of the new album, the difference between a hiatus and a break-up and the way the music scene and technology has shifted during Thrice's absence.

A lot of current AP readers may not remember your advice column “Ask Riley.” How do you look back at that experience?

It was a great opportunity and in a roundabout way it kind of pushed me into doing some freelance stuff and pursuing writing a little bit more. It was cool because at the time that column started we had been a band for maybe 10 years, so we had done the indie label thing and we were toward the tail end of [being on a] major label. I just wanted to try to help people out who were getting a band started or young bands that were looking for guidance and share my experiences to see if I could impart any wisdom on them. I got a lot of positive feedback from people so hopefully it worked.

“At the end of the day, the most important thing is still writing good songs and playing them as often as you can.”

That was only 10 years ago, but things have changed so much that I'd imagine that your advice would be completely different these days.

Totally. That was kind of the end of the era where social media wasn't the most important thing on Earth. For young bands now, it's tough. I don't know much about promoting Facebook posts or how to set up a proper tweeting schedule or SEO stuff. But I think at the end of the day, the most important thing is still writing good songs and playing them as often as you can. I don't think that's changed.

That said, the technology that you used to create this album wasn't really available back then. How important was that when it came to making To Be Everywhere Is To Be Nowhere?

Very important. The file-sharing stuff and recording programs are so far along that there are bands that make full-length records in their bedrooms, so it was super-helpful because we were spread out. Teppei [Teranishi, guitarist] was outside of Seattle and couldn't be down here to jam as much as we normally would for a record, so we'd build songs out in Logic, share those sessions via Dropbox and the guys would just  cut and paste ideas that they had for certain parts of songs. Then we used a productivity app called Asana, which is set up like a message board, so instead of sorting through 5,000 emails looking for comments on somebody's version of a song, everything is laid out in this long thread so you can see the entire history from the initial idea to how the song was built out. Technology definitely played a huge role in the making of this record.

Was there any apprehension in making a new record because there was a chance if it didn't work out it could taint Thrice's legacy?

I guess that it probably depends on who you speak to in the band, but it's definitely something that crossed my mind a bunch. Like, “What if we totally lay an egg with this record and everybody's bummed? We had such a great thing.” But at the end of the day, I'm just super-grateful and excited to be making music with these guys again, and to have Thrice back in my life as a creative outlet, that it was a risk worth taking. I think we ended up making a good record. We're proud of it and we're excited to see what people think of it—and if people don't like it, we'll make another one. [Laughs.] I'm already excited to make the next record.

When I had Dustin [Kensrue, guitarst/frontman] on my podcast last year, I mentioned that Thrice had broken up and he stopped me and was like, “Dude, it's a hiatus” and totally called me out on it.

“I had hope that we were going to do something again whether it was play some shows or make a record or both.”

I guess I always thought of “hiatus” as a more noncommittal way of saying you're breaking up. Did you always know that Thrice was something you would eventually come back to?

Yeah, I mean Dustin laid it out for us. He was like, “I just need to take a break. I definitely want to do this again at some point, but I just don't know when that's going to be” and I'm kind of a pessimist so I was like, “Oh, it's going to be never.” [Laughs.] He's gonna start this new job and start this new life in the Pacific Northwest and it's going to be great for him and there's going to be no reason for him to come back in the fashion that we're back now. But I had hope that we were going to do something again whether it was play some shows or make a record or both. I think that Dustin explained this was a hiatus in the truest sense of the world when he presented the situation to us and in his letter to our fans. He just needed to take a break and kind of got that out of his system and I think we're all excited to be back doing this again. The vibe in rehearsals and stuff so far has been awesome.

Over the past five years you've all continued to make music but it's so different: Dustin's was super folksy, yours was so heavy and Eddie [Breckenridge, bassist and brother] played with Knapsack. Do you feel like all of those projects not only kept your chops up but also influenced this record in a way?

Maybe a little bit. I definitely see the way that Dustin's songwriting and vocals have matured as a big part of this record. I don't know if Ed's Knapsack stuff really figured into things; I guess it helped him keep his chops up, but I don't think we have any ’90s emo influences on this record. [Laughs.] For me I was trying to keep my chops up any way as best I could. Puig Destroyer is all just goofy and programmed stuff, but it was good in a way because we've written every Puig Destroyer song the way Thrice was doing demos for this record by sharing them virtually. But I don't know if any of our projects directly influenced this record all that much.

I know it's speculative, but do you think if you never went on hiatus and made a follow-up to Major/Minor in, say, 2013 what do you think it would sound like?

Sonically, it's hard to say where we would have been four or five years ago, but vibe-wise and morale-wise I think we're in a far better place now. The reason we took the hiatus was because Dustin was pretty burnt, Teppei was kind of thinking about doing other stuff and it wasn't the right time for us to jump back on that make a record-tour-make a record-tour cycle.

“You get to your point when you're a medium-sized band where you're like, 'Am I really going to be doing this for the rest of my life?'”

Is it weird that all these bands you used to tour with over a decade ago like Thursday and Atreyu are back together despite the fact that most of you have kids by now?

It's super-weird. [Laughs.] I think it's just an age thing, and since none of those bands were extremely successful like a Foo Fighters or a Pearl Jam or something, you get to your point when you're a medium-sized band where you're like, “Am I really going to be doing this for the rest of my life? I'm X years old, I need to think about settling down and starting a family and having kids.” I think a lot of our contemporaries probably went through that and were like, “I need to think about doing other things and think about my future instead of just riding this moderate success until it flames out,” I guess. I don't know if that's bummer thinking, but that's how I feel.

You're taking La Dispute and Gates on the road with you this summer. Have you kept up with newer bands while Thrice was out of the picture or have you been in full-on domestic mode?

I still try to stay up to speed on what's going on. I'm maybe a little less familiar with the Warped Tour world, but I feel like I'm pretty good at staying on top of what's happening in the scenes. I'm super-into heavy, sludgy stuff. I'm always searching Bandcamp for stuff that I'm into or just trying to find new bands that inspire me or that I enjoy listening to, but I definitely don't have my finger on the pulse the way I did 10 years ago.

Similarly, it's only been five years since you went on hiatus but I'm sure even doing press is different now because, for instance, it seems like everyone has a podcast. Is it strange starting that process over again?

Yeah, it seems much busier. The podcast thing is a big one for sure; I've definitely done a few of those and have one of my own. [Laughs.] It just seems like there are more outlets than there used to be. There used to be a few main websites and print magazines, but now there's a boatload of websites and podcasts. It's definitely been keeping us busy, so I have to remember how to speak again.

Well, you totally spoke coherent English for this entire interview so you're off to a good start.

Perfect. [Laughs.] The first few interviews I did once we started doing press for this record were really rough. I was like, “I don't even know what I'm talking about.” I had to remember to be brief and not over-explain because I have a habit of doing that. [Pauses.] I'm probably doing it now. AP