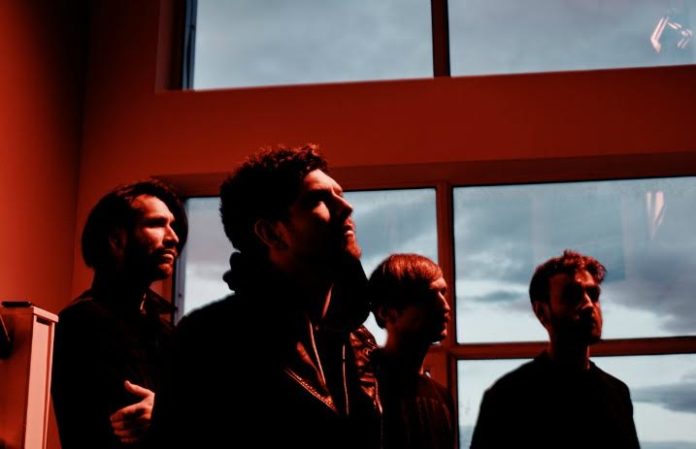 Whether you know Twin Atlantic from their stint on 2012’s Warped Tour or their recent performances at Download or Pukkelpop, we know you’re excited for their third album, GLA.

We sat down with frontman Sam McTrusty to talk the new album, his influences and how they’re throwing off expectations for good.

The title of the album (GLA) is named after the airport code for Glasgow and most of the album is informed by your hometown and your roots. Why is your hometown's significance such an influence on this record in particular?
I think it's just a matter of timing. There's nothing too mystical. It was just going through a slight evolution and turning a corner. We started feeling really proud of the place and wanted to chew off a little more. And also, we've been a band for nearly 10 years. We're pretty settled now. We started off when we were kids and now we're men. It's a moment of ownership—of ourselves, of our music, of where we're from. It felt like it was a really honest, artistic statement to make and we didn't want to lie to ourselves or anyone else. We're kinda going through a phase of not really caring about much else—just a really selfish moment. [Laughs.]

“When so many others are looking for fantasy and escapism, we're giving the antidote.”

Was there one moment that made you come to that conclusion or has this just been building up over your last few releases?
I think it's a bit of both. There was a moment when we decided on the album name—I suppose that's a clear decision point. We were in Topanga, [California] recording. We made a bunch of demos [and] when we finally got into making final recordings, it was like, why are we choosing this batch of 12 songs out of the 40 we've got? We just couldn't stop writing. We started to see a distinct attitude change in our music and how it matched our attitude as people. We were [asking], “What makes us who we are?” A lot of self-aware questions everyone starts to get in their late 20s.

I think it was just a really simple—it's funny, I just talked about it for 20 minutes, but at the time it took us two seconds. Like, “Oh shit, we should call this record where we're from.” But we'll call it GLA since we'd been calling it that in shortform as a joke, cause it sounds like, gangster. [Laughs.] But now, in retrospect, it has become this big, artistic statement. With the state of rock music, it just feels so ballsy. Putting us on the cover, putting the name of the city we're from on the cover—just being as real as possible, when so many others are looking for fantasy and escapism, we're giving the antidote.

Do you normally overwrite an album and cut down? Or is that a new experience?
Well, this is definitely the one we wrote the most for, but that's because it's the first time Ross [McNae, bass] and I worked together on ideas from scratch. We kinda embraced technology and it was easier to share ideas and go to Ross' home studio. It made it feel fresh and exciting and—I know this is cliché—but it felt like a different band, in a way. Before, I would just find a moment in a dressing room or a van or a hotel or whatever.

I guess when we started this new way, we were able to experiment much quicker and make mistakes and learn from [them]. We were just finding the darker corners to our musical taste and like, sharing them with people.

I just didn't want to do anything else. I hardly saw any of my family or friends in December of last year, I don't really remember much about it. I just sat at my computer [with] guitar pedals everywhere, and I couldn't get to sleep at night because I was air-drumming along to ideas in my head. It became a bit of an OCD passion project again, which it was for us back in the beginning, [because] when we were trying to prove ourselves, we would obsess over it. I guess we've proven quite a lot over a year in the U.K., so we might've gotten a little jaded or whatever, but that fire came back because we were working in a new way.

Was it that insomnia that inspired the song “No Sleep”?
I don't even know why it started, but I guess it's maybe traveling and having all these things booked gives me this—I guess anxiety is the best way to describe it. Having [my] whole life planned out ahead of [me] freaks me out. Total first-world problem, I'm really aware of that. [Laughs.] I guess I've just kinda suffered from a young age with anxiety stuff and when we started getting into “No Sleep,” the energy that the riff made and how visceral it was…it was the first time I've felt like putting that angle in a song.

There also seems to be a prevalent theme of “identity” on the record—where you belong and where you're going and if those are the same place. Was that intentional?
When I started writing for this record, lyrically and stuff, I just felt really confident and comfortable in my own skin. If I said anything that sounds like that, I think I'm trying to make people think about themselves, rather than me—unless, subliminally, I am? [Laughs.] I could be. If I am, I'm not aware of it. I think I know where I belong and I'm pretty comfortable being a frontman in a band and all that stuff. I've come to think of that as a normal thing, which is insane, but cool. [Laughs.]

There's another energy you get being from a city like this, and such a small country, as well. We had just been through a massive referendum vote that didn't go necessarily the way a lot of people wanted it to and there was civil unrest and a lot of people literally taking to the streets to show their passion and beliefs. I think I was trying to bottle a lot of that energy, just to truly reflect a modern take on a city with this much history and evolving open-mindedness.

Was it difficult to have such a Scotland-centric headspace and then go record in California?
You would think that was a crazy move! At the time, no, because we have such a close affinity to [California], because our record label is there and when we first got a deal, we went straight out there to meet everybody and we lived in Santa Monica. It's a lucky place to call a second home. In between recording, we've got a lot of friends and I can drive around without a GPS, which is a huge victory. [Laughs.] The guy we recorded with is from Dublin, [which] is a very similar place to Glasgow. We had a like-minded person at the helm with us and we were recording in his family home, so we were always quite grounded.

With your third record, you're at a place where expectations have shifted. You've been talking a lot about not caring what anyone else thinks—was that how you guys attacked this?
We did have expectations put on us, but by other people. Our last album, we had a kind of hit single in the U.K. Not like, a mega hit. A mild hit. [Laughs.] We were dipping in and out of pop-rock stuff, just to see if we could do it. I've always thought that was the hardest music to write. I think that gave people the impression that we were just going to do that again, but better. We had a lot of pressure and expectation to do that. So we kept ourselves in the studio, locked ourselves away because we didn't want any outside interference.

As a band, the whole process was so radically different than anything we've ever done before. To explain why we're saying we don't really care, in terms of like, how many it sells or who loves it or hates it or the pressure—we never thought at the end of our last record that it was possible to make an album like this, an album that we would actually put on at home and listen to. Rather than coming from an arrogant, ego-driven thing, it comes from like, a selfish, total-pride-in-your-art, artistic sense to us. That's why we made another album. We didn't really know what to do when the last one finished, it was so successful. We didn't want to make an album for the sake of it, we wanted to do something with a bit more purpose. I'm on a mission to shake things up a little bit in the rock world.