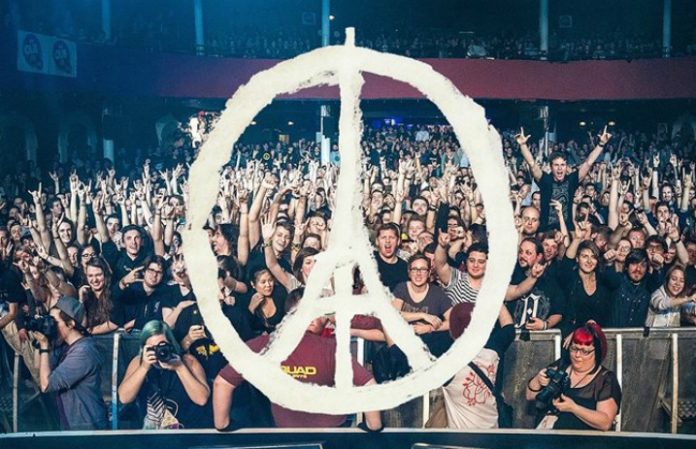 On Friday night, for the first time in my life, I felt unsafe at a music show. I’ve been to hundreds of them—including crust punk concerts in dirty basements and violent, dodgy hardcore shows. But as a white, straight, cisgender man, I am privileged and fortunate enough never to have had to worry about what would happen to me at any of them. As cheesy as it sounds, once you pass through the door, music events are supposed to make you feel free to be yourself, no matter who you are. Especially in the alternative scene—where people are dedicated to and bonded by the music they love—the shows have to be places of relief and release.

On Friday night, I was watching friends open for Australian avant garde prog-rock band Closure In Moscow in a tiny bar in eastern Paris when I got a text from a friend who knew I was out. She was telling me there had been a shooting in the city center. She even gave me the name of the restaurant—Le Petit Cambodge—and the number of people dead: 20. She was home, but one of her friends was close to the scene. It was a little before 10 p.m. and nothing was in the news yet. I’m a news journalist myself and I know to handle this kind of word of mouth update with caution. I also knew Twitter would have more info before the media did. There was nothing official, but people were indeed talking about shots fired. Things were confused: They were not talking about the restaurant but about Le Bataclan, a 1,500-capacity music venue not too far from Le Petit Cambodge.

My girlfriend was having drinks with friends in a bar close to Le Bataclan. She texted me at the exact moment I started texting her: “We’re locked in the bar. Sixty Kalashnikov [AK-47] shots at Le Bataclan.” This was the beginning of a long, stressful night texting my loved ones and updating my Twitter feed every 30 seconds as Closure In Moscow—unaware of the unspeakable horror unfolding in the streets surrounding us—kept on performing to a progressively less attentive crowd. There were explosions at the Stade de France, another shooting down the street where our show was and an endless stream of rumors fueled by fear and frenzy. I stayed in this bar alone until 3 a.m., glued to my phone charging in a corner, following official instructions not to come out and watching the number of victims rise to 129. From my screen, I witnessed the worst but also the best that followed: people were opening their homes to people stuck out of theirs.

I wondered if I had the legitimacy to take the floor and write this op-ed. Then I realized I did for the exact same reason those 129 people were killed (and hundreds more wounded, physically and mentally) by those terrorists: I live in Paris. This is the only reason those people are dead. We’ve heard much about “the French way of life being attacked” and this is just self-comfort: Through us, ISIS was attacking France and our government. Once again, their wars, our deaths.

Maybe you did not relate to the death of journalists and caricaturists, the targeting of Jews or to the mass killings of Muslim and Christian civilians in the Middle East by ISIS drawing significant influxes of migrants and refugees to Europe. But this could have been you in this concert hall. This could have been your favorite band onstage and their crew behind the merch table. The only thing every single person killed that night had in common was that they were trying to be happy on a clement Friday night in the city of love: enjoying a soccer game, a meal, a drink, a concert.

It could have been all of us. Fuck, it was all of us. I am appalled to see that everyone here knows a friend, a coworker, an acquaintance who lost someone in that tragedy. They’ve lost a sister, a son, a wife, a best friend. What we’ve all lost may be the biggest crime of all: a part of the innocence which characterizes the youth of those neighborhoods attacked on Friday night. They stole that. No matter how many times people are being enjoined not to be scared because it’s “playing into the hands of terrorists”, they are and they will be. Hopefully only for a little while, but chances are we’re going to look over our shoulder in public places and think of the people of Le Bataclan, Le Petit Cambodge, La Belle Équipe, Le Carillon, Cosa Nostra and the Stade de France for some time.

And it’s okay. It’s okay to be scared and it is overcoming this fear that will prove our courage and make us honorable. Some of us will have a hard time going back to shows and maybe won’t even ever find the strength to do so. But most of us will eventually because, just like having an overpriced coffee or glass of wine on our terraces, it is part of our life and part of what makes us happy. Bands are going to be afraid, too. I can’t imagine how hard it is going to be to go onstage at Le Bataclan and put your soul into a room where 89 people lost theirs. No one should be rushed to recover or feel forced to do anything. But if any bands are reading this, be advised: It may take a while to recapture the insouciance that once was between these walls, but we will claim back our concert hall together. Music venues are places for living, not for dying.

A lot of Parisians ignored the city’s motto, “Fluctuat nec mergitur” (“Tossed but not sunk” in Latin), until it became a symbol of Paris resistance in the face of terrorism this weekend. I too, learned a lot about Paris in the past few days. And although I had never considered myself a Parisian in my four years living here, I’ve been feeling like one since that text on Friday night.

Romain Jeanticou is a 26-year-old French journalist. He was raised in the Basque country (southwest France), but has lived in Paris for four years. He works as a news reporter and freelance writes music-related pieces. He has been involved in the punk and alternative scene for over 10 years. You can find him on Twitter: @RomainJeanticou