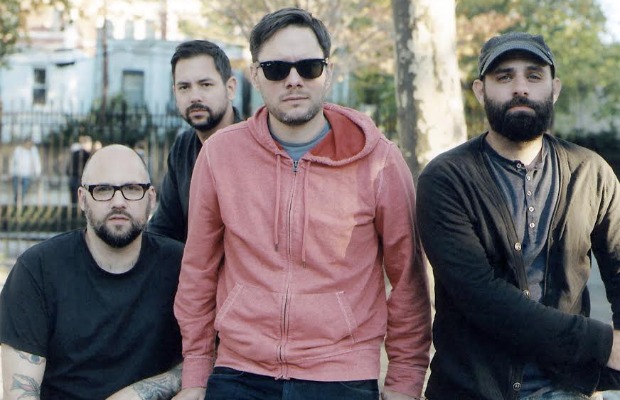 Maybe you've heard of the Jazz June, maybe you haven't. The group formed in 1996 at Kutztown University in Pennsylvania and during that time, they released a handful of albums on Initial Records that had some attributes in common with their peers in the emo scene, while maintaining an off-kilter sensibility that was wholly unique. The band—vocalist/guitarist Andrew Low, guitarist Bryan Gassler, bassist Dan O'Neill and drummer Justin Max—quietly disbanded after releasing 2002's Better Off Without Air, just as acts like Jimmy Eat World were transitioning into becoming household names. Last year, the group started playing again and on November 12, Topshelf Records will release After The Earthquake, the Jazz June’s first full-length in 12 years, produced by Evan Weiss (Into It. Over It.).

Jonah Bayer spoke with Low—who currently lives in London—about the how the album came together, what things were like for the Jazz June back in the day and why he's isn't concerned with what the haters think of his band—who were embraced by plenty of people, but seemingly misunderstood by just as many. Armed with both new music and a fresh perspective, the tide will finally shift for the Jazz June. It's about time.

This new album sounds a lot different than much of the previous Jazz June material.
ANDREW LOW: It's funny, because I try not to read the comments or the reviews but I have seen a few where people say, “This is great, I love it” or other people are like, “What do you mean, this sounds nothing like the Jazz June.” I've been writing and playing music ever since the Jazz June stopped. A lot of the time I was writing on my own, especially since I moved to London. When we started talking about writing a new Jazz June album, I had already written six or seven songs on my own and then recorded them to GarageBand with a click track and sent them around and it just started to come together really naturally. To me, they're just new Jazz June songs; I guess it's hard for me to really comment on it, but I suppose it's just getting older over the years.

How did Evan Weiss come into the mix? What was it like working with him as a producer?
He's such a funny guy. Brian met him at a show and Evan knew of the Jazz June from back in the day. They started talking and Brian mentioned we were doing a new record and Evan said, “I'd love to do it.” That was really it; they met at the gig and we started sending him songs online. It was good because when we got into the studio with Evan, even though we didn't know him well, he knew all the people we worked with in the past but was also confident enough to go like, “Why is this song six minutes long? It should be two-and-a-half.” He really helped with song structure and he's also amazing at playing everything, so we'd go, “We'd like a keyboard part here,” and he'd go, “I know exactly what to play,” and go record it because we didn't have a lot of time to fuck around.

The Jazz June were never a super-popular band. Do you think there's a misconception today that you were a bigger deal when you were around?
I think it's probably because we played with Jimmy Eat World, Saves The Day, Jets To Brazil… We played with every single one of those bands, but that was before Saves The Day had that song on MTV and Jimmy Eat World had any hit songs. There was definitely a sense that a big shift was happening; I remember the Get Up Kids played this festival in Pennsylvania and they were like, “We just sold 400 CDs today,” and we sold 10 that day. [Laughs.] So it wasn't like everyone was scampering for emo bands, it was just that some of the bands were getting really big. But I'm happy how it went back then and how it's going now because we always made our own decisions and never had to deal with a lot of the bullshit that happens on that level. Even the fact that someone wants to put out our record now is great because that's something that hasn't happened in a really long time.

I remember when American Football and Mineral announced their reunion shows some people were like, “They are just dong it to get rich,” which is hilarious.
It's funny because there was a podcast I was listening to—and I don't want to say the name of it—and I think we announced a 7-inch and American Football announced a gig the same week, so they were talking about us both in the breath. One of the hosts said, “You know, the guys from the Jazz June and American Football, I don't mind, they can use this money for their families” and it's like, in the last year, I've lost £500 [approximately $815. —finance ed.] going back and forth to America! [Laughs.] I'm not complaining at all, but again, it's this perception that you play a show and it's going to sell out and make loads of money and you make a record and get rich. Right before our last tour when we were still in Pennsylvania, we ended up opening for Built To Spill—which was amazing—and later on I was working in my hometown coffee shop in Red Bank. Some of the kids who were drinking coffee said, “Oh, you like Built To Spill?” I said one of the best nights of my life was getting to open [for them] and they were like, “We were at that show! You were in the Jazz June and you have to work?” I was like, “Oh my God, if you only knew.”

At the same time, you're kind of held to a higher standard for being around during that era because it's been so built up over the years.
We did an interview the other night and the person asked us, “Are you afraid of the kickback you’re going to get from people in the emo scene because this record is so different?” I was like, “Really? Are they going to hate us in the emo scene?” Because it isn't like we went from sounding like Slayer to Fleet Foxes. The other thing is that we used to get all the hardcore kids going, “What the fuck is this bullshit girl music,” so we're kind of used to that, anyway. We always used to have really bad reviews, people would say mean stuff about my song titles because I had one song that was called “Drop The Bomb” and they were like, “Stop trying to be a rap band.” I'm just expecting people to hate on us, so I'm not really concerned about it. alt