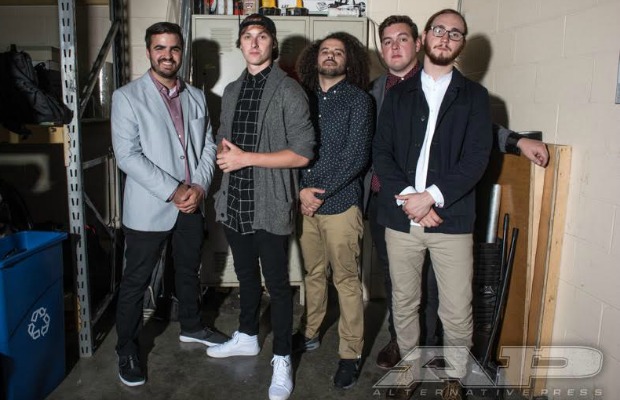 Even though they’re about to drop their next full-length, State Champs still took yesterday to look back and celebrate two years since their first studio album, The Finer Things. Fresh from a European tour leg and anxiously anticipating the release of their newest creation, Around The World And Back, vocalist Derek DiScanio and guitarist Tyler Szalkowski were happy to chat about touring, recording and how much they can truly pack into two years.

Two years ago, you guys were releasing your first studio album and now you're about to start on your first international headliner. How's the last couple years been?

DEREK DISCANIO: Honestly, thinking about it now…it's been a crazy journey, especially when you realize it's only been two years. It's good timing and it's a good sense of accomplishment, if anything. We just finished up the final touring leg of our first headline tour in the UK and Europe and it was so successful. Just to see the growth from when [The Finer Things] came out has been really exciting, and now we're home and taking a little breather before the next album—so it's cool, we're all waiting right now to get back out again.

What was going through your head when you were just finishing up with The Finer Things?

TYLER SZALKOWSKI: We didn't really know what to expect, it was our first record and we were just like, “I hope people like it! We like it, we think it's sick, hopefully other people think it's sick…” I don't think we were particularly worried about anything crazy, though. There was no real plan in place—we just made a record and wanted to put it out.

DISCANIO: Yeah, there wasn't too much pressure or anything off the first album, except for the fact that it was our introductory album, and we knew it would be people's first listen of us. Like, “here's who we are, let's see who's down and who's not.” It was a different kind of pressure, knowing we have a fanbase now and there's a little bit of anticipation this time. Going into [The Finer Things], we can't say that we weren't worried, but we kind of took that and built from it. It definitely got me going—I like pressure anyway—but it made me just work a lot harder. It helped us experiment, now, having one album under our belts, to take our sound to the next level, and we're really proud of what we came up with. But coming out with The Finer Things, it was more of a, “Let's see what happens here,” since it was still so early for us as a band.

What's changed then, in terms of the writing and recording process?

DISCANIO: It's a lot different now, cause with [Around The World And Back] we didn't have a lot of time at home to write. We've been to so many different places on the road now since The Finer Things came out, and now we were demoing things, writing lyrics, writing riffs, getting everything compiled together before we went and recorded ATWAB. But for TFT, it was mostly just us at home, hanging out, like, getting together with acoustic guitars and jamming. It was very laid back and [with ATWAB] it wasn't so much rushed, just experimental in our approach.

SZALKOWSKI: Yeah, as far as TFT goes, it was our first record, we got this little recording space in this warehouse and we just wrote the songs. Now, we had an upper hand ‘cause we knew how it went last time. The process didn't really change, but it was weird cause we were writing songs in Australia and Japan and places like that, but I don't know if that even matters for me, since I only write guitar parts. I did a lot of writing just by taking my guitar before we went onstage and jamming in the green room. I really wouldn't say the process changed too much apart from just having more time on [The Finer Things] and taking our time there.

Does that change of setting and exhaustion from touring affect not only how you write, but what you write about?

DISCANIO: Yeah, Tyler was saying he could riff anywhere, but it gets a little different when it comes to lyrics. With me, [TFT] was just about everyday problems and first conflicts and whatnot that would come to me. This time around, the atmosphere was a lot different, plus we're on tour and traveling a lot, so you're dealing with separations from loved ones at home and overcoming the struggles that come from traveling and being away from people and moving on from bad situations and things like that. So the mindset changed a little bit, but at the same time, it's just me trying to be as relatable as possible. I wanted to make it more optimistic—a triumphant-sounding record. It's a little bit of everything, I'd say.

If you had to sum up The Finer Things in one word, what word would you choose?

DISCANIO: I want to say “life-changing” but at the same time, we're the same people. But it really did introduce us to this whole new kind of life.

SZALKOWSKI: I wanna say “youthful”…like, I'd wanna say “juvenile,” but I think that has a negative connotation. I feel like youthful is a good word cause we were young—I mean, we're still young—but now we have the perspective of experiencing all these different cultures, scenes and music and I feel like now we're so much more grown—as musicians, as songwriters, as people—I feel like, TFT was very youthful, it just breathes youth.

DISCANIO:  Yeah, and that goes along with what I was saying about how much we've learned since then, and how much of a learning process it was for us too. Yeah, let's go with “youthful.”

What do you think has been your biggest WTF moment in the last couple years?

SZALKOWSKI: I dunno, some of those 5SOS shows were very “what the fuck.”

DISCANIO: Yeah, if anyone's gonna step out on a stage to 15,000 people, it's gonna be a “what the fuck” moment for pretty much anybody. But, I think one thing that's been uplifting for us is the chance to go on these headlining tours and play our shows, knowing that everyone coming to the shows are there to see us, to see a State Champs show. We just got done with our first headlining tour overseas, not even in our own country, being in UK and Europe and having sold out shows in places like London, Belgium, Amsterdam…places like that, walking out onstage and knowing that everyone there is so locked in and ready to have a good time with you because it's the music you made. That's something that really makes us be like, “Wow, this is something that's so real and makes us feel really good about our lives and just where everything is right now.” It's a heartwarming feeling.

At this point, you guys have toured with a pretty diverse group of bands. How has being with those different bands influenced you both as a band and as individual people?

SZALKOWSKI: That's a tough one. Touring with diverse crowds, as far as me individually, [that] keeps us super-open-minded. We don't like to have very many closed doors, and I think that it's up on a personal level as well, we don't like to be pigeonholed or have limits. We try to remain positive, like, saying that you can do whatever and it'll be good.

DISCANIO: Yeah, we never wanna set boundaries for ourselves. We're always trying to tour with different-sounding bands and not be afraid of who to open ourselves up to. It's cool now, since we've done tours with so many different kinds of bands and made a lot of good friends out of that who have showed us a lot along the way, especially regarding touring. It's cool since there are so many bands that set the bar for us when we started too, and bands that we still look up to, even to this day. [We can] now call them friends of ours and know they've helped us so much to get us to where we're at—now, to even be [a band] that maybe smaller bands can look up to. That's really cool. It's a big circle within the scene, which is a really cool thing.

A lot of bands seem to wait a certain amount of time to tour and make their first album cycle. Now being that it's been two years, it's “long-awaited” now that we have our second album out, but it's cool for us to be able to have done so many things in between, music-wise. I mean, obviously we were touring our asses off, but we got to do an acoustic album last year that was half the songs from The Finer Things, but in a toned-down, mellow setting, which I thought was really cool. We got to do the Punk Goes Pop feature where we covered “Stay The Night.” It's cool since a lot of little things have happened between then and now, I think we're finally ready to get our second album out. I hope everybody's ready to move onto the next chapter with us.

SZALKOWSKI: I just wanna say, thank you to The Finer Things for providing us with some of the most insane and memorable and cool experiences of our lives, since without making that record, who knows what I would have done? Sat in Albany and did nothing, I guess.

DISCANIO: Yeah, it's definitely something we'll never really forget, and something we'll always look back on and think it was the first chapter of something really cool we got to experience and are trying to take as far as we can.

SZALKOWSKI: And thanks to anyone who was a part of that chapter with us, that bought or downloaded The Finer Things. All of that helped us live this really cool period of time.

Stoked for Around The World And Back? Check out altpress.com this Monday—we'll be streaming the whole album!