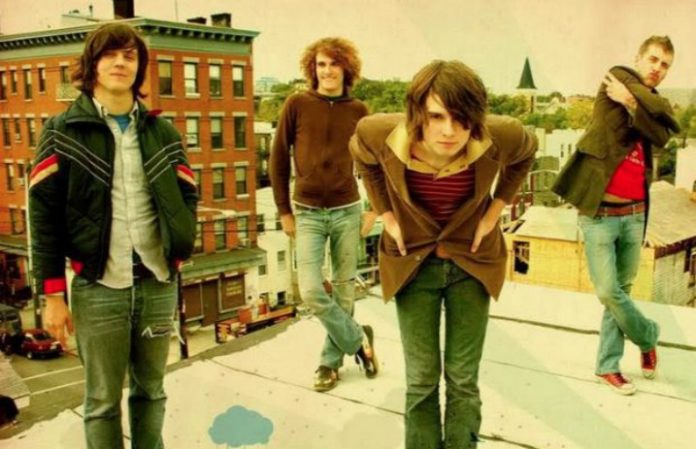 Nearly four years ago, the Academy Is… announced their demise on the eve of a planned tour with Jack’s Mannequin. So for fans who never got a final chance to see the bandit was doubly sweet when TAI announced they’d be reuniting at this year’s Riot Fest Chicago to celebrate the tenth anniversary of breakthrough debut Almost Here was doubly sweet. We caught up with frontman William Beckett to find out if the band’s reconciliation is the beginning of a second life, or simply a second chance at ending things on their own terms.

First of all, you just got off tour with Aaron Gillespie [Underoath, the Almost] and Nathan Hussey of All Get Out, right?
WILLIAM BECKETT: Yes, yes. It was great. I’ve known Aaron for years, but we never really got to “know each other” know each other, you know? We got to hang out a bunch. It was great to get to know him more. And Nathan was amazing, of All Get Out fame. He would bolster my indie cred just by hanging out with him. I think that we had a really great dynamic between all three of us. We kind of bring different styles to the table, but we’re all pretty proficient in performing. It’s always a pleasure when you’re on a tour where everybody can sing. You know what I mean? I’ve done a lot of tours in the past where that isn’t always the case.

This was a talented group! I’m curious about the audiences that came out. Were there people who were fans of all three of you? Or was everybody there for one guy, and kind of discovering the other two?
A lot of my fans actually traveled and followed the tour for more than one show. I’d see the same people, the same faces, eight shows in a row. They really loved, and took a liking to, both Aaron and Nathan. So it was cool that they were exposed to new music. It was a soul-enriching environment just because of all the shared fans that came together. To do a tour like that–we’re all selling our own merch, it’s four dudes in a van driving around the country, pretty much a throwback to how we all started. Zero percent ego, and I think that the fans really appreciated that, to see something that genuine. Genuinely genuine.

Ok, so now that tour is behind you, on the big news! Not too long ago, you announced that the Academy Is… would be getting back together for this year’s Riot Fest in Chicago, to play what has been dubbed a “farewell show.” When did Riot Fest approach you with that offer and when did you decide that, yes, it was something you wanted to do?
We all know it’s been 10 years [since Almost Here was released] and all these other [10-year] tours have popped up, and it’s like, okay, constant reminder that other bands are doing this sort of thing, as well. But for us, it’s not much about that. We knew that Riot was interested early in the year. And for us, honestly, it was a phone call. Me, Adam [Siska, bassist] and Mike [Carden, guitar] on the phone for three-and-a-half hours. Adam was in Mexico at the time so he was paying out the ass for his roaming minutes. We couldn’t get Skype to work. Sorry dude! But it was like it never ended. That conversation—and our conversations since—it’s been like we hadn’t stopped talking for years.

Had you talked at all during the hiatus?
No! Mike and I, we didn’t speak since I decided to leave the band, in the van. We didn’t even speak once. So it was crazy that we could just get back on the phone and it was as if not even a day had passed, and it was three years later. We just wanted to touch base and see how everyone was feeling about it. And everyone was really, really happy about doing this and having the opportunity to celebrate this record that changed our lives. We never really had a farewell tour or show, so it seemed to make sense for us.

You just mentioned leaving TAI. Is that something you’d be up to speaking about a little more, now that you guys have reconciled?
We had our own vision for what our fourth record was going to be. At the time, we were on Atlantic Records. Things were kind of shuffling around at that company. We delivered these demos that I still, to this very day, think are fantastic, and were exactly what ended up getting big on the radio. Which is ridiculous, because they were like, “This doesn’t sound like radio.” Well, we don’t give a shit, we never did give a shit if it sounds like radio, but it ended up totally sounding like what radio would have been two years later.

I just got beat down by [the label]. Submitting these songs that we were working our balls off [on], and really trying to do it the right way and not go on three-month co-write missions with randos. We wanted to do it the right way. No to say that there’s anything wrong with co-writing–I’ve co-written a lot, and I enjoy it–but for us, it was like we were really onto something, and I just got beaten down by the label not hearing it. And our team was collapsing a little bit, and the pressure just got to me. I didn’t want to put out–none of us wanted to put out–a bullshit record. So that’s how we left it.

So now you guys have reconnected. I’m not sure I’ve seen which members are officially taking part in this reunion.
It’s going to be Carden, me obviously, Adam Siska and the Butcher [drummer Andy Mrotek]. So it’s the four who were with us for the most time. The original three was always me, Mike and Adam, so it’s essentially the same guys. We’re going to have a friend who’s going to play guitar, as well.

Did you get in touch with [guitarist Michael Guy] Chislett?
No. I don’t really want to talk about Chislett.

So from the start, was this going to specifically be playing Almost Here or was that something that came up later?
It’s the 10-year anniversary of Almost Here, so that was natural. It was part of what Riot wanted us to do, and that’s how we’re pushing it; we’re going to play it front to back. But since it’s 28 minutes long, we’re going to have to play something else, as well. That’s a phone call for this week actually; we’re figuring out what other songs we’re going to sprinkle in there.

Let’s say that, hypothetically, you would be open to other Almost Here shows. What would the conversation around that be?
I think if it makes sense, and everyone was on board with it, much the same as the Riot Fest situation. There’s not much more I can say about it without us fully having that conversation, you know what I mean? I think it’s something that—if us doing Riot Fest and our outlook doing that reflects anything—I don’t see that it would be an impossibility to do more.

You’re enjoying each others’ company again so far.
So far! [Laughs.] I’m thinking, “One thing at a time.” We’ll see how Riot goes and then we’ll kind of go from there. It’s in no way us reforming. We’re really just trying to celebrate the record, and do it for each other, ourselves and the fans.

It’s “in no way” you guys reforming? Does that mean talks of possibly going into the studio are out?
Like, it hasn’t even been discussed, you know? We haven’t discussed that whatsoever. I’m trying to make a new record too, so it’s like… you know.

And is that intended to be another William Beckett solo record?
That’s kind of still in the works too. But it’s not an Academy Is… record.

So, possibly a project that we don’t know about yet?
Right.

Can you tell me how much you’ve written, or what exactly this is?
I’m sorry—I’ll get poked in the eye if I say anything about anything else that I can’t talk about. Which I’ve gotten in trouble for in the past. But yeah, I’ve got a bunch of new material. I’ve been writing over the past eight months. It’s different.

What kind of direction is it taking?
I did just hang out with All Get Out for a month… No, I’m just joking. I’m kidding. I don’t know, it’s maybe a little darker than Genuine & Counterfeit. It certainly is a little darker, actually. Just trying to get out of my comfort zone. Genuine & Counterfeit I’m extremely proud of, but it’s kind of a record full of “nice” songs. Nice ones. They all sound nice, and nothing’s offensive. I kind of need to make an angry record, so that’s what I’m doing next. alt

The Academy Is… will play an 'Almost Here' show in Chicago September 10.