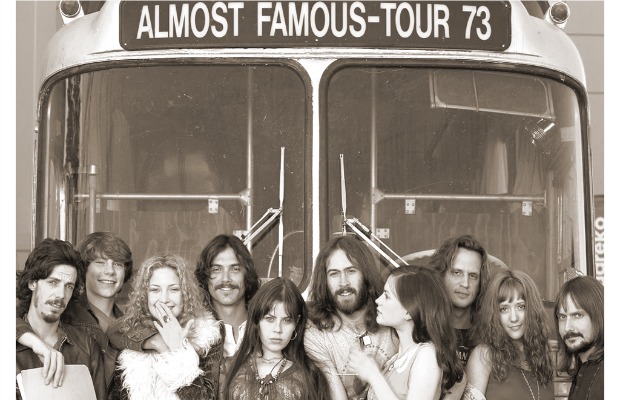 Unlike albums, I don’t get super-emotionally attached to movies. Sure, I have my favorites, but I’ll never expound on the merits of Clueless like I will In Defense Of The Genre. Of course all that changed with Almost Famous.

In case you’re unfamiliar with the movie, here’s a quick recap: Cameron Crowe’s semi-autobiographical film is about a budding teenage journalist named William Miller, who nabs the ultimate music writer gig: Following Stillwater (not a real band) on tour, and writing about it for Rolling Stone. Along the way he gets life advice from Lester Bangs, falls in love with a band-aid named Penny Lane (not a groupie—big difference) and gets deflowered. He does end up getting published in Rolling Stone, but his journey there is much more interesting.

I still remember how old I was when I saw it (15) and where I watched it (the bedroom of my childhood best friend). After seeing it, I immediately decided being a music journalist looked like the coolest job ever, and I was going to make it my career. What the movie didn’t show me were all the late nights I would spend on deadline, awkward interviews I would suffer through and freelancing (emphasis on the free) I would do before I made it to AP. Regardless, Almost Famous did teach me several important lessons.

1. Every musician wants to be on the cover of Rolling Stone.
“He looks harmless but he does represent the magazine that trashed Layla, broke up Cream, ripped every album Led Zeppelin ever made. Don’t forget the rules, man. This little shit is the enemy. He writes what he sees. Although it would be cool to be on the cover.”

Look, bands, can you stop pretending you don’t secretly dream of this? Hell, I’m not even in a band and I’ve dreamt of it. Stillwater spend much of the movie trying their best to keep budding music journalist William Miller from learning any intimate details about them, thwarting his journalistic endeavors to see his byline in Rolling Stone at every turn. But even they can’t contain their excitement when they learn they made the cover of Rolling Stone fucking magazine.

I seriously hope my brothers aren’t reading this, or I’ll never hear the end of it. Anyone with an older sibling knows that sometimes they can be total jerkfaces who try to suffocate you with a beanbag chair (ahem, Stacy). But other times they give you some much-needed life advice. If you’re really lucky, they’ll leave you their record collections.

3. Everyone needs a cool (and slightly unstable) mentor.
“That’s because we’re uncool. And while women will always be a problem for us, most of the great art in the world is about that very same problem. Good-looking people don’t have any spine. Their art never lasts. They get the girls, but we’re smarter.”

Some of the best lines in Almost Famous were said by Philip Seymour Hoffman who played real-life music journalist, Lester Bangs. He asked questions most journalists didn’t, wrote for Creem and Rolling Stone and had a lot to say about Lou Reed. He also had some drug problems and died of an overdose at the age of 44. Bangs was far from a perfect mentor. He was just an average guy who treated musicians the same way they treated him. As Bangs said in an interview not long before his death, “It seemed to me that the whole thing of interviewing, as far as rock stars, was just such a suck-up. It was groveling obeisance to people who weren’t that special, really. It’s just a guy, just another person, so what?”

4. Some rock stars are a bit full of themselves.
“I am a golden god!”

I Am a Golden God
Almost Famous — MOVIECLIPS.com

You know the scene in the movie when Stillwater guitarist Russell Hammond climbs to the roof of the house party he’s at and proclaims his holiness? Well, he wasn’t the first rock star to do it. Led Zeppelin frontman Robert Plant shouted the same thing while on his hotel balcony at the “Riot House.” (You know, the Continental Hyatt House.) I wasn’t there for Plant’s golden god moment, but I’m just gonna assume his statement was laced with sarcasm, not acid punch. Most musicians are pretty cool people who are able to leave their larger-than-life personas on the stage. Then there are a few who think they’re God’s gift to rock ’n’ roll. It’s best to walk by them quickly and not make eye contact.

Hey, we get it. Hanging out with your favorite band sounds like the best birthday present ever. But don’t make the same mistake our protagonist William Miller did—unless you want to end up heartbroken and jaded, blowing off deadlines and professing your love to a girl who just took too many Quaaludes.

6. Drugs are bad. Seriously.
“And you can tell Rolling Stone magazine that my last words were… ‘I’m on drugs!’”

Your middle school D.A.R.E. instructor was right: Don’t do drugs. No matter how tasty that punch looks, avoid it at all costs. Because after one cup, you’re gonna want another, and another, and before you know it, you’re waking up in a stranger’s house in Topeka, Kansas, wearing only your underwear.

7. Call your mom more.
“Rock stars have kidnapped my son!”

She’s the most important woman in your life. Pick up the phone. (And no, I don’t mean send a text.) Tell her hi. Be a good kid.

8. “Incendiary” is a fucking great word.
“And the guitar sound… is incendiary. Incendiary. Way to go.”

Seriously, how great is this word? It means “designed to cause fires, tending to stir up conflict, very exciting.” I haven’t been able to work incendiary into an album review yet, but it’s definitely going to happen.

There’s a reason this is the most-quoted line from Almost Famous, a movie full of delicious witticisms. If you’re reading this, chances are you already know how powerful of a healing tool music can be–although I’m still waiting for someone to explain to me what exactly I’m supposed to see when I light a candle and listen to Tommy.