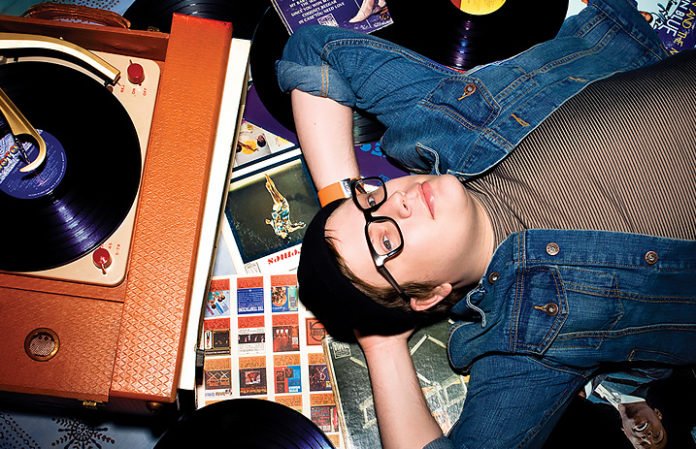 David Bowie died Jan. 10 after a long battle with cancer, just two days after his 69th birthday and the release of his 25th (!) album, Blackstar. There’s no overstating the impact of the pop icon on many of our scene’s luminaries—artists who in turn shaped so much of the sound and culture that’s part of the fabric of the alternative community: Trent Reznor and Marilyn Manson count themselves among Bowie’s many outspoken acolytes. Gerard Way’s debut solo album, Hesitant Alien, owes much to the late trailblazer of pop, fashion and film who brilliantly used “alien” as metaphor. Stone Temple Pilots singer Scott Weiland (who died in December) was unapologetic about his Bowie worship on his own debut solo album, 1998’s 12 Bar Blues. Even with so much affection for Bowie from so many artists, it’s hard to imagine a bigger Bowie fan within contemporary music than Patrick Stump. Fall Out Boy’s frontman was kind enough to share his thoughts on David Bowie’s passing with AP.

AS TOLD TO RYAN J. DOWNEY

I’m such a David Bowie fan you’d have thought I lost a relative from the amount of emails and calls I’ve been getting since he passed away. So many people asking me, “Oh my God, Patrick. Are you okay?”

My wife saw me [after his death] and she asked, “Why aren’t you crying about David Bowie? I thought he was your favorite guy?” See, when Robin Williams died, I wept like a baby. I was so upset. He died suddenly and very tragically. We didn’t want to think about Robin Williams being sad. Even in his death, we were confronted with that. He’s Robin Williams! He’s this wonderful part of our childhood. But there was a real man there that we sort of ignored when we were listening to him as Genie in Aladdin.

As a kid, I was familiar with him from the movie Labyrinth and his bigger pop hits like “Modern Love” and “China Girl.” He was always there, but the first time I noticed him— like, really noticed him—I was in the car with my dad driving through Chicago. We were listening to this station called WXRT and they played “Sound And Vision” from Bowie’s 1977 album, Low. It was so weird, so different from anything I’d heard, including anything I’d heard by him. I’m sitting there listening and I said to my dad, “Oooh, I like this” and I turned it up. But then I got really self-conscious. I knew the song was weird so I wasn’t sure if that meant it was “uncool.” So now I’m like, “Hmm, I don’t know…” And my dad’s like, “It’s totally cool to like David Bowie.”

Three of the first five records I ever owned on vinyl were Bowie albums.

When you’re getting just little snippets of songs like “Rebel, Rebel” or “Dancing In The Streets” with Mick Jagger, you may not really know the difference between Bowie and the Rolling Stones. But when you start to get a glimpse of the different chapters of his career, you realize this guy could do anything. In the ’90s he made Outside and went on tour with Nine Inch Nails! Could you imagine Gary Glitter out there with Trent Reznor, or anyone else Bowie was lumped in with in the ’70s? He transcended all of that glam-rock nonsense and whatever else, by a long shot. Right before the release of Earthling, he had a 50th birthday show, where Lou Reed, Robert Smith, Dave Grohl and Billy Corgan all played songs with him.

As a fan, I expected Bowie to die in a laser bath on Mars, or something. Or perhaps he’d go out nose-first into a literal mountain of cocaine. I didn’t expect him to die of something normal people can die from; he felt like a fully transcendent character who would live forever. There’s a part of me somewhere inside going, “I really thought he was an actual alien!”

As legend has it, The Thin White Duke subsisted on a diet of red peppers, cocaine and milk while living in Los Angeles and recording Station To Station. That was another reason we didn’t expect him to go, because he survived all of the drugs in the 1970s. If this man was ever going to die, it would’ve been in 1976!

It makes you think about your own mortality in a funny way, because it’s like, “Oh wow, David Bowie can get cancer? That’s crazy.”

We didn’t know the person. We knew the transcendent character. We knew the character of David Bowie and it just seemed like we’d always have some new, crazy, brilliant David Bowie idea. It was the same with Lemmy [Kilmister] from Motörhead. He was always going to be there, right? We came to expect him as an anchor of rock ’n’ roll badassery.

David Bowie is someone I made sure to never meet. I didn’t want to know him, ya’ know? I literally had Bowie posters all over my wall before I was even a teenager. But that doesn’t translate to me wanting to know all about his personal life. I wanted to know everything about his art. I wanted to know more about the art than the man, but of course, I read all of the biographies and all of the articles.

As Davey Jones, he tried to be a “normal” pop star. But the truth is he never could be. He had to be David Bowie. It was his only option. He was super cool, so very unique, this weird, strange, honest, earnest thing.

From what I understood, he was obsessive and nerdy about all kinds of subjects. He needed to know everything about anything. He would sit and pour over philosophy, jazz, poetry, whatever. He really absorbed everything. I’ve heard legends about him reading an entire book everyday; consuming art, interacting with art, contributing to art.

There were some people that did the Ziggy Stardust look. That was a thing you could impersonate. But you couldn't hope to even come close to the way he could speak eloquently but almost haphazardly about art, or how he could make art that was challenging and at times frustrating, but always brilliant. David Bowie is the coolest thing ever. There was a great Cracked article a few years ago about “celebrities you idolize and celebrities you resemble instead.” A natural part of life is accepting that while you may eventually be really good at something, you’ll never be as cool as David Bowie. Never. I pity the guy that plays him in the biopic.

In 1998, before social media, Bowie offered fans a chance to have unique interaction with him and his art through BowieNet, which was actually an Internet Service Provider, like AOL! You could even have your own BowieNet email address. I’d like to believe that BowieNet has now achieved sentience and Bowie simply exists within BowieNet now. Seriously, he gets to just be a legend now. No review will ever touch him.

His death makes me want to really openly embrace the people who created the things I like even more. Let’s celebrate Paul McCartney. George Lucas! I love you! I’m so sorry that we were angry about the Star Wars prequels. Thank you for everything.

As Warren Zevon said, “Life’ll Kill Ya.” We will all die someday. But I would imagine this is what it felt like when Mozart or Picasso died. For the fans, like me, it’s an honor to have lived at the same time as David Bowie. ALT