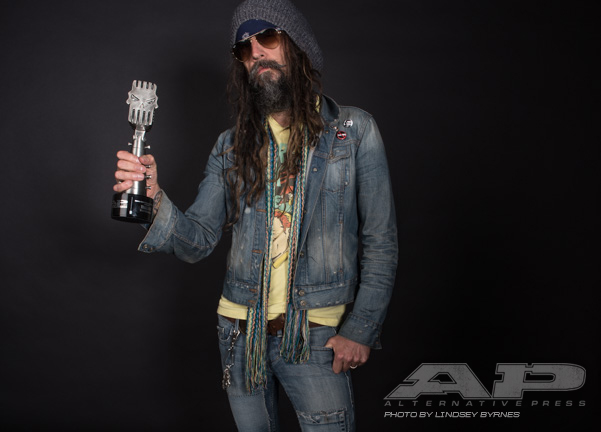 Rob Zombie went home from the APMAs with one of the highest honors of the night: the Vanguard Award. We sat him down right after he accepted the Skully to talk about being an innovator, his upcoming projects and where fans fit into his creative process.

Congrats on receiving the Vanguard Award.
Thank you.

Vanguard is an interesting word, because it means innovation and someone who leads the way in the creative movement. How does it feel to be recognized not just for longevity, but for innovation?
I mean, it's great! I never thought about it that way, I still don't. People say that to me, and I go “Well, that's great–if I can innovate anything or influence anybody, that's cool.” But I never think about that stuff.

What can you tell me about your new album coming out after 31?
Well, the album's finished. It's sitting in the can, I just gotta shoot a bunch of videos and do all that crap. That'll come out probably March. And 31 will probably be wrapped up in November. That'll probably come out early 2016.

And this was your first project that you crowdsourced. Why was it important to get your fans involved in that?
It pretty much goes without saying that it's important to get the fans involved with everything. But with movies, it's not usually been the case until now. So to get fans involved early, talking about it and being part of it–some cases some of the fans were extras in the movie. It's just kind of a different thing. I think it's just a world where people don't like to watch things from a distance anymore, they like to be as involved as possible. So it's kinda cool.

And what do they add to your creative process?
The fan thing for me really comes in later. When I'm making stuff, I'm not influenced by anybody–not the people I work with, not fans, not anybody. I do my thing and I have to stay focused because too many opinions just fuck with your head. But after the fact is when it becomes important. Today exactly is the 10th anniversary of my film The Devil's Rejects, and where the fans are important is when they take a movie that's 10 years old and they keep it alive all the time as if it's new. They act excited about it like it's something that just came out even though I remember as a kid, 10 years might as well have been a million years. That's where the fans are great.