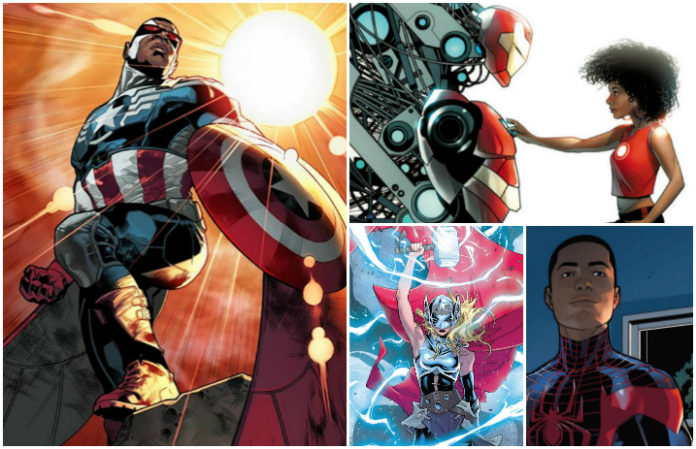 Marvel’s movie studio has made more than $21 billion since their universe launched in 2008. Their success has convinced what seems like every other major studio to create their own interconnected universe—DC (currently on pace to give Marvel a fight within five years), Spider-Man (RIP Sony’s dreams), Star Wars (don’t Jar-Jar Jinx it), and even Universal (fingers crossed it works out for them this time around).

As great as Marvel’s big screen financial success has been, muscular white men can only carry them so far. It doesn’t look like Black Widow will get a solo movie any time soon, and chances are Bucky Barnes will be the next man to hoist the Captain’s shield. Yes, we’re getting a Black Panther movie in two years, but why do we need to wait half a presidential term to see Chadwick Boseman in theaters when we can simply turn to Netflix in two weeks to see Mike Colter as Luke Cage take command of Harlem? Fan-favorite Carol Danvers, who took over the mantle of Captain Marvel in 2012, will be Marvel’s first heroine to get a solo movie—but not until 2019.

Marvel’s future depends on the diversification of its leading characters. Their CEO already made headlines earlier this year by donating $1 million to Donald Trump’s fundraiser for United States veterans—a noble cause unfortunately championed by an ignoble man. Luckily for the film team, they have a new set of blueprints prepared at the same location that gave them the inspiration for their upcoming crop of heroes.

Marvel’s comics have the flexibility to publish multiple versions of the same character—just ask the countless versions of Spider-Man giving window washers in Queens extra work on the weekends. One of the liberties they took was to give Cap’s winged friend Sam Wilson the shield. An old white man passing the torch to a young black man—feels presidential.

Speaking of presidential, our very own President Barack Obama helped inspire the creation of Peter Parker’s replacement, Miles Morales. While Donald Glover played a huge role in the conception of this web-slinging hero, creators Brian Michael Bendis, Sara Pichelli and Axel Alonso have said that our current commander in chief was part of the reason we can read about a Puerto Rican/African-American Spidey in Ultimate Spider-Man today.

It’s not just a boy’s club on Marvel’s printed page. Mjolnir chooses its champion based on worth, and over time the Norse prince of thunder overstayed his welcome. Jane has proven to be more than great enough to wield the ancient hammer, defending Earth’s mightiest heroes from the collapse of the Multiverse, Battleworld and every challenge in between.

Tony Stark isn’t the only genius superhero to come out of MIT. We still have some time before Riri officially takes over as Marvel’s favorite college dropout, but grab some popcorn because she has every chance to become a fan favorite.  She reverse-engineered her own Iron Man suit in her dorm room out of mostly stolen materials, and her creator Brian Michael Bendis has proved himself to be an exceptional storyteller—there’s a reason he’s shown up multiple times on this list.