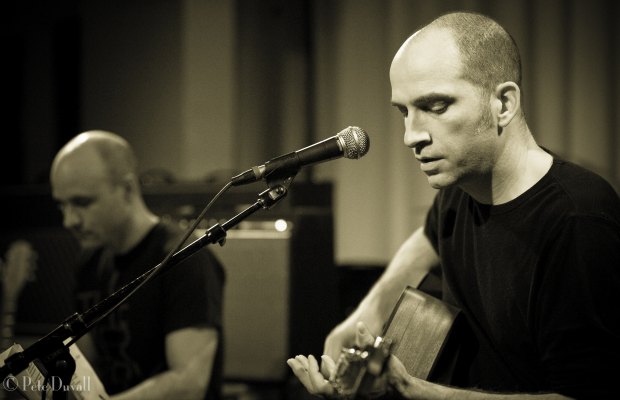 This week, J. ROBBINS, the vocalist/guitarist from such respected outfits as Jawbox, Burning Airlines and Office Of Future Plans goes out for a string of seven shows, along with Jonah Matranga (Far, New End Original, onelinedrawing). The dates are a great opportunity for fans to hear Robbins and his cohorts from Office Of Future Plans—cellist Gordon Withers and bassist Brooks Harlan on keyboards—acoustically recontextualize songs from his career, versions of which appear on his recent digital-only EP Abandoned Mansions.

Robbins talked to Jason Pettigrew about the impetus behind both this trek and the new EP, the challenges of not being able to hide behind a wall of noise and why he’s okay with ’90s alt-rock bands reuniting. (Spoiler alert: He’s not going to their gigs anyway.)

Your reputation is well known in the underground as a dynamic player and vocalist. These days you’re known as the captain of Magpie Cage, the facility you have in Baltimore that’s recorded a lot of new bands. Your last band Office Of Future Plans don’t do that much. What prompted you to do this tour with Jonah?
J. ROBBINS: I don’t really tour at all. I’ve known Jonah for a long time, but I only know him slightly well—we’ve been sympathetic to each others’ cause. [Laughs.] When he was in New End Original, we talked about working in the studio, but it didn’t end up working out. Then I did this project with Jeff Dean, the guitarist for All Eyes West who also used to play in the Bomb with Jeff Pezzati. Dean came down to Baltimore because he had a bunch of songs that didn’t have a home. He got me and Darren Zentek—the drummer in the last several projects I’ve done—to be the rhythm section and I recorded the session. There were no lyrics, just music. And after a while of just sitting on this tape and wondering what was going to happen with it, Jeff contacted Jonah and ended up getting Jonah to sing. Jonah ended up only doing two songs, and it was just released as Moral Mazes on Bridge Nine Records. We were all really happy with how it turned out, so we’ve been in touch more lately.

Jonah told me he was coming to the East Coast. He just wanted to do something; he didn’t know if we could maybe get together a band and try to do some electric shows as Moral Mazes. But given that Moral Mazes only have two finished songs, it didn’t seem too likely. So I pitched back to him that we could do acoustic shows together. Those are something I’ve been doing for awhile. Even though I have Office Of Future Plans, it’s kind of a nominal band. We play very, very rarely; we rehearse very, very rarely. It’s the classic thing of everyone being older and having real-life responsibilities. And I’ve spent 20 years of my life touring, touring and touring. I’ve burned out on that card. [Laughs.] So nobody in my band wants to tour or play shows for a long stretch to sacrifice themselves on the altar of an eight-week tour we used to do in our 20s. But I want to play.

So these shows are kind of like “A Night Out With J,” playing material from various points of your career. What was the motivation for this?
There are a lot of songs from bands that I have been in that I really missed playing. Particularly in the case of Jawbox material: At the time Jawbox was together, I did not think of myself as a songwriter. I took the role of singer because I just felt like somebody had to do it and I didn’t want to have to worry about anybody else doing the job. I elected myself as the traffic cop of songwriting but I never thought of myself as “the songwriter of the band.” The whole point of Jawbox was that it was a collaborative enterprise. Looking back at a lot of the material, I had to admit to myself I wrote a lot of those songs. There are moments where I feel comfortable saying, “That’s my song,” and it will stand up to a different arrangement. Playing electric guitar, I go down a rabbit hole writing these kinda weird, architectural guitar parts that are spidery and play around with sounds and tones—they’re not simple. On an acoustic guitar, I can’t do that—I can just play chords. It’s kinda nice because it turns the song into something much more simple basic and open, as opposed to a labyrinth.

The tracks on the Abandoned Mansions EP have an urgency to them one wouldn’t expect from hearing them on acoustic instruments. You don’t need the decibels. Were you pleasantly surprised creating those arrangements or was it neither an issue nor a revelation?
It was definitely an issue. It’s funny with me that I’m so excited to do the acoustic stuff. In 2010, [Beauty Pill guitarist] Chad Clark was curating a performance series in a space outside of D.C., and he was the person who invited me to do a solo show for the first time ever and have Gordon play with me. Gordon is an exceptional musician, so I thought that no matter how hard I choked, people will still have something to listen to because Gordon is awesome. I was definitely worried about the songs holding up at that point.

I remember a long, long time ago seeing a Bob Mould solo show. At the time it made me really uncomfortable, in a way that I really have come to prize. When I saw him play solo—whether it was acoustic or electric—he was sitting in a chair, but the energy coming off the stage and the intensity of what he was doing was exactly like seeing a Hüsker Dü show. At the time, he was playing like he had a loud drummer bashing behind him, and maximum decibel levels, but it was just him. It freaked me out initially, but now I think it is completely awesome. It’s a real serious risk. When you’re in a band, there’s comfort in sheer volume and feeling the air moving. To be acoustic is to be naked; you’ve got to really believe in what you’re doing and put it forth. And I love that challenge. You can’t fake it.

Well, if people aren’t faking it, they’re doing the cash grab. In the thick of the ’90s underground/alt-rock scene, many people had a we’re-taking-over mentality that was genuinely sincere, sometimes arrogant. They weren’t going to fall into the traps of what came before them—arena tours or the summer rib cook-off circuit. But it seems more bands from that era get back together, using the fumes of their past reputation to eke out another 15 minutes of fame, when they could be championing the next generation of bands coming up.
I don’t begrudge anyone a reunion tour. I don’t begrudge anyone the desire to play their songs and hopefully connect at whatever point. If somebody is doing anything just for the money, that’s a drag, but can you really get inside anybody’s head to determine that? I’m not worried about it, because I’m not going to any of those things, you know? [Laughs.] I’m in a lucky position where I get to record a lot of young bands so I meet people all the time who have this real genuine fire about what they’re doing.

There’s a lot of talk about “’90s revivalism” that people are mining. There are a lot of young bands that want to do something good and they want to do it for good reasons. If I had a chance to curate a festival, I wouldn’t do the obvious ’90s acts: I’d get Room Runner, Dope Body or whomever. The music that shaped me when I was younger I had to seek out. I had to go to weird places with 20 other people—I didn’t go to a festival and get exposed to something new. I had to go digging and find out. If that’s still true, that doesn’t bother me. People are also allowed to get older and have whatever opinions they have. I’m in my weird little monad and I’m lucky to cross paths with a lot of people who are inspired. The fact is that those very people have an audience of tens or hundreds, not thousands or millions. [Laughs.]

The rise and fall of the post-Nirvana boom I don’t care about. I think we can all agree it didn’t represent a takeover of anything. The whole point of this acoustic thing for me is that I didn’t look for a label to put it out—I just put it up on Bandcamp. I didn’t try to convince promoters to put me in a 1,000-seat venue. I just talked to people who were friends and asked, “Can we do something?” Maybe that means playing in a living room. The important thing is just to be doing something and making a connection with somebody. I think the whole giant rock-stardom cultural transfiguration thing that came along with the Nirvana thing is a colossal red herring. Just being revolutionary for its own sake doesn’t make a lot of sense. It has a certain allure, but it doesn’t have longevity. The thing that is really important is the motivation that made you want to start the revolution in the first place. It’s what you are carrying in your heart when you go and storm the palace. That stuff is very much alive.

On Facebook, the label Arctic Rodeo recently posted an old black-and-white live photo of Jawbox to announce the vinyl pressing of the Jawbox rarities album My Scrapbook Of Fatal Accidents. Inevitably, there is a kneejerk reaction—read: “Reunion tour?”—that follows that kind of news.
There’s an expectation that all those old bands will get back together. And Jawbox are not going to get back together. Me playing some old Jawbox songs are probably going to be the closest thing anybody’s going to see to a Jawbox reunion. I want to get back in those songs from the point of view of someone who’s not embarrassed to be singing [Laughs.] and not hiding behind a fantastic drummer.

I saw that Failure reunion: I thought it was pretty great. I was a huge Failure fan when they were together and they pulled off a really good reunion. That’s a night out—that’s fine. It’s not going magically un-elect all the Republicans or give us national healthcare. It’s more than a diversion though, because it is inspiring. Burning Airlines toured with Braid; we played enough shows to 20 people. So if Braid can do a sold-out reunion tour and a record people seem to give a shit about, that’s great. alt