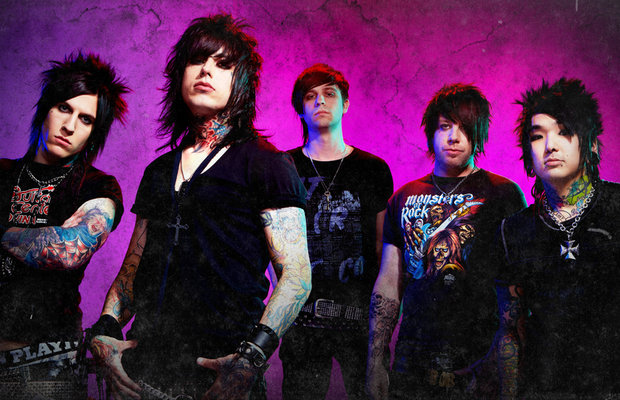 (To read more about Falling In Reverse and the return of Ronnie Radke, be sure to pick up AP #278, which is on sale this weekend.)

On July 26, Falling In Reverse (aka Ronnie Radke’s new band) released their long-awaited Epitaph debut, The Drug In Me Is You. In just a few short weeks—the August 10 stop of the Warped Tour in Carson, California, to be specific—the quintet will make their first-ever live appearance. The band’s lineup features several musicians with extensive résumés: Rhythm guitarist Derek Jones was in the Colorado metalcore band A Smile From The Trenches; bassist Mika Horiuchi played in Cellador, an Omaha-based outfit who released music on Metal Blade; and drummer Ryan Seaman has played with the Bigger Lights, Aiden and I Am Ghost.

Perhaps the most unfamiliar member of Falling In Reverse at the moment is guitarist Jacky Vincent (picitured far left). A native of London, England, the 22-year-old can be considered a music lifer. “I [was] always, like, fascinated with guitars and stuff ever since I could walk,” he says. “When I was a little kid, [my dad] gave me the first Guns ’N Roses album [Appetite For Destruction]. I was, like, six or something. That got me into rock music—and then that was it after that.”

When drum lessons didn’t take (“I wanted to be a drummer, but it was hard and I couldn’t do it,” he recalls), Vincent switched to guitar. The move was wise: He’s on his way to full-on guitar-god status. Check out his shredding on the FIR songs “Raised By Wolves” and “Good Girls Bad Guys”—or ask Radke for his opinion on his bandmate. “When [fans] hear his solos, they’ll finally see,” the frontman says. “He’s really a genius when it comes to that stuff.”

So how did Vincent get on FIR’s radar? The internet, of course. In 2009, while Radke was still in prison, music on Vincent’s Myspace profile caught the ear of former Falling In Reverse bassist Nason Schoeffler. The two exchanged messages, the guitarist uploaded YouTube footage of himself jamming—and the rest, as they say, is history. According to Vincent, he’s always been looking for a musical foil like Radke. “I was in a band at the time, but I was trying to form my own band,” he says. “I was a fan of Ronnie’s old album [Dying Is Your Latest Fashion]; I wanted a ‘Ronnie’ for the band I wanted to start. It’s funny, because how it worked out was I ended up in the band with the real deal.”

The guitarist was in the studio with Radke and producer Elvis Baskette when they recorded The Drug In Me Is You. And while much of the music was already written,  he had a hand in shaping the album’s metallic edges. “I spent a lot of time crafting the solos and trying to make them as cool as I can,” he says. “Elvis is amazing and talented. [He] loves all the ‘80s hair bands, so [we] got along really good. We had a lot of stuff [written] already, but some of the [music] we were writing in [the studio], and Elvis was telling me he wanted crazy guitar stuff. So I got as crazy as I could.  It was really fun.”

Vincent has also been able to observe Radke’s post-incarceration evolution up close. The difference between his demeanor at the start of the year and the way he is now is like night and day. “When he came out [of prison], he had to get used to being around people and stuff,” Vincent says. “But now he’s like Mr. Talk To Everyone.  We’ll be walking down the street, and he’ll be making friends. He’s definitely come out of his shell since he got out of prison. He even said to me the other day, ‘You know, I feel like I’m really getting back to being myself again.’ And I think that’s really cool.” alt