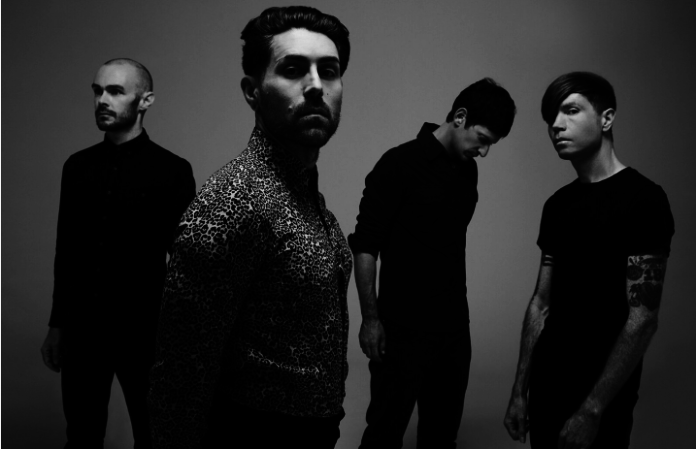 Most bands don't last 25 years. Most bands don't last 10 albums. But AFI aren’t like most bands. Not only has (mostly) the original lineup stayed together over the years, but they have also released a range of solid, genre-bending albums, constantly pushing sonic and creative expectations.

“Yeah, number 10 is a milestone,” says guitarist Jade Puget from his home in Los Angeles. “We’re in double digits, which is pretty cool. I’m really excited for it to come out—it’s been a long time in the making. It’s big for us because we don’t put out a record every year, so it’s taken a long time to get to this point.”

On Jan. 20, they will release their 10th full-length, AFI (The Blood Album), which Puget put a lot of time into as both an artist and a producer.

Considering it’s AFI’s 10th album, was there any added pressure?
No, not really. I mean, we thought of naming the album that had something to do with 10, but decided against it. [Laughs.]

Where did the album title come from?
Originally, we wanted just have it self-titled because it’s been 10 records and AFI has never had a self-titled record. But because the album artwork has these three blood drops on the front, we just started calling it The Blood Album. So people started thinking it was the actual title, and because we didn’t want to confuse anyone, we made it official.

You’re going out on the road in 2017. Is it tough making a setlist from 10 wide-ranging albums?
It can be. I’ve been the one making the setlists over the years. Every night, I’m sitting there trying to make a setlist and it’s hard. [Laughs.] With four people in the band, everyone wants and doesn’t want to play different songs. On top of that, you want to make a setlist that the fans are going to like and enjoy, so I need to balance all of that—it can get tricky. There’s so much material. I think we have, like, 150 songs recorded or something like that.

That’s a lot of power to have.
[Laughs.] It is, and with it also comes great responsibility.

Over the years, your lineup has stayed the same. Not many bands have accomplished that. What’s the secret to staying together?
Well, I’m the new guy, and I’ve been in the band for 18 years. [Laughs.] You’re right—we have been together for a long time. It’s hard. Musicians can be assholes, we really can. The artistic thing comes into play, and everyone wants their creative input to be recognized—that’s how you get into arguments and people get hurt. I think we all have mutual respect [for each other], and that’s really important because not only do we make music together, which can be a difficult thing, but you have to go on the road together and live together. So we’ve just been able to stay friends and stay respectful over the years.

You and Matt Hyde co-produced the album. What was that process like? Did you enjoy the production side of record-making?
Yeah, definitely. The whole recording was different, especially with me stepping up to produce after all this time. I’d compose the entire song and demo it out before we hit the studio, so a lot of the production was done early on. Matt was awesome and we worked really well together—that whole thing was very different for me and very different for the band. In the studio, we tried to make it flow and work very naturally because we don’t love being in the studio. That’s the work part of it and we love the creative part, the writing, and the enjoyment part is going on the road. So I did the vocals with Davey [Havok], just he and I in a room together while the drums were being tracked. Dave and I have always just wanted to do the vocals just the two of us and make a record like that. It was awesome and I loved it.

There’s a pretty heavy New Wave presence on the new album.
Yeah, there is. When Dave and I write, we don’t really have anything intentional; these directions just come out of us for one reason or another. People have been saying that AFI is ’80s for like 15 years now, so the fact there is New Wave on there isn’t that surprising. But there are songs like “Above The Bridge” and “Feed From The Floor” that have this definite Cure-esque, New Wave thing going on. That kind of music is just what we listened to when growing up, and I really love that element of the record.

AFI have very deep roots in punk rock. What do you think of the current scene? It’s pretty tough to define these days…
Yeah, if you're talking about first- and second-wave punk or American hardcore in the early '80s, those were more clearly defined movements, but “punk” has become a broad, vague term over time. It might mean something different than what it meant when I first started listening to it in the '80s. I'm no expert on the state of punk in 2016, but I'm sure there will always be a vital punk scene, especially in other parts of the world that are only now experiencing their golden era of punk.

The last time we spoke, you said AFI doesn’t really fit in with the current punk scene anymore. I kind of disagree. I see your influence in many places, especially in the current scene. Do you see that?
Yeah, I guess so. I’m happy with that. AFI definitely came from punk and it’s crucial to the beginnings of this band. When you listen to our new record, you’re not going to be like, “This is a straight-up punk album.” But some of that is still in there. The spirit of that genre is still there. We still do this music and still do this band for the same reasons when we were a punk band. So in that way, the punk spirit is still there. In another way, if people are still feeling we’re a part of that scene, even in a historical sense, I’m proud of that.

One of the things that endures in AFI’s music is the dark aesthetic that permeates all of your songs. Where does the love for that darkness come from?
It’s just something I’ve had for a long time, well before I was in AFI and well before I was even a musician. Davey’s the same way. When I joined AFI and he and I started writing Black Sails In The Sunset, we just had that thing in common we both loved and it was in perfect harmony. To this day, we’ve been such a good writing team and work so well together because that dark side and dark aesthetic appeals so much to us. Even as a kid, the minor chord and sad and emotional music was always what I was drawn to. I’m a weird guy. [Laughs.] alt