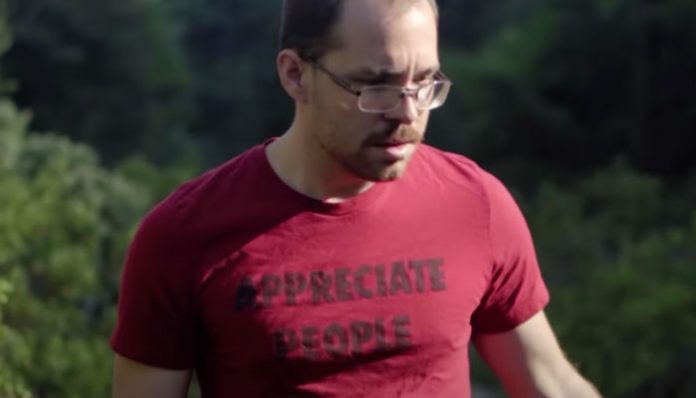 Jaime Bennington, son of the late Linkin Park frontman Chester Bennington, recently made his directorial debut with the video for “Soul Song.” The track is from the elder Bennington’s pre-Linkin Park band Grey Daze and is featured on Amends, a collection of recordings overseen by drummer Sean Dowdell, band co-founder and close personal friend of the late singer. The album also features contributions from Page Hamilton (Helmet) and James “Munky” Shaffer (Korn).

The clip features footage of his father singing with Grey Daze juxtaposed against his personal quest for knowledge and psychic health. “I think what surprised me most was the amount of trust and freedom I was given by Sean [Dowdell] and Todd Netter of Loma Vista Recordings to make this thing,” Bennington says. “It’s intense. It’s massive in scope, especially for something so small, but there were no restrictions. I was allowed to do whatever I wanted however I wanted. That’s a pretty big thing to get as a first-time director. Seriously, I couldn’t be more thankful for the opportunity. Four minutes is rarely ever enough time to make a point in film, but I think I managed to do something special here.”

Jaime Bennington explained his involvement with the project to AltPress and the intentions he wished to convey. He readily acknowledges that the experience of making “Soul Song” was more about his experience and resolution than any attempt to add to his late father’s legacy.

You’re obviously well versed in the history of Linkin Park. Were you familiar with Grey Daze in any capacity? Listening to it for this project, what were your initial thoughts about the songs themselves, your father’s performance and lyrics? What did you focus on?

JAIME BENNINGTON: I think the first time I learned of Grey Daze, I was little. Maybe 10 or something—it’s hard to remember. I don’t even know if I had heard them before my involvement with Amends. The memory comes to me as a T-shirt, but I feel like my mom had a CD or a cassette or something like that? Now that I’m really thinking about it, I would say that my work with Amends was the first time I really heard them. I hadn’t ever experienced my father at that age, so that was most definitely something special for me.

As a rule, following his death, I tried to avoid listening to his music. I had a lot of unresolved feelings, and there was no hope of grieving on my own, in my own time. People made it so that he was everywhere all the time. They made it so that what had happened was always in my face. I was made never to forget. Sean asked me to take a look at some of these tracks that would be on Amends and see if I would be interested in working on them. I admit there were reservations about any kind of involvement on my part. But it was Sean. If I trusted anybody with that, it was Sean. And honestly, the invitation alone was moving enough.

You could’ve had your pick to create any video from the Grey Daze album. Why did you pick “Soul Song”?

There were three songs that I was asked to digest. I know “Soul Song” and “Morei Sky” were two of them. But I ultimately ended up working only on “Soul Song.” I don’t think I was looking at the songs in any sort of analytical light. At that time, I was more so interested in supporting those who were trying to be constructive with their grief—something I hadn’t been able to do yet myself. No one ever said those words, though, that they were working through their grief by working on Amends.  I think that’s what made it manageable for me.

It was in January [when] I first heard the final mix of “Soul Song.” The scene was touching. Sean and I were in Hawaii for my mom’s wedding. We took some time to go over the music one on one at this little coffee shop. Can’t remember if at that point they had started putting out music videos, but I had told Sean about this film that I was making [A Chant]. I had just wrapped physical production at the end of December and offered my services as a director, if they ever should need one.

Honestly, I thought that maybe they had forgotten about that, but sure enough I got a call in May, and a few days later, I was workshopping the concept for “Soul Song” and writing out a shot list. I’m not sure if I could have worked [on] another song, but it felt full circle being able to return to “Soul Song” outside of the studio. There was zero resistance from me. It was the only song on the album I was familiar with, having recorded backing tracks a few months back.

Read more: Kevin Lyman knows that 320 festival was worth it if one person was helped

There are so many levels to the “Soul Song” video. Presenting a Bennington legacy, being conceptually sound, making a director’s statement. What were your main concerns and objectives for the making of the video?

The concept for the video was pretty simple. I had begun this practice of mindful meditation to combat my often debilitating anxiety and depression. It started off as this thing I did every once in a while to ward off nasty thoughts, and [it] turned into something far more profound and spiritual. I came to the understanding, through mindfulness, that there is more to my reality than what I can overtly see and feel. [It’s] something I’ve always felt was true. There is energy all around us. It takes on many forms, and this music video is about my many experiences with that invisible force.

Now whether or not I’ve actually made amends with my father and his spirit through this practice or simply come to terms with my feelings about his death is up for debate. However, the power of such a practice is undeniable. Through it, I have not just spoken with him but seen him with my own two eyes. And that is what this video is about. It’s about that practice. It’s about the lasting power of memory and about taking grief at my own pace. But most importantly, it is about my exploration of the world that surrounds me.

Spirituality has always been a divisive factor in any relationship I’ve ever witnessed. It either brings people together or breaks them apart. I’ve seen it in the global mourning of my father, in the confines of my own tribe and within myself. Whether people realize it or not, this is at the core of what we are as human beings. All of us are connected to this energy, to this vitality, and my efforts to accurately depict my connection to those more mysterious aspects of nature are the inspiration for the video. Hence, the heavy emphasis placed on epic landscapes, among many other things. We are many parts of a whole.

What’s the greatest lesson/measure of influence you have taken away from your father’s art?

To comment on legacy, the thought that I was preserving his legacy or celebrating his work in supporting Grey Daze never came to mind. That’s not to say that the thought never existed. I’m sure it was in the back of my head, but I would say that this video is all about me and not about him at all. A fact that will undoubtedly be difficult for people to fully comprehend given the context in which it was presented.

How did you feel after you viewed it one final time after the last tweaks and edits? What was going through your head?

I don’t know if I did a good job, but I do know that I did the best I could. The video was conceptualized, shot and edited in the span of 10 days. By the end of the editing process, I had enough. I remember just telling Marc [Silverstein], the DP/editor of the music video, that I couldn’t care less about the last special effect we were trying to render out.  I had this intense feeling of responsibility in delivering the real deal. An authentic experience. An accurate look into what spirituality is.

Amends will be released on Loma Vista June 26. Watch “Soul Song” below.