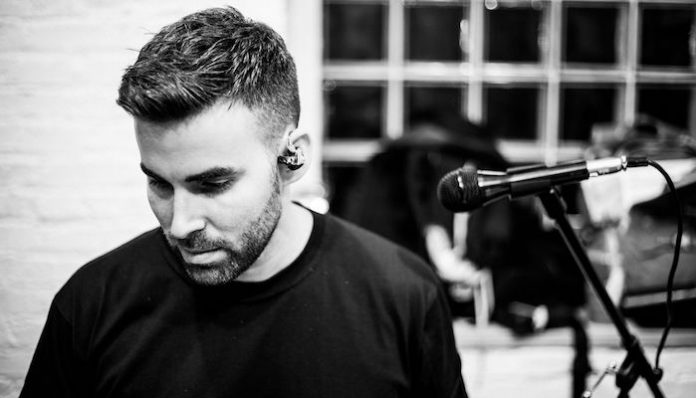 Inspired by Dave Grohl moving from the shadows of Nirvana into the spotlight of Foo Fighters, Mayday Parade drummer/vocalist Jake Bundrick wanted to try his hand at self-producing and recording a project molded solely by his own writing and creative ideas. Having played guitar for longer than he’s been drumming, he knew he could play all of the instruments on his own. Pair that with his skilled singing and harmonizing and thus, Via Fiori was born.

The intense songwriting and captivating pop/rock instrumentals on Via Fiori’s “Call To Arms” are especially poignant—you may even scream it at the top of your lungs. This energy is exactly what indicated that it would be the perfect debut single for a solo project that’s been nearly four years in the making.

AltPress recently spoke with Bundrick about Via Fiori’s inception and future, launching the project in the midst of a pandemic and drawing inspiration from collaborators and other artists. Check out the full conversation and Via Fiori’s three singles, “Call To Arms,” “I Need This More” and “Don’t Bother,” below.

Read more: QUIZ: Which My Chemical Romance era are you?

Did you have any reservations about launching Via Fiori and what the response would be, especially in the midst of a pandemic?

I thought people would relate to it, for sure so I wasn’t nervous about that. I also knew that it’s a new baby project as well. It’s going to take some time for people to realize that it’s even a thing. I was excited to put it out, especially during this time when people need music more than ever. Everybody is sitting at home, and they just need something to look forward to.

When did Via Fiori start to take form, beyond being an idea that you had played around with while making music with Mayday Parade?

The actual band didn’t come to fruition until about 2019. This was like a DIY project for myself. I was writing all of these songs, and I wanted to produce it myself. I started getting into production with co-producing Lips Like Oxygen for Oh, Weatherly [with Jon Lundin]. It fueled the fire. I was like, “Man, I feel like I could do this myself at my own house.” From what I knew, it was you go to an expensive studio, you work with a quality producer—an A-list producer—and you would come out with this great record for a relatively insane amount of money. This was totally the opposite. With a minimal amount of money and a living room, it fills out just as good. It took a little bit of figuring things out, writing the songs, but also learning more production tips that I’ve learned from people like Zack [Odom], Ken [Mount], Howard Benson and John Feldmann. Picking their brains and going, “How did you do this?” Or just watching them record something and seeing how they did it and absorbing that.

Read more: Here’s how you can see what you’ve listened to the most in lockdown

Where did the name Via Fiori stem from?

I went to a friend’s wedding somewhere in California. Right outside of the venue there was a street sign that literally said Via Fiori. There was something about it that struck me. I looked it up, and it means “by way of flowers.” For some reason, all of it reminded me of love and coming together. It felt right.

How does your solo creative process differ from your collaborative work of making music in a band?

It’s definitely different, that’s for sure. It’s nice to not have anyone say, “What if you did this? What if you put this a certain way?” It is nice being able to go, “This is the way I see it or hear it in my head” and then put it down, and you don’t have anyone standing over your shoulder thinking it could be better. But at the same time, I also enjoy having the collaborative stuff with Mayday where you can make things sound more unique or different in a certain way depending on the idea.

Which producers have been most influential to you in your career, and what did you learn from them?

Lee Dyess really helped me when we were younger to formulate songs, to be a better drummer. Every time we would go into the studio with him, he would show me something new that I would learn and take it to my writing and recording. [With] Zack and Ken, Mayday have gone to them for four records now. I don’t really know how to explain it. When I worked with them, I really enjoyed it. I had such a good time.

Read more: We could be hearing twenty one pilots’ next album sooner than we think

I know touring has always been a huge part of your life as a musician. What has been your experience connecting with fans while everyone is separated?

I always wonder when we’re going to get back to playing shows, because only time will tell. Shows were the one way you could take your music to different fans in different cities. There was this moment that you could share with people. I missed being home when we were on tour for a month. Now, I think maybe I was taking those things for granted.

The Via Fiori playlist you published on Spotify features a really eclectic range of artists, from LANY and Billie Eilish to blink-182 and the Story So Far. How did this wide range of music inspire your project?

I’m a sucker for a good pop melody—anything that’s infectiously catchy. The songs on that playlist have something about them, whether it’s a lyric, a vocal melody or some guitar or synth part. That’s a moment where you’re just like, “Yes!” The reason why artists like LANY and Lauv are on there is because I heard them for the first time, and it gave me this feeling. That first time listening to it and going, “Wow, this is incredible.”

What does the post-pandemic future of Via Fiori look like?

The whole meaning behind this project is that I wanted to have another place where I could release music with no rules. I don’t want it to be genre-specific, I want to be able to do whatever I want to do. I never had any plans on touring on this kind of thing, but if there’s a demand, I’m not going to say I won’t do something like that.