The vocalist for the Number Twelve Looks Like You keeps it real by making films and working with Congresswoman Alexandria Ocasio-Cortez.

Most people know Jesse Korman for his work belting out harsh vocals with mathcore act the Number Twelve Looks Like You, but in the band’s decade-long absence, he found his way into photography, film production and even politics.

Beyond fronting one of the most notable experimental hardcore bands of the 2000s, he’s managed to work on movies with Alec Baldwin, Bella Thorne and other high-profile celebrities while establishing himself in the background of political movements—most notably working with New York Congress member Alexandria Ocasio-Cortez.

Korman relates his success in so many different creative avenues to learning DIY ethics through starting his band as a teenager. Through a decade of touring, writing and managing the band, he learned what it takes to create something from the ground up and expanded that into his other interests when he dropped out of music.

Since the beginning, his motto was to “fake it until you make it.” All of his work with the Number Twelve Looks Like You—whether it was screaming, designing album covers and merchandise, managing the band, booking tours or anything else—has been learned through trial and error. From there, he took that hands-on attitude into other realms, including managing bands such as Foxy Shazam, studying how to shoot photos and working as a film producer.

“I felt like a scam artist for so long,” Korman says. “I felt like this little bandit who was getting away with murder like someone was going to catch me one day. The thing that I remember is school only teaches you to acknowledge the way people talk or the way things work, but at the end of the day with movies or photography or music, all everybody wants is something unique and something fresh. If you are delivering something to the world that is unique and what people want, that’s all that matters, and it doesn’t matter the way you get there. You just figure out how to get to your last point in any way that you need to.”

While incredibly proud of his work in music, Korman prefers to keep some distance from that scene and his creative exploration in film and photography. He explains that he does sometimes see the two sides of his work cross over with fans of the band noticing photo work with movie stars or film crew members recognizing him from the band. But he understands that they are separate industries.

One advantage is that even when people in the film industry don’t know the band, there’s a sense of respect for the effort it took for him to accomplish what he did.

“It’s too much to explain to anybody who doesn’t know anything about that world, so it’s funny to jump into being a producer on movies and seeing the transition,” Korman says. “I like to keep them very separate. But at the same time, I get a handful of people who do know about Number 12. I’ve lived two other lifetimes before getting into movies, and they’re intrigued by it. There’s a sense of respect and curiosity.”

He gets different experiences from his varying jobs, which is something he feels affected his decision to come back to music. Now that the Number Twelve Looks Like You isn’t his primary source of income, he’s able to leverage all of his ideas into the appropriate places and doesn’t see any limitations with what he’s capable of anymore.

Read more: 15 movies that are secretly emo that you can stream right now

Korman found working in the film industry a natural progression. His experience and outlook on film sets was found to be invaluable. He quickly moved from associate producing, to co-producing and is now a full producer for Yale Productions.

Leaving music behind was a difficult decision to make, but Korman knows it was the right move. He had been missing out on spending time with friends and family due to constantly being on tour and began resenting the band for that reason. Now, though, he sees what he can get out of writing music that he can’t from film or photography.

“I left music on a very bad note,” Korman says. “It was a very depressing time, and I only knew Number Twelve. I was 16 when we started and 26 when we ended, and those are some pretty important years in someone’s life. When I wanted to get back into the music industry, that was the first time I really had an appreciation for what Number Twelve were doing. It’s such a great thing that we accomplished, and I was proud of it. But I wanted to open it up again to show that appreciation.”

Read more: Here’s how to watch SXSW’s films for free while you’re at home

While the band’s return has seen them expanding their lyrics into more societal issues, part of that shakeup comes from his expansion into photography. Korman explains how he became invested in politics through Alexandria Ocasio-Cortez, the youngest Congress member in U.S. history. She was a restaurant worker and bartender before her massively inspiring political career. She happened to work at a restaurant where Jesse frequented, and the employees all knew each other as friends, which was the start of their connection.

They started by taking more artsy photos together as Ocasio-Cortez noted she hadn’t had professional photos taken of her before. A few years down the line, she got inspired by the issues relating to the Dakota Access pipeline, tapping Korman for advice on how to film as she liked the style he and photographer Joey Lawrence pulled off with their series Dudes With Cameras.

When she returned, she was fired up to take action into her own hands and run for Congress. This led to Korman helping her by taking the professional shots used in her campaign, where she went up against 10-term Congressman Joe Crowley and shocked the world by winning.

“[She’s] someone who I only knew as a friend, [and] we would fuck around with taking photos and hanging out through people we knew at the restaurant, but she had told me a lot about her knowledge on the things she was passionate about,” he explains. “I was impressed because [with] me being a band or photo guy, I was never around people who gave a shit about politics. You would figure that some punks would be like, ‘Fuck the government,’ but I never really knew anyone who cared either way about the government or any sort of policies except for her. I have a lot of friends who talk about these types of things, and they’ll share it, like it, post it or whatever, but no one actually does anything about it. She did. I thought it was crazy.” 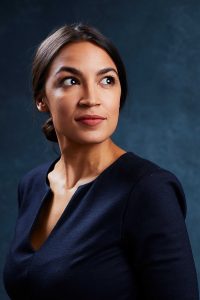 Reflecting on his work with her campaign now, Korman feels it helped open the doors to other young people to become engaged in politics. Since then, he’s aided other political campaigns through free photo and video work and branched out the band’s lyricism into covering more social issues.

Ultimately though, he’s happy to see a shift in people’s attitude that changes in politics can be done, and everyone can get involved with the rise of the internet and social media.

“With Alexandria, she really did something different than everybody else,” he stresses. “People always saw the government and politics as this establishment that you cannot infiltrate. You can’t break down the barrier and get inside because it’s a group of old white men, and things will never change. But what she did was simply ask, ‘Why can’t we?’ That right there was enough to make people realize they could see behind the curtain and that could be us.”

You can learn more about Korman’s work in film and photography here.