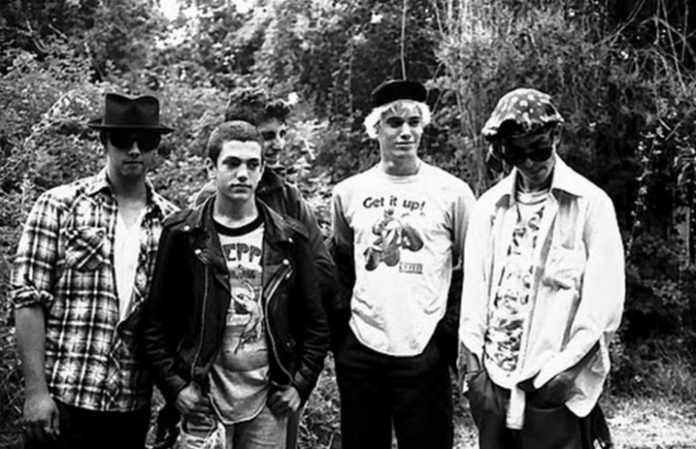 Thirty years ago, the Bay Area wasn’t synonymous with tech, astronomical rents or even pop punk. The summer of ’69 still loomed in cartoonish homage and the promise of the first wave of American hardcore punk was reduced to the embers being stoked by Maximumrocknroll fanzine. Centered around a non-profit space in Berkeley, California, a new wave was emerging, bound by community and defined by diversity. Crust, drunk punk, melodic, straight edge, noise, riot grrrl and even ska-influenced hardcore shared one stage at 924 Gilman Street.

The topic of a recently released documentary, Turn It Around: The Story Of East Bay Punk, Gilman famously launched Green Day and popular punk into the cultural lexicon, sparking a Nirvana 2.0-interest in independent music and the Bay Area. Sure, Samiam and Jawbreaker didn’t fulfill the sales projections the majors expected, but, along with compatriots Filth, Crimpshrine, J. Church, Neurosis and Fifteen, among others, they left a colorful story behind that continues to inspire.

And then there’s the outlier of outliers, a modest band formed in 1987 by four Bay Area boys playing a mix of ska, punk and hardcore. In just a few years of existence, Operation Ivy not only left a lasting impression on the punk scene, but also opened up a lane for the ska-steeped punk bands that would dominate the radio in the mid-’90s. Contextually, the Mighty Mighty Bosstones wouldn’t release their more ska-leaning debut album for another two years. Like many great punk bands, Op Ivy’s influence outlived their existence, and the band’s lone LP Energy has long been considered a classic—an infectious, certified-Platinum mashup of genres that’s part of many “starter kits.

“There's certain times where people just wouldn't like us,” frontman Jesse Michaels explains. “At times it was sort of weird, but most of the time, people liked it. We really brought a lot of the energy to the show. It's kind of a fun challenge to go into a room full of grumpy hardcore people and try to win them over. At that time period [the late-’80s], the first wave of hardcore was really sort of tired—a lot of the best bands had broken up and there were a lot of bands that were doing something a little bit more generic. It was fun to do something new in that context where everything felt a little burned out.”

Like many youthful bands operating off a cocktail of dissent, hormones and a need to be heard, the band ended up flaming out in 1989, right as they were gaining momentum and national attention. “We were kids,” Michaels says. “We had strong opinions. The opinions didn't always match up and eventually it did seem like a good idea to do different stuff. I think that dynamic, and even that conflict, was there, and it probably made the music better.”

The majority of the band pressed on in a new outfit called Downfall, before guitarist Tim Armstrong and bassist Matt Freeman formed Rancid.

Michaels continued making music and art with Big Rig, Common Rider and, most recently, Classics Of Love; and while he has performed Op Ivy tracks and collaborated with Armstrong, he says a reunion is unlikely. In an era of big-ticket reunions, Op Ivy are one of the few unicorns that haven’t been lured to the stage.

“If the offer's been on the table, I've never seen it,” Michaels answers when we ask if Coachella has prodded them to reunite. “I've been so busy doing other things that it hasn't really been on my radar.

“To be honest, I don't think about Op Ivy that much,” he admits, “but it can be a stepping stone to do other stuff. I did some songs with Matt and Tim with Rancid at a show. It was fun. It felt like there was a lot of closure in that. I don't know what the future holds, but there are no plans for any get-together.”

Throughout the conversation with Michaels, it’s difficult for this writer to determine if his lack of thought about Op Ivy’s imprint on punk is out of humility or somewhat of a coping mechanism. Along with creating visuals for the band, Michaels has also done logo work and cover art for Neurosis, Filth, and even Green Day, adorning many black leather jackets—as well as the actual skin of fans. “I was hanging out with the Voodoo Glow Skulls, and one of their roadies has an Op Ivy tattoo,” he recalls. “It kind of blew my mind. I was sort of terrified. Like, what if he changes his mind or something? I'm a little bit neurotic. I always feel like I should ask them if it's okay, even after they have the tattoo.”

Despite throngs of fans inked with his art and over a million copies of Energy sold, he’s a bit blasé when asked how he feels seeing his music and the entire Gilman scene’s verve and aesthetic mimicked today. Instead, he’s much more focused on creating new art, ironically inspired by the icons that drove his musical journey, such as Joe Strummer, Bad Brains frontman HR, Joey Ramone and David Bowie. Even when prodded with the mention that, to younger generations, Operation Ivy had the same resonance as the Clash or Stiff Little Fingers did to him, or that an MRR interview once called them the “Specials of Hardcore,” he recoils.

“I have this analogy,” he says. “After you get out of high school, you don't necessarily want to get back together with the old football team and relive the big game. It might be fun, but it would also just be really weird. Tim and I have played music together since then—I think that we have a way of writing together that's pretty successful creatively. There have been times when I've missed that, because he's so talented and I've tried to play with other people. Sometimes it's been great, but it's never been quite the same.”

Though he’s evolved from his black-and-white, hallucinatory, icon-packed illustrations into a looser, almost impressionist style of painting, punk’s influence is still paramount in his work. He mentions that much of his early art was fueled by the character-based drawings of Mark Rude and Pushead, as well as Nick Blinko from Rudimentary Peni’s work—and taking a good amount of acid.

Like punk’s own DIY look, partially influenced by the ease, accessibility and affordability of printing in only black-and-white, Michaels’ work largely drew from working sans color, opting to get different looks by manipulating and shrinking his drawings on a photocopier. For his recent collaboration with Altamont Apparel, Michaels was able to revisit that medium with a slight assist from some Photoshop tweaks. Available now online and in shops, it’s probably the closest fans will get to Michaels stepping back into Op Ivy mode.

“They said they wanted something old school—my older style,” he says of the collection’s concept. “Actually, the only reason I don't do more busy, detailed pen-and-ink stuff is because it's kind of physically painful. It hurts my shoulder to do that for hours and hours. When I was a kid, I went and saw Quadrophenia, and I was into the mod aesthetic because that's very conflated with ska in Berkeley. I just riffed on that. I like doing stuff that's sort of abrasive, so violence is always good for art. There's tons of visual imagery; you know, both mods and rockers are extremely visual cultures, so it's very style-based.”

With a large, group art show in Long Beach, California, at the end of the month, Michaels’ visual art pursuits continue. Although music is currently on hold, he holds his most recent work in as much regard as that of Operation Ivy’s.

“This might be controversial, but I actually think that the Classics Of Love record is about on par with Op Ivy,” he says. “The only problem is that [I was] 40 and my vocals just [weren't] as good as when I was 19—that's just life. I don't begrudge people for liking Op Ivy the most, because we had something special. I say that without ego. Looking at it objectively, it's got something that the other stuff doesn't. I feel lucky to have had that at all.”