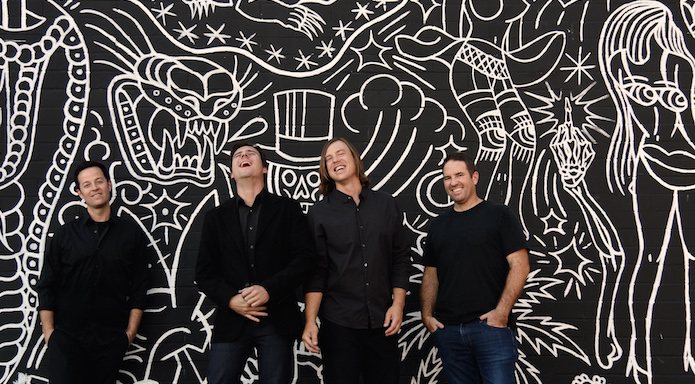 “Hi, we’re Jimmy Eat World, and you need to pay attention to us or you’ll miss it,” says frontman Jim Adkins when AP sits down with him and bassist Rick Burch at Slam Dunk Festival. The comment is tongue in cheek, but he’s not wrong: Shortly after we spoke, Jimmy Eat World played an exceptional headline set through a lightning storm. Twenty-five years after they formed and 17 after their breakthrough album Bleed American (re-released as Jimmy Eat World following 9/11), Jimmy Eat World are going harder than ever—with new records released every two to three years and shows played near-constantly. Recently, they released two new songs, “Love Never” and “Half Heart,” their first music since 2016’s Integrity Blues.

The new songs  are both deeply personal and pessimistic in the same vein as Integrity Blues. “Love Never” is fast and frantic, with lyrics as  “love ain’t some magical thing,” while “Half Heart” is softer, opening with acoustic guitar and leading into the sentiment “the moments that we have will soon be gone.”

“Adversity just seems like the place to go to write about,” Adkins says. “To me, it makes for a more interesting story. If you’re just going to write a happy song about how happy you are, I don’t really want to listen to that.”

“I wouldn’t say everything isn’t necessarily positive,” he adds. “Some of it is. It can be positive without being entirely optimistic.” When asked whether or not the songs will become part of an album, Adkins says the band are “always working on new stuff” and that the majority of what they have is “still in an unfinished, nebulous state.”

The new songs explore similar themes to those on the band’s 2013 release Damage, which they have previously called an “adult breakup record,” a deeply personal, very raw record, something that the band aren’t opposed to exploring again.

“It just depends on how you feel,” he says. “I guess you would have to take into consideration a little bit whether it feels like you’re just repeating something you’ve said already. There has to be a reason for it to exist. You could talk about a similar subject or similar theme if you feel like you’re bringing something new to the conversation. I wouldn’t rule that out, but it’s definitely not something…you’ve got to be careful. Because then you’re not pushing yourself or challenging yourself, and you’re falling back. You don’t want to regress. It’s like, ‘Do you really want to say this, or is it just because it’s a comfortable place because you’ve been there before?’ You’ve got to weigh that.”

“It’s kind of a timestamp,” Burch adds. “It’s all happening in that era, and it’s different from other eras.”

Adkins agrees. “I think that’s one of the reasons it takes us about three years in between our albums. You want to make sure that what you have is your absolute best. If you’re just trying new stuff out, after a while there’s not a life in between that.” Damage explores Adkins breakup in agonizing, honest detail and serves as a snapshot into a difficult time of his life that many of the band’s adult listeners can relate to.

Integrity Blues, the band’s most recent and most experimental album, explored similar themes while trying out brave new sounds that moved further away from anything the band had done before. “We definitely didn’t have any prejudices against trying anything. We were just like, ‘Idea? Let’s see what that does!’ Maybe it works for the song, maybe it doesn’t work so well, but it always leads to another idea,” says Adkins, with Burch adding, “It’s how we keep motivated, by exploring new avenues to keep it fresh. Learning, growing. It’s good.”

Jimmy Eat World rose to fame as early kings of the emerging second-wave emo. Clarity, their third studio album in 1999, became a staple of the genre, with its follow-up Bleed American in 2001 becoming their breakthrough album; they quickly gained mainstream success with “The Middle” and cemented their place in the rock canon. But despite their early success, JEW have never settled, constantly experimenting and keeping up the pace. Adkins says he doesn’t feel held back by his audience’s tendency toward early-2000s emo nostalgia, “but I do feel like it keeps our standards fairly high. It doesn’t make sense to put something out if we feel like we’re repeating ourselves or saying the same thing. It also doesn’t make sense to put something out we don’t really feel like is as good as the best of what you’ve done before.”

Over the last 25 years, Jimmy Eat World have done what so many bands have struggled to do; consistently and regularly put out new music and play shows in a way that doesn’t feel stale or overdone. Refusing to rely on the successes of their past, the band challenge themselves in new ways year after year, never once taking a break. They’re grateful for their success; Adkins admits that in a band, “the odds are against you” and says that they’re careful to “give ourselves enough time off where it feels like you dabble in other things. It always seems like we come back to this because it’s fun, and it’s what we like to do, still, so we do it. We try to structure things to protect the fun of it, you know? We’ve been doing this for a really long time, but we look at our opportunities, and we do what we want to do. ”

If history holds up, Jimmy Eat World’s electric Slam Dunk performance and their two new songs are set to only be the beginning of yet another era for the band. Adkins isn’t yet clear on what exactly that will entail.  “We’ll figure out how as we go. You hear something, and then you have an idea of how you respond to it, and then what you do on the top of that gives you your next set of what you’re hearing and what your response should be. That only happens by doing it. You might have an idea of the direction you want to go a little bit, but until you start going, it doesn’t really show itself.

“This whole time we haven’t really stopped,” he adds. “We’ve kept the same level of engagement this entire time. Not everyone has stuck with us the whole time; some people come and go, but that’s OK. I don’t think we’re entirely that sort of band because we do have new songs all the time.” Whether or not you’re paying attention, one thing is clear: Jimmy Eat World don’t intend on slowing down anytime soon.