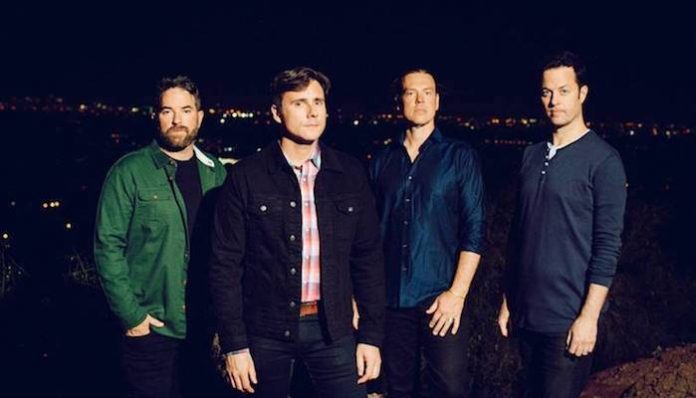 When we last left Jimmy Eat World at 2016’s Integrity Blues, frontman Jim Adkins was finding peace in solitude on the sprawling closer “Pol Roger.” “Are you alone like me?/Alone but not lonely,” he sang, finally content to let silence ring out in a modern world that’s anything but peaceful.

But a funny thing happens when you block out the noise: Your true self, the parts of your psyche locked deep inside—either by choice or coincidence—shine through. Sometimes you don’t like what that looks like, and you’re left with a decision to either continue sidestepping the difficult parts of life or confront them head-on.

On Surviving, the Arizon-based quartet’s 10th album, Adkins chases the latter. The singer, now sober for six years after seeking treatment for alcohol abuse, sings a lot about choice: to be vulnerable in the face of possible rejection. To abandon your ego. To be comfortable in your own skin while still fighting for personal growth, even when—and perhaps especially when—it’s really hard. To find the courage deep inside to break from your past and write a new future.

Produced by Justin Meldal-Johnsen (Paramore, Beck), Surviving is a more energetic counter to the moodier Integrity Blues, recalling rock sensibilities the band have largely toned down over the past decade. The first single “All The Way (Stay)” feels cut from the same cloth as the anthemic Journey classic “Any Way You Want It,” mixes syncopated guitar work and stomping drums with a soaring, trademark Jimmy chorus (along with a rip-roaring sax solo courtesy of Fitz And The Tantrums’ James King), while the six-minute “Congratulations” (featuring a guest appearance from AFI’s Davey Havok) eschews the band’s propensity for cinematic closing tracks in favor of more riff-heavy fair without losing an ounce of the epic stature. Top to bottom, it’s a classic Jimmy Eat World record—a cement-solid collection of introspective, core-cutting songs from one of the most dependable rock bands of their generation.

Just before kicking off the Surviving era with a performance on Jimmy Kimmel Live!, Adkins spoke with AP about the personal transformation he’s undergone over the past few years, how it affected Surviving and more.

When did the theme of this album begin to crystalize for you?

All of our albums are like time capsules of what’s going on…in between albums, really. For the last couple [of] years, I got really into the idea of what’s preventing me from really living. It’s not natural to question everything we’re doing. For some reason, I think we’re much more likely to try to rationalize and justify our unhappiness instead of looking at what might be behind that and [taking] action. Like I say in one of the songs, it’s the difference between surviving and really living. [You tell yourself], “Anything is better than this, but I don’t want to do anything because it’s too scary. I don’t like who I am, but at least here I know what I have. If I leave here, what’s going to happen?” It’s a really strange trick your ego, for lack of a better word, plays on you.

Hearing you say that makes me think back to “23,” where you sang, “You’ll sit alone forever if you wait for the right time/What are you hoping for?” That was a profound lyric that really resonated with a lot of people, but it seems we all go through this thing where it’s easier to feel like you have the answers than actually put them into practice.

Yeah, it’s strange how the process of songwriting breaks out things your subconscious wants to tell you. You might think you’re describing outside events and what you witness in actions from other people, but maybe it’s what your subconscious is trying to tell you is going on. No one likes to be wrong, and it’s not the default position to really present that you might be. Your ideas might be completely wrong.

How have you tried to change the trajectory?

A simple but not exactly thing is just trying to be present with everybody you come in contact with. It’s easy to go future-tripping on things—but that’s not real. You know what I mean? What’s real is what’s happening around you. It’s tricky to actually stay upset about much if you’re really focused on what you’re doing right now.

Outside of the personal self-improvement, how do you challenge yourself as a songwriter?

I can tell if an idea is good if I find myself laughing. If you’re struggling a little bit with an idea and actually following through with it, you’re on the right track. If you’re not pushing your self-perception a little bit at least, you’re not growing. The worst possible thing isn’t making something you don’t like; it’s making something that’s exactly you. It takes a minute. I think as soon as you discover what your own musical voice sounds like, you need to be challenging it.

You did some songwriting with Sam Hollander (Panic! At The Disco’s “High Hopes,” Fitz And The Tantrums’ “HandClap”) for this album. Even though those songs didn’t make the cut, was that a way to avoid stasis—to get in a room with a stranger, be vulnerable and try to approach writing from a different creative place?

I wouldn’t entirely count those songs out yet, but we didn’t end up finishing them for this record. It’s fascinating to me: I love the craft of it. Everybody approaches it a different way. Everybody has a different kind of aural tradition of how they figured it out or was taught to them. The same thing goes for people who produce records: Everybody makes records a little bit differently. When you get the chance to work with somebody else, you learn so much.

Even if they don’t work in the moment, those tricks and other ways of approaching the process can resurface later and inspire something totally unexpected.

It happens all the time when a part from an older thing ends up being cannibalized to finish the puzzle for something you’re working on. A good quarter of what I do now is old ideas that somehow seem to work now. The chorus chord progression on “All The Way,” that’s a really old idea, but for some reason, it never seemed to work no matter how we tried to do it in the past. We were working on the verse idea for “All The Way”—the sparse, stop-start thing—and we knew it had to open up more. It worked perfectly, so you should never throw anything away. You never know when it’s going to come back and help you.

“555” is sort of the curveball on this record. There are definitely elements that feel like your classic writing, but the vocal inflections on the chorus, in particular, feel very modern pop.

Since about 2015, I’ve been subjecting crowds to house music of pretty much just ’80s electro—heavily leaning on female artists like Lisa Lisa & Cult Jam and Pebbles and stuff like that. I don’t know if that plays a role in where that idea came from, but probably. [Laughs.]

Likewise, “Congratulations” isn’t your typical Jimmy closer. Another way to circumvent the easy path of another sweeping final track?

It just felt right. It might be a reaction to other albums we’ve done where we’ve had a more typical, expected closing song. There was definitely something in the back of our heads. It also doesn’t feel like the type of album that should have a song like that. “555” is the closest thing to a ballad. Everything else is very rock, mid-to-uptempo-ish. I don’t know. We just felt like it fit.

The title track of Futures, which somehow came out 15 years ago, referenced George W. Bush’s then-impending reelection. Given everything that’s happened since then, both for you personally and the world at large, how do you think your approach to writing through the political lens—on this album through songs such as “Criminal Energy” and “Congratulations”—has grown?

I’d like to think it’s become more refined and more tolerant. No one wins an argument by getting in your face and telling you how wrong you are.

That doesn’t stop people from trying!

That’s more about people trying to convince themselves they’re right rather than really establishing persuasion. I think what’s more important to me in terms of crossing over into the political spectrum is the fundamentals. I think what’s a large problem is people losing sight of the fact that we’re all people. Everyone is trying to fight for the same thing deep down. We’re all actually on the same side here, but the level of polarization…there’s a generation of people taught to hate the people on the other team. You’re a messenger from the other side with an idea? It’s [automatically] bad. There’s no debate, there’s no fleshing out—it’s just bad.

In describing Surviving, you wrote, “So many things I thought I ‘just was’ were only as true as I let them be.” Coming out the other side, who are you now?

It’s a process. It’s an ongoing process. Every day I’m trying to get closer to a sense of peace, you know? It’s not something you ever really attain. I can see why there’s people who dedicate their lives to meditating and trying to remove the self from their existence. I totally get it [and] I think I’m much more comfortable with the idea that there’s not a finish line to anything. Everything is all about incremental progress. In the past, it would have driven me nuts because I had to control everything. But now it’s just such a weight off. I don’t actually have to control anything. I can just be me now, I guess.

Jimmy Eat World’s upcoming 10th album Surviving is available this Friday, Oct. 18 with preorders here. The band also kick off a U.S. tour next month with tickets and a full list of dates here.