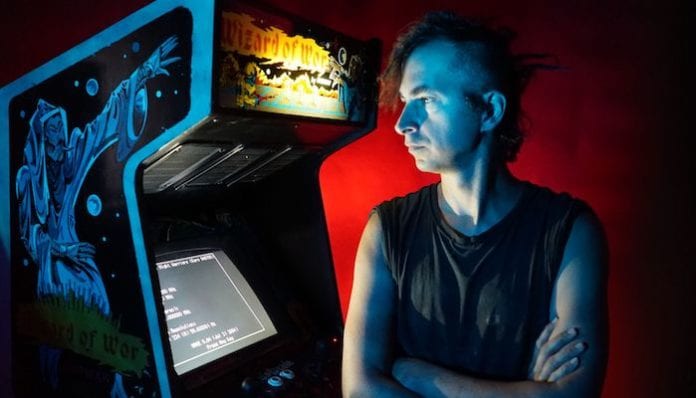 “I wanted it to sound as if Depeche Mode hired J Dilla and DJ Premier to drop loops while Frank Zappa produced—and then I came in and shit all over it.” So says James Euringer aka Little Jimmy Urine of ADD-addled electro-rockers Mindless Self Indulgence when asked to describe his new solo album under the handle Euringer, featuring cameos from folks such as Gerard Way, System Of A Down’s Serj Tankian, Grimes and Chantal Claret.

The album—slated for release Oct. 19 by Metropolis Records—is the beginning of a whole new chapter for the multi-instrumentalist and programmer. After visiting New Zealand a few times in the past, Euringer and his wife, Claret, decided to leave their Los Angeles home and move to the other side of the world.

“I totally think New Zealand is the most awesome place in the world,” he says. “It’s like a combination of San Francisco, New York City and Middle Earth. And I’ve always wanted to live in Middle Earth.”

“We loved [New Zealand] when Obama was president, but now we love it more since it synced up with the world turning to shit!,” he continues. “Awesome! We’re ahead of the curve!’”

Moving is one big step for a whole new reboot. While his previous album The Secret Cinematic Sounds Of Jimmy Urine was primarily an instrumental dive into various synth-laden idioms inspired by such classic electronic composers as Vangelis and Jean-Michel Jarre, Euringer is a whole new pint glass of piss altogether.

The album’s audio verité vibe is best described as sneaking through Urine’s diary, with diversions of everything from metaphorical politics to wild-assed cover versions to having his buddies and parents (Ma Euringer counts in Spanish on “That’s How Jimmy Gets Down” while Dad assumes the role of disappointed parent on “Two And A Half Years” and a bitter old record producer on the cover of the Doobie Brothers’ “What A Fool Believes”) helping him out on the record.

“This album is kind of a psychedelic, counterculture, avant-garde record with vocals,” he opines. “I’m calling it Euringer because I didn’t want to corrupt any of the other stuff. It’s not Cinematic Sounds. It’s not MSI, which have always been a provocative in-your-face kind of band. [The solo album] allows me to experiment with various BPM speeds, lyrics and tones and try some other avenues.

“It is very personal,” he agrees. “As much as I like being in a crazy shock-rock band, the one thing that gets lost is that people focus on the shock rock and don’t really focus on the fact that I’m a really fucking great programmer, and I’m a deconstructionist and an audio collagist.”

“I sculpt audio and make songs around it,” he continues.“And that’s the first thing that gets lost. [imitates fast-talking industry type.] ‘Awww, Jimmy! You’re crazy and the band’s crazy and they’re great and they do all this provocative amazing stuff,’ and that’s fine—that’s what Mindless are supposed to be. But nobody ever says, ‘I like how you programmed that beat and sampled that stuff backwards.’ [Laughs.] That area is what I went full hog into.”

Urine is thrilled with what his collaborators brought to the proceedings. On “If It Ain’t You Today It’ll Be You Tomorrow,” Urine and Tankian updated Rev. Martin Niemöller’s famous anti-Nazi sermon, “First They Came For The Socialists…”

“I always thought that quote was really great,” Urine says. “I wanted to write something a little bit political considering the climate, but not a whole record. Serj was in one of the most amazing politically charged bands of the last 20 years. He went through a whole bunch of lyrics and poetry that he had and screamed stuff for an hour. We had coffee, and I went home and edited [the parts] I liked. The point I’m trying to make [on the song] is that we should all stand up for fringe causes because once they’re gone, you’re next.”

Urine teams up with Claret on “Fuck Everything,” describing it as “our ex-pat song. We kind of wrote it while we were packing up our house and leaving, and then we recorded it in Wellington. She’s a really great songwriter: I’ll be sculpting a song for two months, and she’ll write one in a day. I was like, ‘Oh, my God, that was so quick! No wonder I married you!’” [Laughs.]

For “The Medicine Does Not Control Me,” Urine was trying to write a song about alcohol that wasn’t about partying or rehab. “I don’t have an addictive personality. I’m not trying to use alcohol to escape; I use it for time travel,” he explains. “I can pull myself a glass of scotch and then go watch a ton of movies that are based in New York. I can find a movie that was shot in the neighborhood I grew up—‘Oh, there’s the place I went to school. There’s the place where I used to play pinball’—immerse myself in it and then fall asleep. I don’t drink to get crazy. I think there’s a middle ground where people use liquor to get creative, but you never hear songs about it. You only hear the ones where people ‘went too far’ or they’re ‘gonna party!’”

He wanted to work with electronic/hip-hop maven Grimes because of her hands-on work ethic. “She’s DIY like a motherfucker. There aren’t a lot of ladies doing synth work, producing, mastering, editing their own videos, everything. Because she’s so talented, I wanted her to write the track and to produce me singing it, like a reverse Britney Spears thing: I’m the ingenue, and Grimes is the mastermind. We didn’t have enough time to do it that way, so I gave her some tracks and [“Medicine”] was the one she chose.”

Urine has been friends with Way back in the days when My Chemical Romance were opening for MSI in NYC. So having the 21st century polymath appear on the fast-paced “Sailor In A Life Boat” was a complete no-brainer.

“First of all,” he begins to laugh, “Gerard could have sang every song on the record! MCR did a B-side from something off Danger Days [“Zero Percent”] where the programming was drum-and-bassy, very weird and hard at the same time, like MCR being MSI.”

“This time, I figured we’d go the other way and leave it up to Gerard,” he continues.“I sent him the song, and he obviously knocked it out. The lyrics—“you’re a dogface on the frontline,” “a pilot on a ship that’s going down,” convey that you used to be a sailor in the Navy, but now you’re just some dude sitting in the middle of the fucking ocean. His vocal and lyrical style comes across to me like a Frank Miller comic book from 1981, like Sin City and stuff.”

“So the schtick is people will say, ‘Wow, it’s so deep, look how mature Jimmy is,’” he continues.“Motherfuckers, a robot wrote that song. The robot wrote the lyrics, and you’re lovin’ it! A robot wrote a song that’s so emotionally empowering it could have been written in the last 10 years. And random generators are all over the internet, you could write a whole album that way! We’re really living in a William Gibson cyberpunk reality these days.”

With all the cool collabs with women, men and machines happening on Euringer, it might be easy to ignore the elephant in the room. You know, the one with “MSI” painted in 4-foot DayGlo letters and festooned with crudely rendered drawings of penises. Urine swears that everything is good with his homies in Mindless, and the door is always open.

“That’s not the reason I made a solo album or why I moved to New Zealand. We were all on different coasts. These days, the technology exists so you don’t even have to be in the same room to make a record. MSI are a wonderful art project that never stops.”

And you’re not going to see Euringer on tour to support the new album, either. “I’m not going to tour for it because I’m gonna chill here in New Zealand for a while,” he says. “I’ll make some videos, do press and work on some top secret projects—maybe a Mindless record—down here. Incorporating New Zealand in all the stuff I’m doing is really cool and fun. I like touring with Mindless; I don’t need to put a whole new band together.”

Right now though, he’s enjoying his time in Middle Earth and keeping busy. He’s also working alongside Tankian and the animation house ShadowMachine for an English gangster cartoon called Fuktronic. Expect more, but on his terms, as he steadfastly refuses to reveal if the other projects he’s got rolling are for film, video games or elevators.

“Oh man, I wanna do stuff for elevators really bad!” he beams excitedly, in the same perverse glee that has marked every creative avenue he’s cartwheeled and silly-walked on for decades. “I can’t remember the last time I’ve gotten into an elevator that had music playing in it.” He pauses for a moment. “Damn, we gotta bring Muzak back into elevators. I’m gonna change all the Mindless songs into Muzak. The future is elevators.”

You can preorder Euringer here prior to its mid-October release date. Check out “Problematic” from the LP and the record’s artwork below.