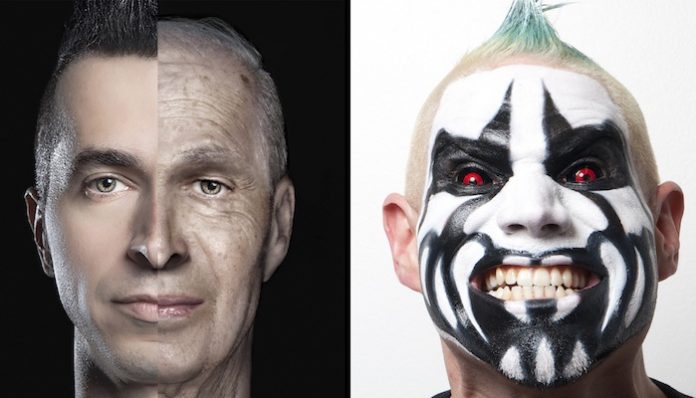 George Romero, the O.G. zombie apocalypse film director, warned us a long time ago that “When there’s no more room in hell, the dead will walk the earth.”  We can now safely assume what the planet’s reanimated corpses will be listening to. Horror-rap rocker Jamie Madrox of Twiztid and Mindless Self Indulgence frontman Little Jimmy Urine have teamed up for a positively blackened cover of Duran Duran’s “Hungry Like The Wolf.” And we’re more than happy to premiere the track prior to its release tomorrow.

“We toured with MSI back in 1999 on The Amazing Jeckel Bros Tour,” Madrox says about his friendship with Little Jimmy Urine (ne Euringer). “That’s where I originally met Jimmy and the band. Being a huge fan of Duran Duran, I’ve always wanted to cover one of their songs, and when the convo of a possible collaboration came up, I had my manager pitch him the idea. To which Jimmy responded, ‘Only if it’s ‘Hungry Like The Wolf.’’ The rest is, as they say, musical history.”

When reached for a comment, Euringer got back to AltPress with a typically annoying caps-lock communique.

“MINDLESS SELF INDULGENCE AND TWIZTID CAME UP IN THIS BUSINESS AT EXACTLY THE SAME TIME 20 YEARS AGO, SO YOU KNOW THIS COLLABORATION HAD TO HAPPEN,” he wrote. “IT WAS THE PROPHECY, YO LIKE FUCKING DUNE AND SHIT. JAMIE AND HIS TEAM REACHED OUT TO ME ABOUT GUESTING VOCALS ON THIS COVER, AND I WAS LIKE, ‘YEAH, I LOVE DURAN DURAN. PLUS, I AM THE PREMIER 1980S GUEST VOCALIST. I JUST DID ‘ROCK ME AMADEUS’ WITH FRONT LINE ASSEMBLY AND ‘WHAT A FOOL BELIEVES’ AND ‘WUTHERING HEIGHTS’ FOR MY OWN PROJECT EURINGER.

“BUT I SAID, ‘YOU HAVE TO LET ME ADD SOME PRODUCTION TO IT BECAUSE I LOVE DOING THAT TYPE OF STUFF.’ THEY WERE LIKE, ‘HELL, YEAH,’ AND I WENT TO TOWN AND HAD A BLAST WITH VOCALS, PRODUCTION AND MIXING. I AM A HUGE DURAN DURAN FAN, HAVING COVERED ‘GIRLS ON FILM’ WITH MSI. DURAN DURAN HAVE SO MANY GOOD GODDAMN SONGS. HOW CAN YOU COVER JUST ONE?”

The duo are quick to point out that the demo version for the cover was produced by the team of A Danger Within (Twiztid drummer Drayven and Jared Farrell, producer for Davey Suicide). You can feed the track to your devices beginning tomorrow (Nov. 22), right here. And if you like collecting stuff, listen up: The collab will be made available as a limited-edition seven-inch single Feb. 7, 2020. Bug the piss out of your local record store to stock it.

Since October, Twiztid—Madrox, Drayven and Monoxide—have been issuing digital singles in lieu of a full album. The band will reveal the next release tomorrow with the release of “Hungry.” Twiztid are also readying their annual Twiztmas Party at the Crofoot in Pontiac, Michigan (bring four canned-food items for the homeless and get in for free); a “New Year’s Evil” gig in Newport, Kentucky; and their own pop culture convention, Astronomicon, which takes place Feb. 7-9, 2020 at the Wyndham Garden Hotel in Sterling Heights, Michigan. Access all that action here.

Well, that’s a fuckin’ stretch, Jimmer. Go peep the lyric video below. Oh, yeah: If violent nature scenes trigger you, have a friend watch this and let them tell you about it later.