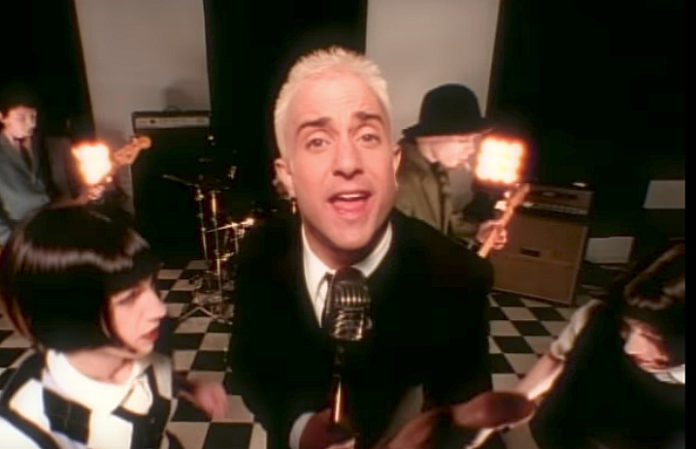 So much has changed for John Feldmann since the last time Goldfinger released an album. Since 2008’s Hello Destiny… hit stores, Feldmann has been busy launching Aussie teens to the top of the charts, writing songs on Platinum-selling albums and engineering one of the biggest pop-punk comebacks ever. He saw his daughter, Milla, enter his life, and his longtime Goldfinger bandmates exit it with varying degrees of conflict. These days, the iconic upstrokes of “Superman” are still a part of him, but they’re not his entire existence.

So when you hear “Put The Knife Away,” the first single from Goldfinger’s forthcoming The Knife, in all its double-time glory and burning urgency, you get the feeling of a passion reignited. With a lineup that finds Feldmann as the lone original member alongside new recruits Mike Herrera (MxPx) and Phil Sneed (Story of the Year), it’s clear this is not your older brother’s Goldfinger. But the band doesn’t occupy the same place in Feldmann’s life anymore. This time around, a new Goldfinger album is truly a want for the singer, not a need. At the annual Slam Dunk Festival, Feldmann chatted up AP about Goldfinger’s past, present and future—and how he deals with a very vocal sect of his band’s fanbase.

Nine years… what took so long? You’ve obviously been busy.

Holy shit, you’re right. I thought it was eight years for some reason. That’s a long fucking time. There’s so many things, right? Having kids and wanting to be around and take my kids to school … that part of being a parent is part of it. I’ve herniated a disc in my neck. I’ve had five surgeries on my knees. We toured from 1993 ‘til 2006 or 2007 relentlessly. We still hold the world record for most shows played in a touring band. There was a moment there where I felt like I was going to give it a break, but then I produced All Time Low, Sleeping With Sirens, 5 Seconds of Summer, Good Charlotte and Blink.

There’s a moment happening right now with young kids. Young kids hate their parents’ music, and their parents’ music really is Blink and Green Day. That’s what the parents grew up on, and their kids are rebelling against that. I guess pop music is still pretty DJ-driven, but that’s not what kids are listening to. There are these rappers, like XXX and Lil Uzi Vert … you go to their shows and there’s moshing and slam-dancing. If you just saw the audience, you’d think you were at a Slayer show. Kids are moshing, but there’s a disconnect onstage between the guy onstage with his shirt off aggressively rapping [and the audience]. I’m in this place where you want to—no matter where you are, you want to be culturally relevant. I don’t know if the next wave is going to be guitars, but I don’t think it’s going to be a dude with a laptop or a microphone and his shirt off.

You released “Am I Deaf” in 2013, but when did the rest of these songs take shape?

“Am I Deaf” was one of those songs that wasn’t for anyone else. It was my song. That was the first song I wrote where I knew I had to do it myself. It was the one where I thought, “Okay, maybe a new Goldfinger record can happen.” I just watched all these other groups, and there was a whole new generation of kids blending pop and what pop punk used to be. I wanted to take my kids back on the road. You know: Let’s go to England, let’s go to Australia. I toured in 1982 with 7 Seconds when I was 14. This is a life I built that I’m not ready to let go of yet. I feel the most alive when I’m onstage. My phone’s not near me, and I’m not thinking about fucking business or mortgages or life stress. I’m just in the moment.

I felt like I needed to make a statement of what my generation is: the Buzzcocks meets Bad Religion meets NOFX. I had a moment where I thought, “Am I too old for that classic NOFX/Bad Religion beat, that fast punk?” I thought maybe I’d outgrown it, but I wrote “A Million Miles” for myself. It has to be about what’s fun and what you like. If I listen to the song and it makes me happy, that’s all that matters for Goldfinger. The point isn’t trying to connect at radio. With Blink, the intent was a comeback record. We knew going into it that it was time to get on the radio and put the band back on the map where they belonged, because they’re a timeless, classic, legendary group. Not that Goldfinger isn’t, but we were always underground. I was singing about animal rights and telling Ted Nugent to fuck off. I was never trying to compete with whatever was on pop radio at the time. When we were blowing up, it was Britney Spears and Backstreet Boys, ultimately. That was never my goal; it was just to get my aggression out. “A Million Miles” came out of a spot of “I still care about music.”

You’ve produced so much pop punk over the years. Did you have to work a little harder flexing your ska and reggae muscles when it came to writing those types of songs for The Knife?

I produced the 311 album that’s about to come out, and I’m working with Sublime as well, but you’re right, it’s been about 10 years since I’ve gotten into that ska/reggae place. There are a couple songs I’d written before I really committed to making an album. I did “Liftoff” with Rome from Sublime about four years ago, and they decided not to use the song. I loved it; that’s my son’s favorite song.

“Tijuana Sunrise” was me knowing I had to tell the story of ultimately coming to a place of … my parents never supported me as a musician and never believed it was going to happen. They kind of tossed me aside and thought I was going to be some homeless drug addict. When I was 17, I left home and moved to San Diego and went to Mexico a lot, just doing a bunch of debaucherous bullshit and [going to] donkey shows and all of that. I wrote this song about how I barely survived; you know, I could have been kidnapped or murdered or overdosed. That was my real-life story of being a 17-year-old kid on the streets of Tijuana. That was the second song I wrote for the record, and I knew I wanted to write a Hang-Ups-era [Goldfinger] song.

How does Goldfinger fit in your life now?

I’ve ultimately got a career. When people ask me what I do, I’m a producer and a songwriter. I know that’s my lot in life. I started out as a kid thinking I was going to be a rock star, a guy in a band. But life takes turns and you go the direction it takes you. Look, without question, I gave Goldfinger 100 percent effort. It was what it was. At our peak we were doing 5,000 to 7,000 kids pretty much anywhere. And it was a good run! By the time Stomping Ground peaked, Charlie [Paulson, former guitarist] and I had a falling out and he quit the band during Open Your Eyes, which was our fourth album. The band had kind of shifted gears. That’s when I found the Used—Bert [McCracken] sang on Open Your Eyes—and the Used changed my life. That band turned me into the producer I am. We discovered a sound together, and we forged whatever that post-hardcore/scream sound was together. It felt like this was what I was supposed to do with my life. Ultimately, there will be no 385 shows [in a year] ever again. We’ll probably play like 30 shows this year.

Social media is overflowing with people who look at the new lineup and dismiss it as “not Goldfinger” because you’re the only original member now. How do you navigate that, or do you just not let it bother you?

Of course. I’m an emotional artist. I want everyone to be happy and everyone to like me. Anyone in a band who’s onstage is like, “Look at me! Look at me! This is my song! This is my life!” Of course you want everyone to like you. But I’m a fucking loyalist. I haven’t talked to Charlie in probably seven fucking years. I’m not not going to play music because some dude doesn’t want to. I want to play music because I love it. I fucking built this thing, and these are my songs that I’ve written. I put the band together. This is my fucking band, and ultimately I wish the best success to all those dudes. Kelly [LeMieux, former bassist] was the bassist in my metal band before Goldfinger, and we’ll play shows together. He’s in that band Buckcherry. Darrin [Pfeiffer, former drummer] and I had a falling out. I can’t … I have children and a real life. I can’t deal with negativity and people who don’t support and love each other. Maybe someday we’ll play together again, but holy fuck … We had a falling out. That’s just what happens sometimes in bands, but I’m not going to wait around. Maybe someday we’ll mend our ways, but right now there’s no fucking chance.

Ultimately, I get it. I understand. I’m a fan of music, and I get it. Either I’m going to tour with my songs, or I’m not. There’s no middle ground. Those guys don’t have interest in playing, and I do. I want to tour and play these songs. I’ve known Mike [Herrera] my whole career. He’s a better singer than me; he’s an incredible bass player. He’s got kids, and we just have similar lives with real shit. We want our kids to have good lives. We love our wives. He’s just a fucking great human.

Phil—I signed Story of the Year and he’s been one of my closest friends ever since. The idea of touring in a band … I don’t know. I think it happens to a lot of people where you’re stuck in a van for five years, 24/7, and people grow apart and it’s not fun anymore. If I’m not having fun, why would I ever do it? I have the best time ever touring with Mike and Phil. I don’t want to fucking fight about how long we play or the setlist. There’s enough stress. I don’t need the people I’m traveling with to be negative.