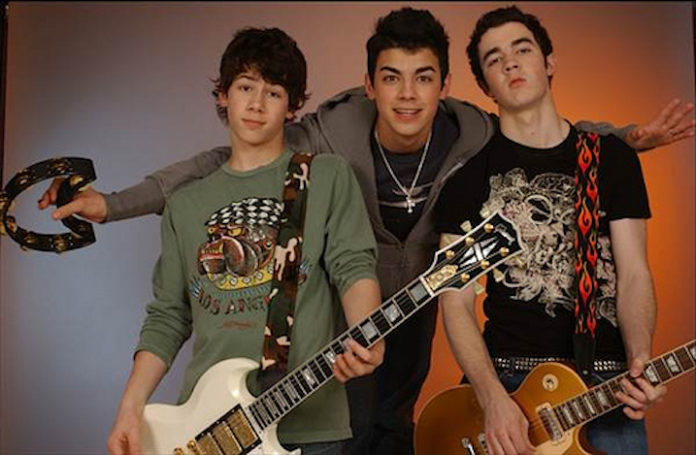 Before signing to Disney’s Hollywood Records in 2007 and becoming universally known heartthrobs ala Camp Rock, the Jonas Brothers were headed toward a life in the pop-punk scene.

The Jonas’ North Jersey upbringing and their fresh, wholesome catalogue of energetic, live-band backed songs, meant shows at underground nightclubs in New York City, slots on gigs such as The Bamboozle Festival and appearances on Fearless Music. They were marketed with a black, white and red color scheme and styled with a distressed and edgy look to fit a more pop-rock aesthetic and sound, but the band fell between attracting young adult, pop-punk fans and a younger, Radio Disney demographic.

If Disney hadn’t swooped them up when they did, the Jonas Brothers could’ve ended up doing shows at VFW halls, gracing the pages of AP or playing the Vans Warped Tour. Here’s proof:

Like most bands in 2005, they solidified themselves in the scene by perfecting their Myspace page.

[Photo by: FLICKR]
The guys personally commented on fans’ Myspace pages and responded back to messages. Daily bulletins advertised upcoming shows, television appearances and hyped up their debut album.

At the start of the band, Joe, Nick and Kevin cited Fall Out Boy, Panic! At The Disco, Switchfoot and MxPx as their musical inspirations.

[Photo by: FLICKR]
In 2005, Nick almost got arrested while attending the Nintendo Fusion Tour (featuring FOB, P!ATD and Motion City Soundtrack) with his bros.

They started out by playing in bars and clubs in the tri-state area.

Hard to believe the Jo Bros were ever playing to small crowds in venues like The Stone Pony and The Middle East and traveling in a 12 passenger van with a trailer.

In 2006, the Jonas Brothers opened for the Veronica’s first ever headlining tour.

Their small club tour circuit continued, only this time they got to headbang along to “4Ever” every night.

Before inking a deal with The Walt Disney Company, they performed a punk cover of “Yo Ho (A Pirate’s Life For Me)” at every show.

Which ended up being added to the Disneymania 4 compilation album in 2006, a year before signing to Disney’s Hollywood Records.