The former Motionless In White keyboardist is bringing the dark in his roles as entrepreneur, solo artist and inspired production designer.

When this writer began research on former Motionless In White keyboardist Josh Balz, one of the entries in the Google search field came up “Josh Balz dead.” When informed of this somewhat morbid discovery, Balz, very much alive, breaks into roaring laughter.

“That’s amazing!” he says, beaming as if he was given a major award. He then asks facetiously, “Oh, my God: Can we call the article ‘Josh Balz Is Dead?’”

That would be a hard “no.” Since leaving MIW in January 2017, Balz has been moving at light speed in many directions. Citing a weariness with touring after 10 years, Balz resigned from the band to focus on his two oddity shops The Strange And Unusual and to help his girlfriend Ryan Ashley Malarkey with her career when she won top honors in the reality-show tattoo competition Ink Master. When their relationship fell apart after five years, he kept to himself, buying and living in a disused church in the Wilkes-Barre area a few years ago (“I’m just a goth queen, know what I mean?”) and dived into projects both sonic and surreal.

Balz parlayed his MIW money in establishing The Strange And Unusual, selling everything from skeletons and taxidermy, wet specimens, as well as curious pieces both beautiful and macabre. With one location in Kingston doing well, he opened another in Philadelphia, creating bona fide destinations for enthusiasts with a taste for the arcane. Balz stocked the stores while Malarkey had her tattoo studio in the back behind the Kingston showroom. When both the stores and her career were doing well, Balz picked them over the touring grind of MIW. But when she won Ink Master, the dynamic between them shifted, and it was not good.

“One of the reasons why I left is because she kept getting offers to do all these shows—things where you film and have to go away for months at a time,” he offers. “I thought it was unfair that I was out on the road and wasn’t enjoying it. I thought, ‘Why am I out here when she has the option to do these things?’ I’ve lived my life to the fullest, the stores were doing good and it wasn’t a money issue. I said, ‘Look, let’s focus on your career,’ because we were building it together at the time, you know? I wasn’t the jealous type where it was like if she got more popular than me I’d be unhappy. My attitude was, ‘Fuck it, you get as popular as you can. Ever since the beginning, it was always my money is your money, your money is my money, and it’s our money.’”

Balz says the two are still friendly with each other, but admits to feeling the loss. “It just really sucks,” he adds. “[Partners] make it seem like ‘We have a emotional disconnect.’ No, it’s people in your ear telling you that you need to have your own adventure. Because you’re in the spotlight, you think you need a whole new life.” 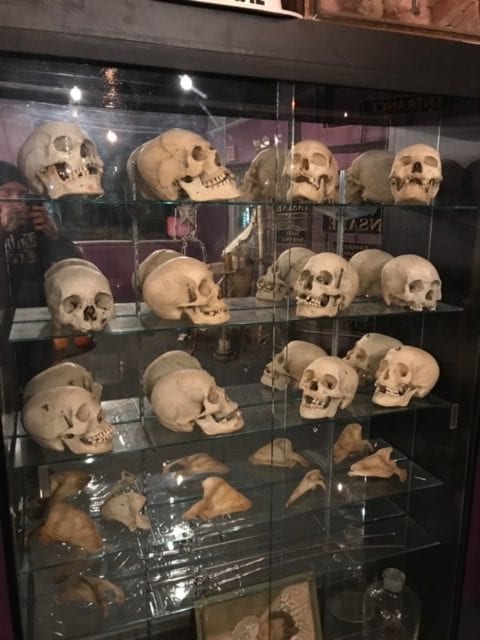 But breaking up with Malarkey rebooted Balz’s life in a big way. He began playing music again, writing a lot of melodic pieces with no real intention to put them out into the world. Right around the same time, he got word from Hot Topic that they were putting his I Heart Balz shirts back in their stores.

“I was like, ‘Holy shit, this big company still has faith in who I am and what I’m about to put me back into their stores,” he says. “It made me super happy and made me realize that I have this platform to work from, and I should rebuild myself and who I am.”

Fortunately, he didn’t have to start a band and go on tour to remind people who he was. He knew multi-instrumentalist/producer Jake Simons from his connections with the BlackCraft clothing line. They shared ideas over the net, and their first track under the name Strange Kids, “Wind Me Up,” got almost 200,000 plays with zero marketing.

“I fell out of love with music for a long time,” he says. “And honestly? The people who brought me back into it were the fans who never forgot about me. For a very long time, I thought nobody cared if I existed. But kids still connected to me as powerfully as they did when I was in Motionless.”

He’s still making music a gradual priority, refusing to take short cuts just to get something out into the world. “I’m going to put out music when I think it is ready,” he says about Strange Kids’ m.o. “If I’m going to put out songs, I don’t care if one sounds like Shania Twain and the other sounds like Cradle Of Filth. I’m going to put it out when I feel like I want to do it.” He says that out of a pool of 50 or 60 songs the two have written, he’d like to pick a half a dozen tracks and head out on a tour for limited number of days. “There are already a lot of bands saying to me that if I want to go on tour with them, just let them know,” he adds.

Thing is, Balz is always thinking. There’s an old saying that clerics and activists like to refer to: “Be the light you want to see in the world.” Well, Balz decided that he wanted to be the dark—not literally, but aesthetically. It all started as a simple desire last October: Straight edge for life, Balz just wanted someplace to go on Halloween that was cool. That ruled out sports bars with pumpkin beer and drink specials and splatter movies on the flat screens usually saved for playoff games. Welcome to Scranton, Pennsylvania.

“There was nothing in our area that was cool,” he laments. “I thought about having a Halloween party in my house, but I didn’t want people in my house with all the construction going on. I’ve seen bars in L.A., Cloak & Dagger, Bar Sin, Yes Club in New York. And I thought I’d do something in Scranton. This was my first try at doing something with big production values, but I’m not playing with a band.”

Joe Caviston, a friend who books Emo Night in the city, hooked him up with a venue, and Balz got to work. He took a bunch of artifacts from his store, borrowed lighting rigs from friends in other bands and other venues, built metal and glass cages and swings and changed the whole look of a regular bar into a goth celebration of darkness. He enlisted close friend/lighting engineer James Starosta to help him with the vision: smoke machines, red uplighting—Balz even had a girl with a grinder shooting sparks at people. 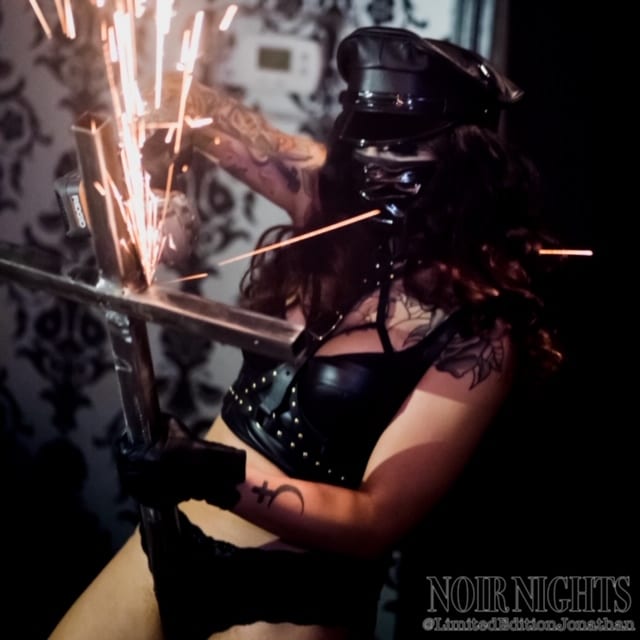 Balz became a defacto production designer, and his Noir Nights events became a thing in his hometown. He’s returning to his regular Scranton haunt (pun intended) Stage West for the fourth time, doing it again this week for Valentine’s Day. Balz was invited to bring his mise-en-scene to NYC’s Arlene’s Grocery the next day, but learned too late about the required permits to hang cages in the venue. (He says Noir Nights’ city debut is being rescheduled for later this year.)

“There’s a lot of interest in the world of dominants and submissives, but they can’t really express themselves,” he says, citing an interest in the aesthetics that have been associated with goth culture, both Wuthering Heights and Beetlejuice mindsets. In L.A. and NYC, it’s a different world. But in Northeast Pennsylvania, you know how closeted people are and how behind the times it can be.

Not even 30 and riding a trajectory that involves expansion on all of his retail, music (new songs forthcoming) and event production fronts (possibly partnering for his own club), Balz is nowhere near dead. He won’t deny the moments where he thought he was nothing, a footnote in a successful band or the boo-scary equivalent of the shopkeeper in your neighborhood convenience store. But by following his own vision, he’s been able to call his own shots and help foster the arcane culture that he’s loved for decades, in the most egoless way possible. 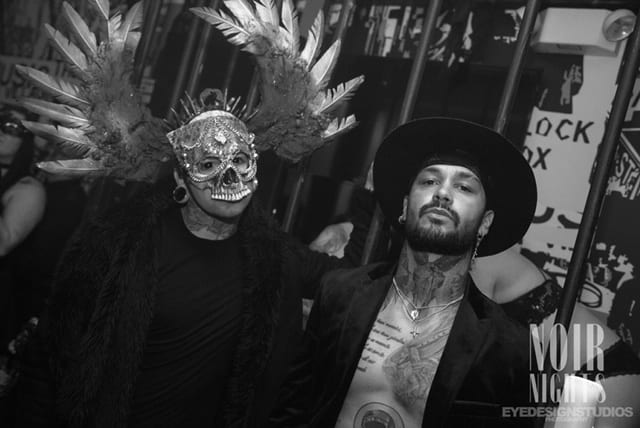 What’s next? Balz is working with a wine company to create a claret that he’s developing all the marketing for, all the way down to the look and shape of the bottle. (Never breaking ’edge, he has a close friend that’s a sommelier to oversee the actual tasting.) He makes people twice his age seem positively slacker-esque, while instilling people half as old as him with the fearlessness to follow their hearts and dreams.

“The biggest question I ask myself every day is: Who am I doing this for? And then I sit back for a second, and I figured out what makes me happy. What makes me happy is making other people happy. I love when people come into the store and they get a gift or they see something that connects with them. When I do the parties, I see people who have never been able to go out because there’s nothing like that here. They don’t want to go to bro-bars where dudes hit on chicks and roofie them and shit like that. People come to the events and they tell me, ‘Thank you for making this happen.’

“I don’t think of myself as important or whatever,” he says with full transparency. “I went into therapy, and I was told that I was doing great things. [imitates therapist] ‘You never tell yourself you’re good enough. You need to look in the mirror and tell yourself that you’re great, that you’re doing good things for people all around you. You’re very powerful, and you don’t realize it.’” He begins to laugh. “And I’m like, ‘That’s so weird!’”