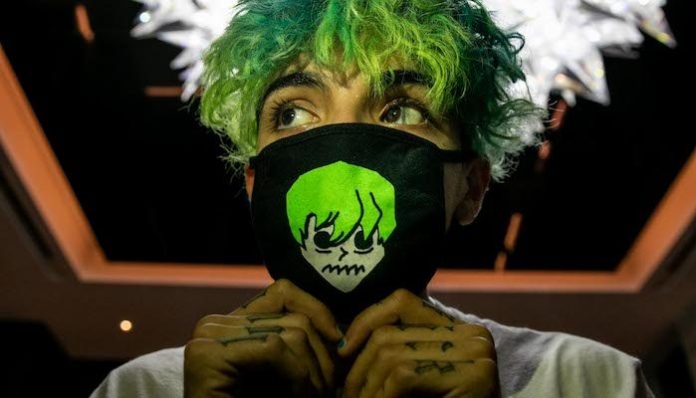 Teen angst emerged, and it seemed like the world was suddenly falling apart in all directions for Mark Kiessling. In times of unspeakable distress, fear and despair, Kiessling found his getaway in Chicago’s drug culture and fell into a rut of addiction and depression. In need of a fresh start, he abandoned his vices and moved to Los Angeles to pursue music under the moniker JUMEX.

Raised on a steady diet of punk, post-hardcore and emo, JUMEX planted his musical roots when he joined a punk band in high school. As he immersed himself in acts such as Operation Ivy and later a slew of Warped Tour bands, his love for anime also grew, playing a major role in his formative years.

JUMEX made his most recent pilgrimage to Japan and wrapped up his first-ever tour, performing alongside Crossfaith, Vein and Injury Reserve. Having the opportunity to experience the country firsthand, he wasn’t disappointed when he first stepped foot in Japan.

“This is exactly what I expected,” he says. “Everything’s so cool and unique. But it’s also crazy how calm everybody is and how chill everything is.”

Japanese metalcore band Crossfaith, who lead the annual Nitropolis tour in Japan, invited JUMEX on tour. In between exploring bustling cities and indulging in dumplings and tofu fish eggs, JUMEX was graced with overwhelming joy. He saw a positive groundswell from the crowd despite the language barrier.

“Seeing the audience connect and sing my lyrics is really cool,” he says. “It’s such a life high. It’s just gonna get better from here.”

The 19-year-old musician doesn’t shy away from his fascination with anime. He wears his heart on his sleeve with his vibrant, anime-inspired aesthetic that also appears on his cartoonish logo. It makes sense that anime adds extra flair to his identity as an artist, emulating the melodrama in the likes of Ouran High School Host Club to his sound while guising in the gothic darkness of Tokyo Ghoul. Beyond his favorite shows, JUMEX also draws inspiration from anime opening tracks, especially the intense, upbeat energy.

“Definitely inspired by the image and the music because anime theme songs have crazy breaks to it,” he says. “I really like how they just all of a sudden build up so fast. That’s what I try to put in my music.”

His latest EP, LONER, is a heady collection of his past experiences surrounding mental health and addiction, revealing his transition from Chicago to Los Angeles. Alongside that, he also unleashed a series of music videos, with “TRAPPED” directed by Taco Bennett from Odd Future. Each video details its own story and represents a timeline of his past.

“‘LONER’ was about my past life in Chicago before I came to L.A., so that’s like escaping the mentality [of] being trapped in Chicago with the drugs, and it’s never good to be around drugs,” he explains. “And also, the song ‘TRAPPED’ goes along with being stuck in Chicago mentally when I was 17, stuck in school trying to make music. I felt trapped in a system, basically.”

With plans to release more music and aspirations to launch a clothing line, JUMEX won’t be stopping anytime soon.

“Get ready for my music—I have like 400 unreleased songs, so be prepared,” he says.

LONER is out now, and you can check it out here. You can check out the latest video from the EP, “ALIVE IN MY COFFIN,” below.