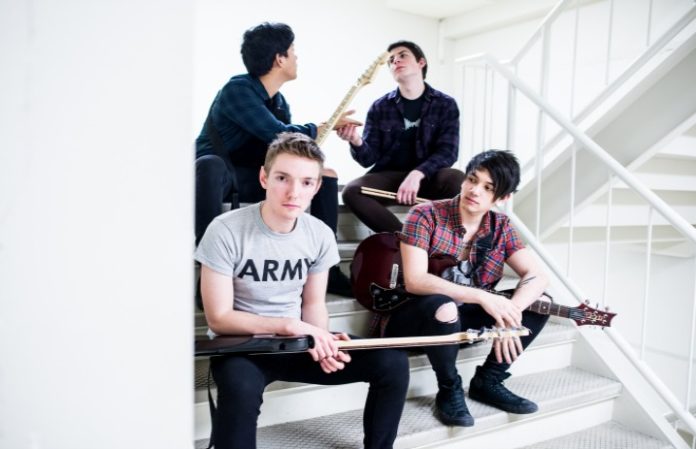 Kellin Quinn’s new record label, Pretty Rad Records, signed on its first band. Chase Your Words, an up and coming pop-punk band from Vancouver, are premiering their new song “Keep In Mind” from their EP Here to Stay exclusively with AltPress.

“Chase Your Words brings a youthfulness I think music has been missing within the scene,” says Sleeping With Sirens' frontman Quinn. “Their EP is just stacked full of hooks and melodies that'll have you repeating the chorus on first listen. CYW, to me, is the band you need to keep your eyes on, because they're poised to be the next big thing.”

Lead vocalist and guitarist Chris Siglos said they thought it was “surreal” when Quinn contacted them about signing them onto his new label. They worked on their EP with Cameron Mizell of Chango Studios in Phoenix, and Quinn also flew in to give the band constructive criticism. Afterwards, the band flew to Los Angeles to shoot a music video with Sean Garcia and participate in a photo shoot with Grizzlee Martin.

“Throughout 2016, we've met up with Kellin multiple times at Warped tour to hang out, chill, watch a bunch of awesome bands, and meet new people through him, and he’s given us a big boost on social media,” says Siglo. “We definitely consider Kellin a mentor, and we’re so grateful for everything he’s done and continues to do. He’s really inspired us to keep fighting and fulfil our dreams!”

Here To Stay is set to be released February 24. Check out the new video “Keep In Mind” below.