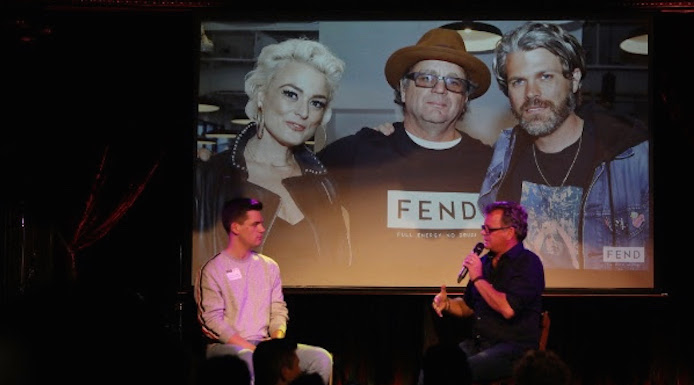 It’s May 23 and on East 32nd Street, between Madison and Park Avenues in New York City, the Cutting Room is hosting an exclusive event manned by Vans Warped Tour founder Kevin Lyman.

While Lyman is most famous for establishing Warped back in 1995 and successfully running it all the way through 2018, the country’s longest-running touring music festival is not why he’s here tonight. Sure, everyone has gathered to support him and be part of his post-Warped future because the festival means so much to so many people, but tonight the focus is on the launch of the FEND: Full Energy No Drugs anti-opioid initiative.

If you’ve been to Warped before, you’ll know that part of the festival experience is discovering the work of  various nonprofits and philanthropic campaigns, such as Truth’s anti-tobacco movement. The presence of these groups is a result of Lyman’s dedication to making the world a better place, and now that the final year of Warped is upon us, he’s taking that mission on full-time with FEND. “Traveling the country the last few years,” Lyman starts with a sigh, “the stories always drift to opioids. I’ve always been the person [to] jump in and try [to help]…the FEND app is educational. It’s always about education to me. There’s just no education out there; we’re just starting to play catch-up now on the opioid epidemic and crisis.”

Citing poor pharmaceutical and medical practices as the catalysts for what we now call the opioid epidemic, Lyman believes that bringing knowledge to the youth and creating youth engagement is key to relieving the nation of the crisis. According to him, it all starts with gamification. “Everyone likes to play a game now,” he explains. “[It’s about] rewarding people and fans of Warped Tour for downloading the app and following along. The bands have all been signing up, whether it’s Black Veil Brides or Senses Fail. Everyone’s signing up saying, ‘Let’s help out.’” Those who download and participate in the FEND app will earn rewards and prizes such as Warped Tour tickets, free swag and even private sets with your favorite band. The ultimate prize? A house show produced by the Warped founder himself. “The zip code that signs up the most people will get a concert produced by me in the fall, at their backyard or house or school.”

Historically, youth have consistently played a major role in cultural revolutions. Most recently, we have seen this happen with new movements concerning gun control. It is at points such as these where youth culture and politics begin to converge, and it’s about to happen with FEND thanks to former Governor of New York, David Paterson.

Punk and politics have rarely been friends, but a new bridge has formed between Lyman and the 55th Governor of New York so that they may work together to ignite change for millenials. “I met [Lyman] on a conference call a few weeks ago and met him in person tonight,” Gov. Paterson says. “He told me about the concerts that he does all over the country, and it’s fascinating; the idea that you can use entertainment and fashion and technology to bring a message to younger people to beware of this.”

The former governor took a more traditional path several years ago when he worked tirelessly to reform the state’s drug laws through legislature. After a decade or so of effort, he and his party were finally able to repeal the Rockefeller Drug Laws, which were the most punitive drug laws in the country. Replacing severe and mandatory punishment with case-by-case treatment was Gov. Paterson’s biggest accomplishment in office. Now that he’s out of office, however, it’s time for a more creative approach—and that’s where FEND comes in.

“You can get a message out with technology so quickly,” he surmises. “Even in despotic countries like Egypt, they organized an uprising just through their cellphones. We should be able to get the message out [about opioids] just through the modern technology and all the avenues to younger people, and combine it with something that’s interesting to them. Young entrepreneurs can take advantage of some of the offers of gifts and free swag to get people to participate and pass the message of this deadly disease.”

Beyond education and incentivization lies perhaps the most important element of the FEND campaign: understanding. “There should be absolutely no remorse about coming forward with a prescription-related addiction,” the former governor says, “because it’s not your fault in the first place. We’re not going to blame you if you don’t respond right away, but you’re only hurting yourself. Come forward. People understand this. No one is going to hold you up as some kind of negative person, when really you just had a surgery or some procedure where you needed these drugs and they were overprescribed—probably by people who were as ignorant of the possible outcome as you were.”

It is this combination of active engagement and empathy that Lyman hopes will grow the FEND movement. “My hope for this project is [for it] to become like what the Truth movement was for smoking,” he says. “That this becomes a nationwide movement [with] lots of people involved, everyone working toward saving lives.” Lyman has aspirations that FEND will be a white-label app that will be used by various sectors of the entertainment industry, from music to sports. Of course, he will never forget the main demographic that helped him build his foundation in the first place: “This is a moment in time where we all need to stand for something, and I see that in the Warped kids.”