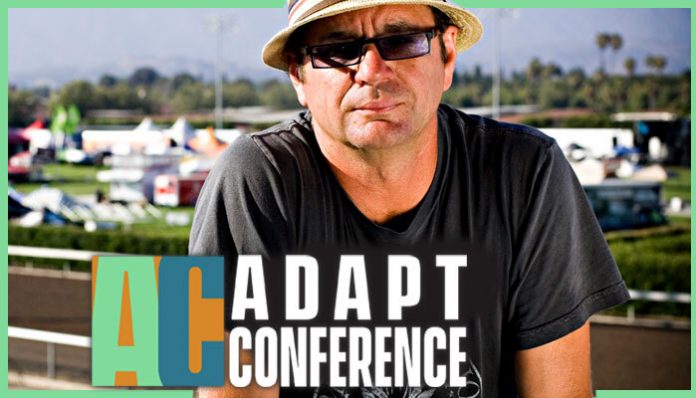 Kevin Lyman hopes he can wake up one day and see the music industry and touring world return to what it once was before COVID-19 hit. But, he admits, that’s likely never going to happen.

What the creative mind behind Vans Warped Tour says can happen, however, is the exchange of ideas and the expansion of networking opportunities within the industry.

And that’s exactly what Lyman and Dynamic Talent International CEO Trevor Swenson are aiming to accomplish with the virtual ADAPT Conference: a one-day event geared toward bringing an industry, which Lyman says is seemingly always in “competition” with itself, together.

“In March, when this started, the rug got pulled out [from under] so many people,” Lyman says. “There was a lot of panic in the business. There was a lot of fear in the business. And how do you overcome that fear? It’s going to show that it takes cooperation to make this business go forward. There’s no one on their high horse in this business anymore. Everyone got knocked off.”

The conference, which Lyman hopes feels more like a seminar, features sessions on how artists can break through during the pandemic, how drive-in concerts and livestream events could be the future of touring and how decision-makers can address the lack of diversity in the touring industry, among other topics. The event features several “teachers,” ranging from Good Charlotte vocalist and Veeps CEO Joel Madden to Twitch’s Director of Premium Music Content Brian Rucker to recording artist Tessa Violet.

Outside of its learning opportunities, ADAPT offers a 50% discount on tickets, normally $149, for those who may have lost their jobs during the pandemic. The discount puts attendees’ names on an “open to work” database, hopefully bringing them closer to employment.

Read more: Wendy’s has some things to say about pop-punk and the new MGK album

“Everybody right now is down,” Swenson says. “So why not get all the people that are thriving [to teach]? We’re getting the teachers that are helping people make money. And now, you can come and see how they’re doing it.”

Alternative Press caught up with Swenson and Lyman about the importance of bringing the industry together, how the conference came to be and what they hope the experience can mean for young people trying to navigate the music industry during its most turbulent period.

Let’s take it back to when this all began. Obviously, the ADAPT Conference is a direct response to those working, or struggling to work, through the pandemic. At what point did the two of you join forces and start considering this as a real possibility?

KEVIN LYMAN: We were talking about it in [Trevor’s] backyard, about the direction of the business. Luckily, for the first summer in 28 years, I didn’t have a big summer plan. So I’ve been talking to a lot of people, bouncing ideas off [them]. Trevor’s been doing his thing, talking to a lot of people. We thought there were people doing some pretty cool stuff, but there seemed to be a lot of people paralyzed, on the side of the fence, not really jumping in with their artists.

TREVOR SWENSON: We just realized that there was definitely a need for teaching people about other means of income because it’s hard right now.

LYMAN: And we found people that are willing to teach other people and give them tips, maybe on some of the roadblocks that they had hit in their business and then how they got around them or over them, and are willing to send people home with some actual tools to work through this… And so I just think it’s gonna be a good teaching lesson. I think we’ve connected with a lot of students and young people across the country. From looking at the ticket purchases, to be honest, I was looking at it as we’d get more industry people. But what we’re seeing [is] a lot of young people taking interest in it. [They’re] gonna be the future of the business anyhow.

Do you think the best way for others to learn right now is through those who are experiencing all of this themselves?

LYMAN: Absolutely. It’s interesting, too, because we’re having Noelle Scaggs and Jerome Crooks talking about their Diversify The Stage program. Everyone rushes in and goes, “We have to fix this problem.” It’s an inherent problem, but it doesn’t get fixed overnight. When I saw that it was Jerome Crooks behind it, Jerome was the first tour manager at Warped Tour. In 1996, he came out here. So I know that they’re into it for the long haul. They’re not just saying, “Oh, we can fix this overnight.” It’s going to take some education, tools and support to do this.

SWENSON: Getting these people that are teaching these classes is incredible because there’s such a niche amount of people right now that are actually thriving in the music world. Everybody right now is down. So why not get all the people that are thriving? We’re getting the teachers that are helping people make money. And now, you can come and see how they’re doing it. They’re gonna tell you exactly what they’re doing.

Bouncing off that, instead of using the term “panelists,” you refer to those teaching ADAPT’s sessions as just that: teachers. Can you describe the idea behind this?

LYMAN: I’m a full-time professor at University of Southern California now. I teach five classes there. When we approached the teachers, we said, “We’re looking for people who want to teach in a classroom, almost a classroom setting.” Presenting powerpoints and guidelines and giving people notes so they can go back and say, “Maybe I can implement some of this stuff into my own business.” So as this comes down to a micro or microcosm of society as a whole, we as an industry have to pull together and not be in competition, as we always seem to be all in competition, and work together to bring it back.

SWENSON: We’re definitely music-focused on this. You can tell that we’ve got the big labels coming in with Elektra, and we’re talking about the label aspects of things too, which could help even new indie labels develop their product and get this stuff up. Because the old model isn’t working anymore. It’s not, “Set a release date, set a tour, release the record, go tour.” It’s different now… We have the Director of Premium Content [Brian Rucker] from Twitch teaching one of these classes. You can go on there and create your own show for comedians, [or] you can create your own show for dance. There’s so many different things you could learn from this just by setting up content creation and then generating revenue off YouTube or Twitch or Veeps or whatever streaming service you use. There’s so much more opportunity on this to learn how to do that stuff.

There are some pretty exciting names joining you: Mike Easterlin, Tessa Violet, Joel Madden. Were most teachers excited to share some of the insight they’ve learned over the last seven months?

LYMAN: I think some people are like, “Wow, you want me to teach?” There were a couple of people that were like, “I haven’t ever really sat on one of those big panels, but you want me to come in and teach?” There’s a couple that I had come into my classes at USC to pre-teach just to get them more comfortable in the setting. And they did great.

SWENSON: I think it’s interesting that we have more teachers than we allotted for. Like, we were originally only going to have maybe one teacher per class. And now it turns into all these people that are doing well [and] want to teach it together. So you’re not getting just one point of view. You’re getting multiples in these classes of different aspects of how they’re doing different things in different markets or different styles.

And there’s no better way to learn from others than to network. When did this idea for the “open to work” database begin to take shape?

SWENSON: We need to give Kat [Cody] full credit on that because Kat came up with that idea. We were trying to figure out a way because we understand that $149 for an unemployed person is crazy expensive. We just wanted to make sure we’re not going to give the information away for free but at a 50% discount. And then what she thought of was, “Why not have a live job board?” So if you buy a ticket to the show, all these attendees that are going to be there are looking for jobs. People that might be hiring or even the speakers might want to increase their staff. Here’s a live job board that costs the exact same amount with a ticket of 50% off that it would list yourself on Monster.com or something like that.

I’m also curious as to how much ground you aim to cover with this conference and what your ultimate goal is in terms of the number of sessions you’re offering?

LYMAN: It’s just to move things forward. It almost felt like an obligation in some way. If we’re observing something and seeing [the effects of the pandemic], why not give it a shot and see if we can pull it together? It is painful every day in this business to talk to people. There are a lot of people out of work. Trevor has worked a long time. I’ve been at it for 40 years. The pain that people are going through right now, it hurts. It’s also a sense of keeping busy. You want to keep busy. A lot of people are talking in our business like, “I’m working harder than ever. I don’t know if I’m getting anything done, but I’m working harder than ever…” I hope you wake up one day, and it’s all back to what it was, but for right now, I think people have to figure it out, and then you can carve out a little niche for yourself in this business in a different way.

Like you said, attendees will be joining you at ADAPT for a variety of reasons. What do you hope the biggest takeaway for them is?

SWENSON: To not sound as cheesy as possible, because this is actually a real statement, I think hope and inspiration [drive people] to go and try something new. Hopefully, people learn something new out of this thing to where it’s going to drive them to want to press for the industry because there’s a lot of people that are going to pivot away from the industry. People are gonna go find different jobs in different industries. So maybe this will inspire people to create new revenue sources in this industry and maybe think of something new. In times of turmoil, innovation is usually the best thing that happens, so hopefully people will be innovative after this.