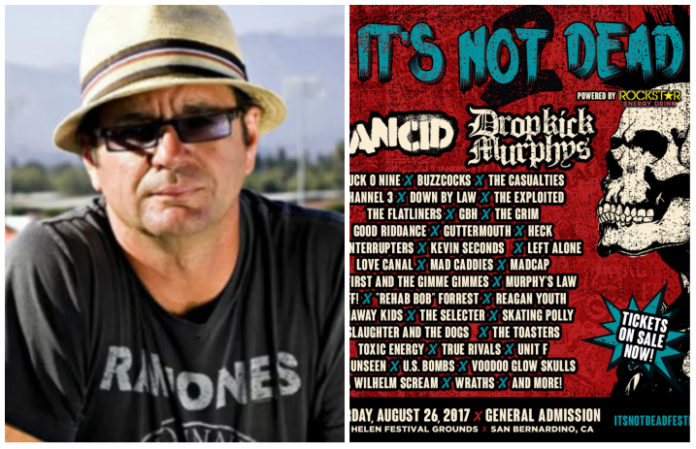 In October 2015, Warped Tour founder/majordomo Kevin Lyman put together a one-day festival called It’s Not Dead, which, according to both young listeners and long-in-the-toof poonks, was a dramatic departure from the summer fare Lyman is known for compiling. Yet the 20,000 rockin’ faithful who piled into the (then-called) San Manuel Amphitheatre in San Bernardino, California, were there to give credence to the event’s name.

Feeling buoyed by the psychic success of 2015’s launch, Lyman has put together the second version of IND, taking place Aug. 26 at the (now-called) Glen Helen Amphitheater, for another iteration, anchored by current tourmates/bona fide American punk icons Rancid and Dropkick Murphys. Lyman talked to Jason Pettigrew about coming to his senses — that is, his personal sense of punk rock aesthetics and the sense that now more than ever, the planet needs more punk attitude than ever before.

First off: Why a punk rock fest?
For me, when I did the first It’s Not Dead festival, I think I had to do it for my own soul. I needed to stay connected to where I came from. Usually I’m trying to figure out what another generation is interested in and what they’ve done, so when I originally put IND together, I needed something to remind myself why I did this. I can go out [on Warped] and see kids singing along to I Prevail or Pierce The Veil and they are connecting to those bands the way Bad Religion, Pennywise and NOFX connected to me and what drove me to want to be around music my whole life. It’s Not Dead was something that meant to refresh myself. There was no real business plan to it: It was looked at as something that was lucky to break even, and the potential to lose money was something acceptable. It was something I wanted to do for myself, and in that moment, there were 20,000 other people that wanted to connect in the same way.

You ended up with 20,000 people and a lineup of 35 bands. How did you make that work?
The first show was very successful because everyone took a step back to move forward, and that is something that punk rock was always about. I think sometimes [the community] is lacking that. Are older bands supporting the newer bands, and where the scene is going? Everybody took a step back from their own personal interests that day and put on an amazing show. Pennywise, NOFX, Bad Religion and Descendents individually can make more money on their own individual shows in Los Angeles, but they all got together to make that show happen.

The one thing was that I wanted Rancid to play that show. For whatever reason, they couldn’t play. But Tim [Armstrong] came out and played in Devils Brigade and with the Interrupters. He told me if I ever decided to do this again, he’d love to be on it. Rancid and Dropkick Murphys are touring together now, and they’re ending their tour in California. So they reached out, so now we’re doing this festival again. We also booked a completely new lineup. The only band that’s returning are the Interrupters because I believe they are the new voice of punk rock. If there’s any band that’s going to step up and take the lead like bands did 20, 30 years ago, they could be that band, and that’s why I invited them back.

Read more: GALLERY: The best from Rancid and Dropkick Murphys’ epic From Boston To Berkeley Tour

What can you say about the crowds?
Some of the younger bands wanted to be on the bill, like the Flatliners. I also noticed a lot of younger people at that first show: There were, like, three generations walking around the venue. There were Mom and Dad our age, an older son in his late 20s who had a young child he brought to the show. I also saw a lot of teenagers who came to learn the history of punk. I didn’t feel obligated to go on a “nostalgia trip” this time because I’ve seen a lot of good new punk bands, and I think we can ingrain them into this kind of festival.

Lisa Johnson was a big influence. She built that Punk’s Well Read tent [at Warped]: Now we’ve got a lot of the artists who performed at the first one showing up this time, not to perform but to do book signings and talks. They’re coming because they want to come to the show.

IND did jumpstart that sense of community, in terms of a continuum of punk rock. There’s a classic quote from Rancid’s Lars Frederiksen that posits “It doesn’t matter when you get into punk rock; it matters that you do.”
That’s kinda what I felt. By unifying everyone together, we have that sense of community and to show how strong it is. I think we were all looking for that like-mindedness, but we’re all focused on our jobs, careers, some of us the needs of family and life paths. By putting IND together, it did make people think, “I want to go back to that community that was such a big part of my life.” Like I said, I wasn’t doing it for any kind of financial success—it was all about the emotional rejuvenation.

The current state of our government reminds many older fans of how punk rock got them through the Reagan administration.
I’ve been traveling on Warped for two months now, and you do feel a genuine malaise over the whole country. Maybe we need more of these rallying points in our community right now, because the general feeling is where are we? What’s going to happen? There’s an undertone to society that something’s going on, but we can’t pinpoint it. It’s a lot of work to make this event happen, but if we—as a community—can re-spark another group of young people into punk rock, we’ll be good.

How big is that community? What kind of stats can you share about the first IND fest?
We had people come from 48 states and nine countries. We had people from Europe, Australia and Mexico. I’m thinking that feeling I had was much greater than myself. There are a lot more punk-rock festivals all over the world now, so I don’t think we’ll see that much traveling now. It’s like being a teenager: You’re all alone and you feel whatever problems you have are yours and only yours. And then you attend an event and you find there’s more people out there like you than you thought. It’s interesting to show where the roots come from. ALT

You can get tickets to the It’s Not Dead fest right here.