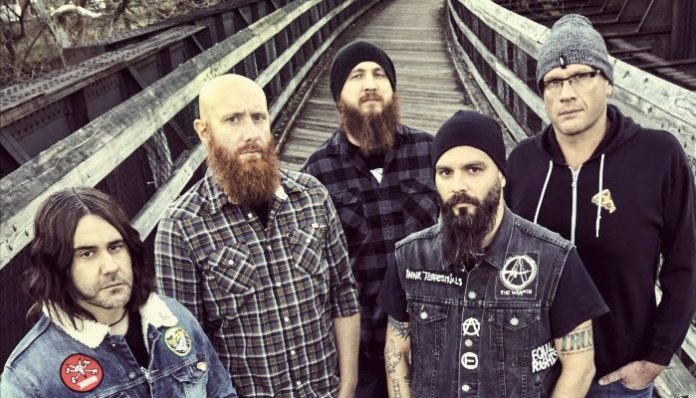 Killswitch Engage are gearing up for the release of their upcoming eighth full-length album, Atonement, but before then, they’re sharing a new track for a good cause.

The new single, “I Am Broken Too,” brings awareness of mental health issues to the forefront of the song, which is something vocalist Jesse Leach explains was extremely personal for him to write about.

“It’s about someone that I love dearly who had a breakdown, and it was somebody who was living a ‘normal life.’ On paper, you would look at this person and think he’s got it made; he’s doing great.

“That person would conceal those issues and drink it all away or numb it in some sort of way,” Leach says. “When it finally came to a head, I felt inspired to write this song because I wanted them to know that they aren’t alone.”

The band are donating a portion of the proceeds from the track to Hope For The Day, a nonprofit organization dedicated to bringing outreach and education to mental health awareness.

The vocalist believes the song can act as a uniting force for people struggling with mental health problems and encourage them to speak up and be open with others about their issues.

“That song is all about what I think Hope For The Day stands for, and this issue of mental health is becoming a much more discussed issue when you see people killing themselves, celebrities or artists or musicians,” Leach shares. “It’s really prevalent in our community.

“It was a perfect way for me to write a song that isn’t just an anthem but can raise awareness and connect with the listener and make people feel less alone in this world if they’re dealing with mental health issues,” he continues.

While Leach has always been open about his own struggles with anxiety and depression, he still finds it difficult to face these topics at times, particularly in his songwriting.

Despite that, he believes it’s worth being honest about that part of his life in order to truly connect with listeners who are walking the same path he is.

“It’s very difficult, and in fact, when the song was done and I listen to it, there has not been a time where I listen and haven’t had tears in my eyes,” Leach says. “I think it’s necessary because if you want to put out something that is going to make a difference and have some power to it, it has to be genuine and come from a real place.

“A lot of the music I write comes from the darker part of my brain and part of my soul, but I think that’s therapeutic and why people love heavy and aggressive music,” he elaborates.

Leach has previously worked with Hope For The Day in a variety of different ways and fully backs what they stand for as an organization.

The vocalist says after co-hosting his first event with the organization and seeing people having meaningful discussions about their experience with mental health issues, he knew he needed to continue to provide his support.

“I felt a real obligation because that helped me save my life when I was younger,” he reveals. “When someone recognized that it wasn’t just a fleeting emotion. People would tell me, ‘Oh, you’re just being sad. It’s going to go away,’ but I told them it’s something deeper. I feel like I’m going crazy.

“There was this moment where I connected and heard the language that was used that I realized ‘it’s OK to not be OK’ was the phrase that struck me. I thought that was beautiful and so simple and profound. That was what got me hooked and made me realize it was something I needed to do.”

While there are many things that can be done to lessen the stigma around mental health, Leach says he believes the most important thing is to have discussions to make people feel less alone.

He stresses the importance of being open and honest with the people around you in trying times and how much that can truly affect someone’s life.

“When I was younger, I didn’t have a language for it, and I didn’t have people around me talking about it or bringing it to light by saying words like depression or anxiety or bipolar,” Leach says. “It was not talked about.

“I’ve lost people to suicide, and you didn’t see it coming because they weren’t talking about it. [It’s] something as simple as telling someone you’re not doing OK and having a discussion about it. As simple as that sounds, it’s a game-changer.”

You can check out Killswitch Engage’s latest track, “I Am Broken Too,” below. Head here to learn more about Hope For The Day or donate to the organization.