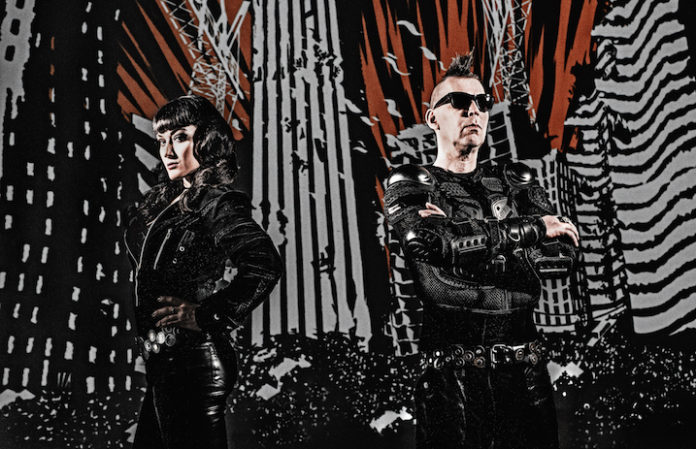 Antarctica-based KMFDM are exclusively streaming their new album HELL YEAH with Alternative Press. The band say it’s their “past and future colliding,” with a bold sound that fans will love.

“We have been delivering the Ultra heavy beat to audiences around the globe since 1984! With our new album HELL YEAH the past and future collide creating a potent brew brimming with excitement,” Lucia Cifarelli explains.

“For the uninitiated, KMFDM is designed to get you on your feet, open your mind and let your freak flag fly. In order to live the full experience and get your head done in by us,  buy a ticket to one or more shows of the upcoming US tour and prepare to become addicted to the unparalleled KMFDM!”

You can hear HELL YEAH right now below, and preorder it here:

And read the Q&A behind the album with Sascha Konietzko below:

Your music is known for sometimes incorporating political lyrics. Has the current political climate made an impact on the new record and its lyrics? If so, how?
Yes, KMFDM are not known as a band that sings about love and puppies. The “message” KMFDM delivers since the early days, the project was founded in 1984, is one about awareness, asking questions that sometimes may be painful to ask, to not blindly follow the leader, to think for oneself. That said, every political climate at any time since our inception has influenced KMFDM, this is not a thing about the U.S. (we're mostly Europeans living in Europe nowadays) but about the entire world and the dire developments we see in some places. We are artists and as such, mirrors of our time.

What can fans expect from HELL YEAH?
HELL YEAH was, in part, the result of a big overhaul that wasn't necessarily brought on on purpose; it happened. The few people that've heard the album so far are commenting on the level of innovation, both sonically and musically. KMFDM's fans have an exciting time ahead!

How do you feel you’ve grown with this album?
We've rejuvenated in a sense. The average age of all people involved has dropped by about perhaps a decade.

Who are some of your favorite industrial rock artists right now?
3TEETH, YOUTH CODE… but we don't necessarily listen to much new music when we're in the process of making an album/preparing for touring.

Ultimately, what do you hope fans and new-time listeners get from your new album? What message?
To become more kind and understanding towards other people? To have a great time listening/moshing/driving along whilst cranking it to 12!

Plus, you can catch KMFDM on tour this fall. Check out the list of cities and dates below!

What are your thoughts on KMFDM's new album? Let us know in the comments below!