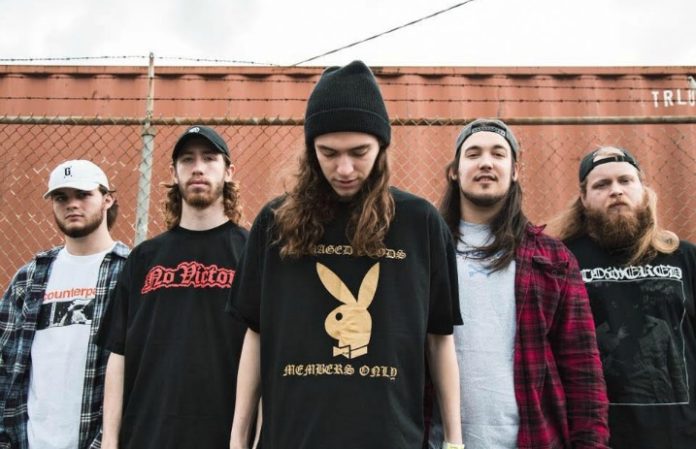 Kentucky hardcore quintet Knocked Loose release their debut album Laugh Tracks on Pure Noise Records this Friday and Alternative Press is proud to bring you the exclusive first listen. The album (following their 2014 demo EP Pop Culture) explores the growth in the band and they couldn’t be more satisfied with the results. “I think Laugh Tracks shows a lot more of us,” vocalist Bryan Garris admits. “The underlying theme of our demo was anger. But with this album, I stopped being angry for the sake of being angry. I had to reach inside of me to get something worthy of an album. “We put this album on a pedestal. We scratched so many songs, so many lyrics—everything had to be a certain standard before we showed it to anyone else. I go a lot deeper, and I get very personal on this album. Sometimes I get very sad on some songs and in other moments I get very angry.”

With vulnerability at the fore, Laugh Tracks is an aggressive album that refuses to be pigeonholed or cornered into one particular subgenre, which is exactly what the band intended. “To be honest, we’re down to do anything,” Garris continues. “I don’t want to sound cocky by any means, but we’re not really afraid to do anything. We’ll play our music on a pop-punk tour, a hardcore tour or whatever.

“Our band is kinda sandwiched between hardcore and metalcore, and a lot of people are very strict with subgenres for whatever reason,” he adds. “Knocked Loose doesn’t pay attention to that. We like it all: You can call us a hardcore band, you can call us a metalcore band, you can call us whatever, it’s not a focus for us. When we started touring, we intentionally made it hard to put us in a box. We went out in January 2015 with a band called Vice who were very much a hardcore band. Yet in February, we went out with Kingmaker, who were very much a metalcore band. On those tours, we played the same cities but we were playing to different kids, and when we came through again months later, we had both those crowds at the shows. That’s our outlook: We’ll do any tour that’s a cool tour, no matter what band is on it. You could see us playing with anyone.”

Hear the album for yourself below, and be sure to let us know what you think in the comments. If you like what you hear, you can preorder the album here.

You can catch Knocked Loose supporting Stick To Your Guns on the Better Ash Than Dust tour. Check out dates below: