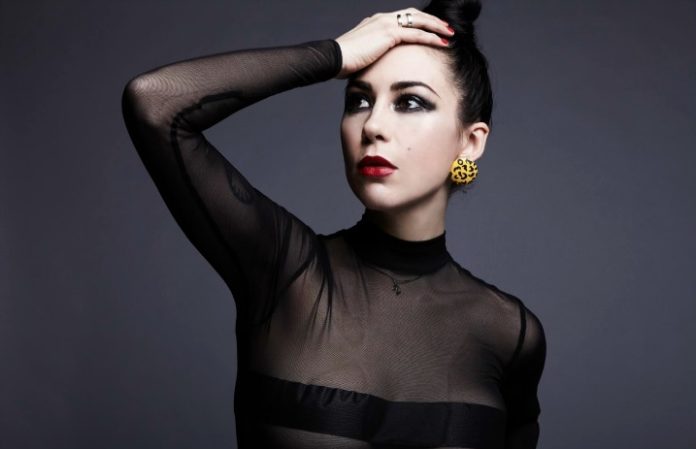 Plenty of bands draw on '80s new wave and synthpop for inspiration, but few do so while also crafting songs as solid as Kristin Kontrol, the project of Kristin Welchez, best known as the maestro of lo-fi garage-pop act Dum Dum Girls. X-Communicate, Kristin Kontrol's debut, is keyboard-driven pop of the finest vintage, married with modern-sounding production from Kurt Feldman (who has his own synthpop project, Ice Choir) and Andrew Miller (who played guitar in the Dum Dum Girls’ last incarnation). Songs encompass classic alternative rock (the New Order-esque “Show Me”), lush ballads (the Smiths-kissed “What Is Love”), dancefloor percolations (“Skin Shed”) and gothic-tinged pop (“Face 2 Face”).

Although X-Communicate does contain vestiges of Dum Dum Girls' sound (“Drive The Night” winks at girl-group harmonies and a '60s-rock vibe), it's a clean sonic break from that band's sound and aesthetic. (Fans of Berlin, Kate Bush and Siouxsie And The Banshees will find much to love.) For Welchez, retiring the Dum Dum Girls moniker was an important move, allowing her to release different-sounding music and not have it side-eyed because it didn't sound like her long-time band. Kristin Kontrol, in other words, let her “take that control back as to how I was putting out music—and, if nothing else, not giving power to something else dictating what I could and could not do.”

Prior to heading off on tour with Garbage, Welchez spoke to AP about finding her songwriting balance using keyboards and how Kristin Kontrol came to be.

Why was now the right time for you to assume a new moniker and start releasing music?
There were quite a few things that went into the eventual decision to do this, although the final, “Okay, it's going to come out as sometime entirely different—new name, etc.” happened very much at the last minute. Me, my label and my management were weighing the options, what to do with this thing. Ultimately, this was going to be my eighth proper release for Sub Pop. Just in the last couple of years, most notably after my last [Dum Dum Girls] record, Too True, I started feeling like I'd kind of hit the ceiling. I've always tried to make progress between records, but the context that Dum Dum Girls was viewed in, and the archetype that I'd started it with, had really solidified in a way that was beyond malleability or beyond my control. I was starting to feel like there were certain moves I wanted to make that I didn't feel like I could. Or if I did, how they'd be perceived would be contextualized by like, “Is it appropriate for Dum Dum Girls?”

“I did really feel like I had painted myself into a corner, and that the aesthetic of Dum Dum Girls [was] starting to be preventative instead of encouraging.”

In the end, what did assuming this moniker let you do as a songwriter and musically that you felt you couldn't do with Dum Dum Girls?
The first thing to address is that it's not an assumption of a new moniker. If anything, for me, the whole thing is about being able to free up or incorporate a fuller or whole-body experience of what I love in music and art. Dum Dum Girls started to feel, like I said, like an archetype. Even if I was trying to branch out sonically, it was still going back through this filter, whether on my side or on the outside, of an all-girl, retro, guitar, lo-fi thing. While that was definitely appropriate and something I was really psyched about for many years, the sonic side of things started to get me down. Where it'd be like, “This is not garage rock” or “This is not lo-fi at all.”  It was things like that. I did really feel like I had painted myself into a corner, and that the aesthetic of Dum Dum Girls [was] starting to be preventative instead of encouraging.

As a creative person, an artist and a songwriter, it's a terrible position to be in, to have this group and realize, “I can't go anywhere with it. ” It’s not like it's your fault or anything—it's just one day you wake up and go, “How did this happen?”
I know to a large degree how it happened. If you start a band with a pretty severe aesthetic but not a lot of intention, you don't really see how each step you take is going to play it forward. In spite having zero interest in being the kind of band that puts out a canon like the Ramones—which, by and large, are a favorite band of mine and are so good, all those records are great—I don't have that staying power to really remain faithful to a sound. I don't have the discipline or something. [Laughs.] I'm not good enough to be that consistent. For me, I need to move forward or I get bored.

“I had to try all the things that weren't working to realize how to take a big step from how I used to work.”

As you were writing the songs for the Kristin Kontrol record, what was the most gratifying thing for you as you realized you were going to step forward and do this?
I didn't know this is what I was doing. I knew I wasn't going to worry about it. I knew I was going to aggressively shake up how I did things because I really didn't want to do anything how I had already done it. For me, that meant working with new producers. I have worked with Sune Rose Wagner from the Raveonettes on six of my records, and then him and my manager Richard Gottehrer have been on all my records with Sub Pop, with great success. They're both geniuses; they've been so incredible to work with. It's not difficult to recognize that if you want to do something truly different, you need some new blood in there.

After I finally wrote a song that made the record, and I see how vital that [period] was, because I had to try all the things that weren't working to realize how to take a big step from how I used to work. Which ended up being a bit more less black-and-white about it. I brought the guitar back in. I recognized that in terms of where my songs could go without much work, the guitar was much more conducive to that, but I could then take guitars out and put in other instruments and sort of achieve the thing I was looking for, which was expanded songwriting but ultimately still a good pop song at the root of it. Writing only on piano, I was still not there yet.

What was the turning point for you after you struggled to write the songs on keyboards? When did things finally click for you, and you realized, “This is working. I can still do this.”
It was when I realized I needed to bring the guitar back in. I had a particularly difficult day, because I don't think I had realized the guitar thing yet—it was one of those terrible, horrible, no-good, very bad days. It was just the one day where it got to me. I found out my rent was being raised, I decided I hated New York—it sucked the life out of me sort of thing—and just had a shitty day. I had to go to bed, had to sleep it off. In the morning, I went out, found another apartment, [and] I asked my friend if I could set up my studio in his apartment for a change of scenery. I decided to write for guitar again. It all happened in the next couple days.

I went to my friend's house while he was at work, walked through Central Park from the Upper East Side to the Upper West Side, walked by the Dakota, had a little [John] Lennon thing, got to his place, sat down. This line popped into my head, which was the name of a band, a Swedish post-punk band I like, called Love Is All. It was graffiti somewhere around the East Village, and it said something to that effect [of] “love is all” or something like that. It really stuck with me. I called up that memory and wrote around that. The pace of that song [“Going Thru The Motions”] is me walking around New York—half-present, half-drifting—and then rooted by that vision of the graffiti above me. That was a huge turning point—and if nothing else was a boost in confidence, an “Okay, I can still do this, I haven't lost it.” alt