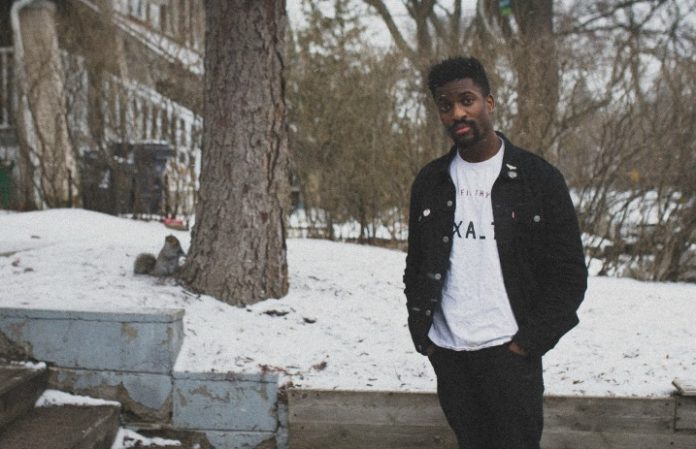 Kurt Cuffy, 24, calls Toronto home— that is, when he's actually there. These days the photographer spends most of his time on the road, photographing bands, making friends and hunting down the dankest of memes. You might have seen him quickly jumping from one side of the stage to the other in Sometown, Middle America, on last year's Common Vision Tour with Every Time I Die and Real Friends. But now, Cuffy has set out on the six-week North American leg of the World Tour, hired by his pop-punk pals in Like Pacific to document their journey.

How did you start taking pictures?

I took money from a tax return and bought a camera. That was two years ago—May of 2014—and it’s been insane. Starting-wise, I don’t like to say I “networked,” but I used contacts from my previous band [Longshot] in my favor of getting backstage and brought my camera with me. [I was about] showing everybody that I could do it, and that I wasn’t just another dude with a camera.

How do you get on tour with a band? As a photographer, what do you have to offer them?

Basically you’re trying to sell yourself to the band—why you should be out on tour with this artist. You’re going to be their social media coordinator, pretty much. You’re going to make sure they have pictures every day. They don’t want to take pictures and selfies all the time. Try your hardest and message every band—the worst they can say is no.

How important is it for you as a photographer to have a good online presence? What sites do you use?

Oh, huge: Instagram is the new bee’s knees, everyone’s using it, I’m trying to tweet a lot more and Facebook is a lot bigger than I thought. As soon as I realized that I started posting a bit more, using my Instagram, making weird contests, like “this picture’s exclusive to Instagram for an hour” and it actually worked. You have to do all of them. If you’re everywhere, then you’re in everyone’s minds for tours and photoshoots. My take is: Be everywhere at once or nowhere at all.

Have you ever had your pictures used without proper accreditation or acknowledgment and what’s the best way to handle that situation?

Yeah, I totally have! It sucks every time. I’m pretty passive about everything but that used to annoy me to no end. I realized most of the time publicists don’t pass it on to the bands and they’re just posting for socials. Rather than staying mad, I just stay grateful that they even chose my picture to post.

Do you have any tips or tricks for actually shooting on stage and in the pit that you’re willing to share?

My main advice for shooting a pit, as lame as it sounds, is to just have fun. Secondly, get a camera and a lens that can handle low light situations. I survived on the Common Vision tour with one lens, the Sigma 35mm 1.4 Art. If you’re going to be shooting in photo pit keep track of how many songs you have left. Do your research, listen to the band’s record and maybe watch a live set so you know what to expect from certain members—that will give you a giant one-up on other photographers. Move fast and focus on what you’re doing. If you see everyone shooting the vocalist, go shoot the guitarist. I like to be where the other photographers aren’t. Look for those in-between moments and crush them.

Catch Cuffy on the road this Spring in a town near you and follow his vlog, “My Life As A Music Photographer,” on YouTube  for more road stories and behind-the-scenes tips.