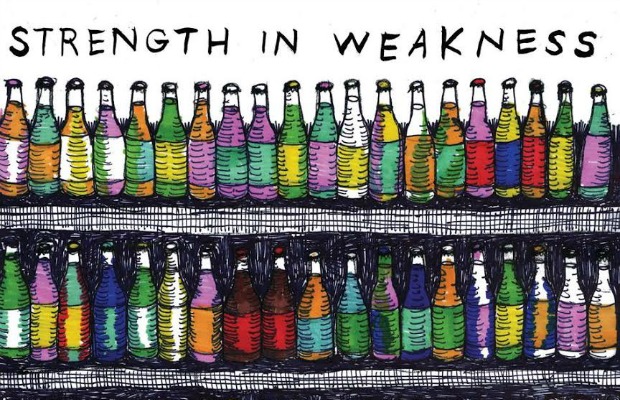 Roughly a dozen releases into its lifespan, Philadelphia's Lame-O Records have officially launched a charitable project in the long-storied spirit of punk giving back. Their new compilation, Strength In Weakness, continues in the tradition of Sub City Records' Take Action! tours and compilations for teen suicide awareness and Vagrant Records' excellent In Honor: A Compilation to Beat Cancer. Proceeds from Strength In Weakness (soon to be released digitally and on vinyl, with all physical copies already sold out from pre-orders) will benefit the Philadelphia chapter of United Cerebral Palsy, an organization that provides community services to individuals living with disabilities.

The compilation was inspired by James Cassar, a longtime Lame-O supporter who is living with cerebral palsy. “[He’s] a very close friend,” says Lame-O co-owner and publicist Emily Hakes. “James has always loved us, supported our releases and been really kind to us as we try to keep moving forward.”

While Hakes did consider making Strength In Weakness an all-star shortlist of bands from outside Lame-O's hometown headquarters, “the ones we most wanted involved with this project were from Philly,” she says. “As the lineup started to fill up, we kind of came to the conclusion that we would keep everything local.” The label could send the bands into recording studios more easily and more reasonably maintain their intent to donate the money to a local chapter.

The compilation boasts a relative who's who from the overlapping worlds of contemporary punk, emo and indie rock in the Philadelphia area, from Modern Baseball's storytelling to Spraynard's Latterman-inspired shout-alongs or Beach Slang's heart-on-sleeve '90s alternative rasp. For Modern Baseball, one of the most popular bands featured on the compilation, the decision to contribute was “absolutely a no-brainer,” according to frontman Brendan Lukens. Modern Baseball became great friends with Cassar this past year, and the band's beloved full-length debut, Sports, was also Lame-O's first release. Strength in Weakness will also allow Modern Baseball to appear on the same album as some of Lukens’ favorite current acts and tourmates. “It's just funny 'cause we don't see ourselves as the 'headlining band' in this split, just because we love all the other bands so much,” he says, citing touring history and a previous split with Marietta, as well as a recent tour with Beach Slang. “They are some of the most talented and inspiring people to be around,” Lukens says of Beach Slang, who close the compilation with a wistful acoustic take of “Too Late To Die Young” from their upcoming full-length. Then there's Spraynard, who Modern Baseball have long looked up to. “When we were first starting to play full-band shows, we could only dream of playing with them,” Lukens recalls. “Now having the opportunity to tour with them and have a release with them kinda seems unfair.”

Spraynard themselves are debuting some of their first new recorded material since announcing their reunion in April 2014, picking up where they left off from their 2012 breakup with the bouncy “Haulin' Oats.” “We threw it together amidst touring last summer,” drummer/vocalist Pat Ware, aka Dos, explains, “so it felt natural writing something that sounded similar to our older songs.” The track continues the band's positively quirky aesthetic, something that stands in delightful contrast to their socially aware ethos. “We get to play music and are lucky enough that people support it,” Ware elaborates. “If their support can also aid an important cause, that's too powerful an opportunity to ignore. It's always been important to us to take advantage of having a voice. There is fucked-up shit that goes on every day and we have the privilege to address it rather than ignore it. At the same time, Dumb And Dumber is the greatest film of our generation, and I'm not going to ignore that either.” Spraynard fans may want to bask in the uptempo glory of “Haulin' Oats” as long as they can, with Ware cryptically referring to a new full-length they're currently in the thick of recording as “hippie shit, because we're old now.”

In any event, there's plenty to like or love on Strength In Weakness despite its short runtime, with the Weaks' scrappy power-pop, Hurry's snappy indie rock and Marietta's mid-tempo, emotive burn filling out the album and giving its meaningful intent some musical strength. Hakes certainly hopes this isn't the last time Lame-O assembles something like this. “I think it's really important to give back more than you make,” she stresses. “There's something really thrilling about being able to do a big project like this for an amazing cause and I hope we get into a pattern of non-profit projects as we continue.” alt

Below, we have the exclusive stream of Spraynard’s contribution to the comp, “Haulin' Oats.” Pre-order 'Strength in Weakness' digitally and physically.