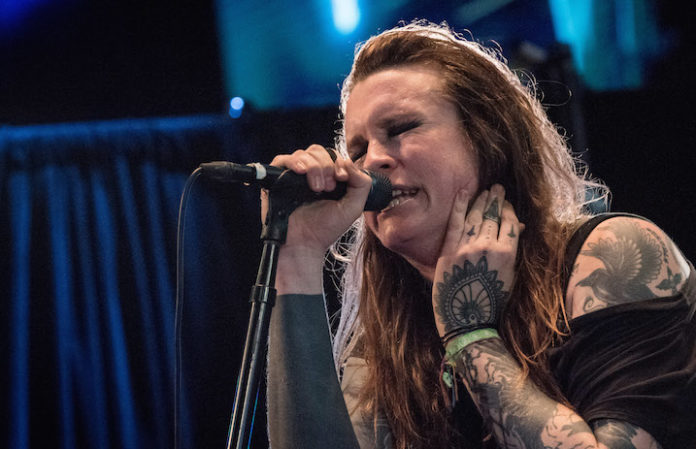 Just because she’s taking a break for one day from her tour with her band, it doesn’t mean that Laura Jane Grace is setting aside her role as an activist, hoping others will reconsider how they understand gender and perhaps even expose their children to broader ideas of gender inclusivity. Grace will perform at the event Genderful: Exploring Gender Through Art on Oct. 14 at the Brooklyn Public Library. According to the description on the library’s events page, Genderful intends to provide a space for children ages 6 through 12 to explore gender identity — what it means and what it means to them — in a safe and artistically stimulating way.

When Grace hopped on the phone with AP, she not only explained how she teamed with If You Want It, Ltd., but also why an event like this matters. “I’ve had a long-developing relationship doing work with If You Want It, formerly known as ‘Gender Is Over,” says Grace. “I really appreciated If You Want It as a good place to divert my energies and activism and fundraising. I like that it’s not always focused on the same organization; it’s kind of switching around and always helping different trans or genderqueer-related organizations,” she says.

Grace also explained why she felt like Genderful was a different, new kind of event in regards to how it offers younger children an outlet to talk and explore. “Outside of my day job of being in the band I’m in, I’m also a parent. I always speak about my opinion that a lot of ignorance and bigotry and prejudices in the world stem from people being uneducated on certain things, and gender is a subject that most people are completely in the dark on,” Grace notes. In her opinion, she’s realized that her unique life experience as a trans woman has pushed her into new, albeit uncomfortable, public territory, but that it’s become crucial to use her own voice to help others (in environments such as schools) get a better understanding of gender identity.  “It’s something I’ve definitely realized, from being a parent and being involved with my daughter’s school and the atmosphere there. There’s misunderstandings people have around having a transgender parent present. So, trying to do things [like the Genderful event] or reach a broader age group is almost self-serving in that way [because] I’m doing that as a parent, kind of separate from the band thing.” Essentially, finding a different avenue to create an open dialogue with others about gender identity has become, in Grace’s experience, beneficial to the broader dialogue around how society understands and accepts another person’s gender identity. Feeling that duty has, it would seem, put Grace on a track she never expected, one with its shining moments as well as its bumpy patches. What’s clear is that starting a conversation with others is never easy, but it is necessary.

“You know, from my experiences as a transgender parent going into an education environment, like going into my daughter’s school and not having people understand what it means to be transgender, I realized that there was this feeling of like, ‘Oh, it’s on me to educate them.’ At first, I realized that, and after a second, I was resentful of that,” she explained. “If like, ‘Well it shouldn’t be on me to educate them. I’m just a parent and this is my kid going to the school, you know?’ I shouldn’t have to go into some kind of school-parent meeting where all the parents are there and the kids aren’t there and have to explain to all the parents what being transgender is and have to out myself.”

But Grace revealed that being thrust into that uncomfortable position—while certainly having its low moments—ended up illustrating to her the power of her voice and her specific life experiences. “But I had that experience where I was outed at a school meeting and people are sitting there debating things about being transgender that they were completely ignorant on. And it shouldn’t be on the parents’ shoulders. At the same time, I do do what I do, and for the past couple years, I’ve been going to universities and getting paid to speak on the subject of gender. So it’s this weird realization: This shouldn’t be my responsibility, but it’s also kind of what I’m already doing.”

It’s Grace’s conclusion about unwittingly becoming an educator and trusted speaker of sorts that speaks loudest of all. “So on the one hand, as a private citizen [and] parent, I don’t want that responsibility; but on the other hand, because I do what I do, it’s like, ‘Okay, I can make a difference in that way.’” Events like Genderful might not be the way Grace planned to spend her time when she wasn’t performing, but it’s clear she loves the work she is doing. Better still, it’s clear this kind of work could have a more positive effect for those who are open to engaging on this very important topic.

The Genderful event takes place Sat., Oct. 14 at noon at the Brooklyn Public Library. For more information, visit their website.